1890: Washington state’s “coat of arms” coulda been a contender

A helpful editorial suggestion for a new, improved (because humorous) use of Chinuk Wawa in official symbols of the new state of Washington: 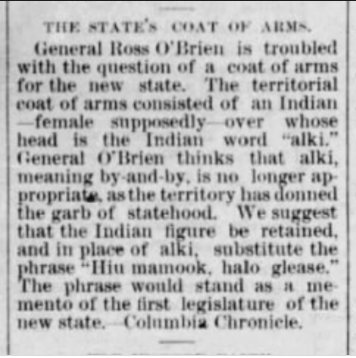 THE STATE’S COAT OF ARMS.

General Ross[ell Galbraith] O’Brien (1846-1914) is troubled with the question of a coat of arms for the new state. The territorial coat of arms consisted of an Indian — female supposedly — over whose head is the Indian word word “alki.” General O’Brien thinks that alki, meaning by-and-by, is no longer appropriate, as the territory has donned the garb of statehood. We suggest that the Indian figure be retained, and in place of alki, substitute the phrase “Hiu mamook, halo glease.” The phrase would stand as a memento of the first legislature of the new state. — Columbia Chronicle.