Just post-frontier, an interesting initiative to translate the names of popular Settler dances…

This is from one of those Pacific NW “fraternal societies” that so often made use of Chinuk Wawa in their activities.

The spellings that are used depart from the de facto standard of the era’s published Chinook Jargon dictionaries, so they look like the work of some genuine oldtimer. 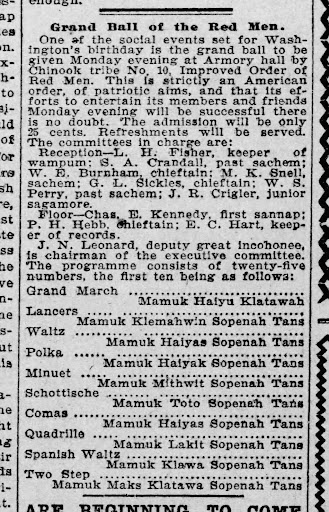 Grand Ball of the Red Men.

One of the social events set for Washington’s birthday is the grand ball to be given Monday evening at Armory hall by Chinook tribe No. 10, Improved Order of Red Men. This is strictly an American order, of patriotic aims, and that its efforts to entertain its members and friends Monday evening will be successful there is no doubt. The admission will be only 25 cents. Refreshments will be served. The committees in charge are:

J.N. Leonard, deputy incohonee, is chairman of the executive committee. The programme consists of twenty-five numbers, the first ten being as follows:

Even if you aren’t familiar with each of these old-fashioned dance steps, the Chinook looks like it’s giving pretty decent descriptions of them.

(*I don’t heartily endorse the grammar of these expressions, and I don’t imagine that these were “the Jargon names” of these dances.)

In 1897, most people attending the event may have already known those steps.

And it was just after the frontier period.

And it was in good old Jargon country.