1878: “Court of Assize: Before Mr. Justice Crease” is the headline…

This is a court report from frontier-era Victoria, British Columbia, and it involves not only Chinuk Wawa testimony, but better yet, information on which languages each person testifying knew.

The day’s case was a charge of fraud against a White man, Robert Smith, in relation to the murder trial of an Indigenous man known as Toby.

Skipping to the linguistically relevant parts…

Shuloof, an Indian woman, deposed that In July last she received a letter from her husband Toby which was handed and read to her at Nitinat by a priest who brought it from Victoria; the purport of the letter was explained by the priest who said that it was from her husband who was to be tried for murder, telling her to send money down so that lawyers might be employed; she came down to Victoria and showed the letter to “Mac” (Mr. McTeirnan); she paid $30 to the defendant; afterwards spoke to Capt. Laughton who told her that she had paid defendant too much as he was “cultus” [kʰə́ltəs ‘worthless’] and could not “skokum wawa [skúkum wáwa ‘forcefully/effectively speak’];” she paid defendant the money for him to appear at the Supreme court to defend Toby when he was placed on his trial for murder, Toby being her husband; besides the $30 she also paid defendant $14; she was in Court when Toby was tried, but neither defendant nor anyone else that she knew of spoke on his behalf.

A little later in the article, we’re told about witnesses’ language repertoires.

It’s unclear what Toby’s ethnicity or language was, which might have helped us contextualize his son’s lack of Chinook Jargon knowledge and reliance on an interpreter known as Tooka-man — but it looks as if the defense lawyer was at first hoping to directly question him in CJ.

Thomas Laighton, evidently a White man, testified that he’d interpreted the fateful letter’s contents to its Native recipient Shuloof et al., and gave her some advice. He said he had lived among the Native people since 1854, and claimed to communicate very successfully with them in a mix of Chinuk Wawa and at least one Aboriginal language, presumably some words of Ditidatx.

Finally, an Indigenous woman from the Fort Rupert (Kwakwaka’wakw) community, known as Mary, told that she had served as personal interpreter for Shuloof in her dealings with the defendant. Mary claimed a knowledge of “only … English, Chinook, and the Fort Rupert language”, and could not speak Shuloof’s language. 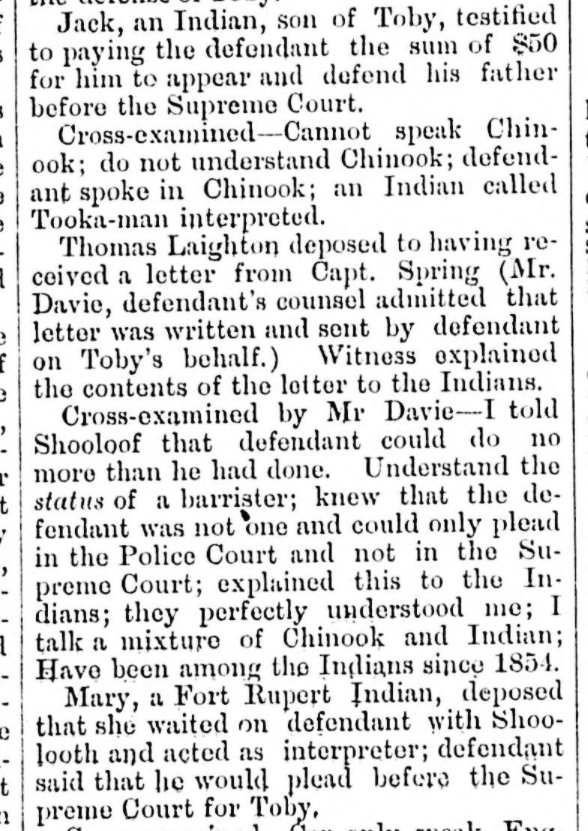 Jack, an Indian, son of Toby, testified to paying the defendant the sum of $50 for him to appear and defend his father before the Supreme Court./Cross-examined — Cannot speak Chinook; do not understand Chinook; defendant spoke in Chinook; an Indian called Tooka-man interpreted.

Thomas Laighton deposed to having received a letter from Capt. Spring (Mr. Davie, defendant’s counsel admitted that letter was written and sent by defendant on Toby’s behalf.) Witness explained the contents of the letter to the Indians.

Cross-examined by Mr Davie — I told Shooloof that defendant could do no more than he had done. Understand the status of a barrister; knew that the defendant was not one and could only plead in the Police Court and not in the Supreme Court; explained this to the Indians; they perfectly understood me; I talk a mixture of Chinook and Indian; Have [sic] been among the Indians since 1854.

Mary, a Fort Rupert Indian, deposed that she waited on defendant with Shoolooth and acted as interpreter; defendant said that he would plead before the Supreme Court for Toby.

Cross-examined — Can only speak English, Chinook and Fort Rupert language [Kwak’wala]. Do not understand Shoolooth’s language.

All of this corresponds perfectly with what we already know of late-frontier Victoria life.

Indigenous people from all over the BC coast spent a good deal of time in that town, and it’s fair to say that that’s because they were participating in the new wage economy.

English-speakers were not yet a clearly dominant demographic force, so folks routinely used Chinuk Wawa both as an inter-tribal language, and between Natives and Euro-Americans.

If you didn’t know CW, you probably were a complete stranger to Victoria, or else lived an unusually insulated White lifestyle.

In other words, for coast First Nations people, knowledge of Chinook diffused outward from “Biktoli” (founded 1843 by the Hudsons Bay Co.), largely via those who had visited and worked there and then returned home. By corollary, Victoria’s the single biggest reason why we find a lot of Chinook loan words in most coastal Indigenous languages.

We can contrast this with the interior-mainland BC situation, where there was no comparable “Chinook metropolis” for a few decades into the era of intense Indigenous contact with Euro-Americans, 1858+. Instead, Interior folks’ knowledge of the Jargon was at first mainly propagated through dealings with Whites as individuals or at most in small groups of prospectors, ranchers, and so on.

Of course, there was one region where there was a good deal of exposure to both of the above categories of Chinuk Wawa-speaking Whites — the “lower mainland” of BC. Indigenous people there (nearly all of them Salish) easily traveled to Victoria in a day or so by canoe, as well as experiencing the gigantic influx of gold-seeking Americans that seethed up the Fraser River.