Picking up partway through 1854 today… 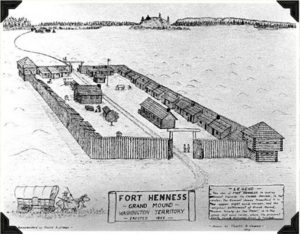 Michael’s mention of “Fort Simpson” Indians visiting Nisqually on page 100 has to mean Tsimshians from Port Simpson (Lax Kw’alaams) near present-day Prince Rupert, BC. On the Pacific NW frontier, there was a lot of confusion between place names starting in “Fort” and “Port”, and I believe the Jargon’s habit of Indigenizing English words (including changing F=>P ) played a role in that. It’s interesting to point out, regarding the Tsimshian people, that they learned excellent Jargon when they made these long journeys to the south to trade  — but CW made very little impact on the Tsimshian languages in turn. Folks in their territories seem to have the unusual history of learning English relatively fast and fluently, and using it to their own advantage from a fairly early point in contact history.

On May 7, Michael attends a Catholic religious service at (Fort) Steilacoom, unusually enough led by an Indian, who relies on the famous sáx̣ali-stík (“Catholic Ladder”, but literally ‘high-tree; heaven-tree’) chart, on paper in this instance. In this diary entry we first see Michael overtly aware of Chinuk Wawa and its distinctness from “the native language” of Txʷəlšucid/Dxʷləšucid (Lushootseed Coast Salish), and he seems to have understood the CW portions of the service pretty well: 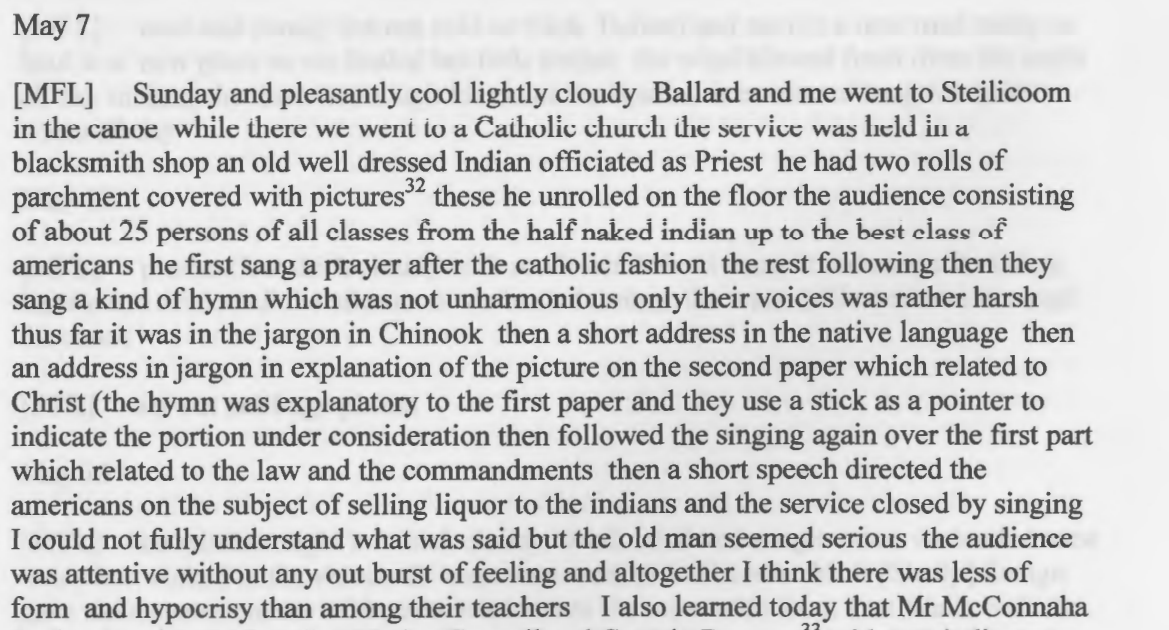 [H]e first sang a prayer after the [C]atholic fashion[,] the rest following[,] then they sang a kind of hymn[,] which was not unharmonious[,] only their voices was rather harsh[.] [T]hus far it was in the jargon[,] in Chinook[,] then a short address in the native language[,] then an address in jargon in explanation of the picture on the second paper[,] which related to Christ[.] ([T]he hymn was explanatory to the first paper and they use a stick as a pointer to indicate the portion under consideration[.)] [T]hen followed the singing again over the first part[,] which related to the law and the commandments[.] [T]hen a short speech directed the [A]mericans on the subject of selling liquor to the indians[,] and the service closed by singing[.] I could not fully understand what was said[,] but the old man seemed serious[;] the audience was attentive…

On September 28, Michael refers to seeing blossoms of the < sallal > bush. Salál is a word of Chinookan origin that’s sometimes said to have been part of early Chinuk Wawa, which would make some sense to me. See the 2012 Grand Ronde Tribes CW dictionary for more about its convoluted etymology.

On January 22, Michael is visiting Grays Harbor, and communicating in quite some detail with the Lower Chehalis Indians, again almost certainly in Chinuk Wawa. He then heads south to Shoalwater Bay, where he meets a number of the earliest Euro-American Settlers.

May 13 has Michael crossing the Black River, which he describes as having many apparently bottomless holes; “the river is black[,] still[,] and no < halo > bottom found”. (hílu ‘none’)

On June 10 he “found lots of Indians digging < Lackamas > roots for food” at Beaver Creek Prairie.

Patterson writes on June 22 of listening to various US Congressional candidates’ speeches; “Some of their talk was < Cultus > nausea < Wa Wa >”! (kʰə́ltəs wáwa ‘worthless talk’)

Michael on July 2 reports, “News — < halo > — except that [Governor Isaac I.] Stevens has gone to Fort Benton on the Missouri to treat with the Black feet Indians”. On July 10 and August 14 and Oc(tober 5 again, he writes “< Halo > news.”

On September 29, he reports “a hairpulling fight” between two Native women; “one of them used enough English to swear with”. This relates to Chinuk Wawa use, believe it or not. I continue to find an association between English-language cussing and pidgin-language speech in western North America, which entirely makes sense: non-English-speaking folks nonetheless picked up whatever words were in prominent use, from Jargon to insults.

On October 3, Michael is discussing the steady buildup of rumors of war between the Native people and < Bostons >. (bástən ‘American’) Here I find one of the earliest occurrences of the phrase “upper Chehalis”, referring to the Indians near his homestead.

October 15 has Michael relaying news from a passing “express to Vancouver” (I guess to the then-US Army fort on the Columbia River) about some traveling Whites, including “some french Catholics from Vancouvers Island” (priests such as bishop Modeste Demers? or perhaps a confusion for Métis from the Fort Vancouver, Washington, area?), being stopped by a large hostile Native group at Nachess Pass.

October 16’s entry by Michael may include a Jargon word not noticed by editor Jablon: he mentions Indian warriors “determined if need be to stand by [1847 settler Sidney] Ford to the last and fight their last on this =Hahe=.” Michael puts English slang between equals signs (makes me think of Krazy Kat somehow), and here I think he probably wrote the CW-derived < illahe > ‘land; earth’. (ílihi, íliʔi) Notably, these Indian neighbors are relatives by marriage, and close friends, of Ford’s, and the Luark brothers express intense loyalty to them, with Patterson on October 17 going on at some length to say that he thinks it’ll be purely destructive to good relations to build Fort Henness on Mound Prairie; on November 13 he even mentions that the “friendly Chehalis Indians were collecting and delivering up their arms”.

By the way, Sidney Ford operated a little hotel at < Skookumchuck > on Ford’s Prairie that was known as the “< Skookum > House” …  this may have been a jokey pun between “Skookumchuck House” and skúkum-háws ‘prison’!

An early occurrence of the phrase “a Chinook canoe” is on October 23, from Michael. Interestingly, he makes a journey around this time to northern California’s Smith River, Crescent City, and the Klamath River gold mines via the coast, meeting Indian people in various places; I bet he used his Jargon knowledge with many of them.

Michael’s November 3 entry from that region mentions his staying at a shack “called the Siskin Mountain house”, at least as Jablon has transcribed his handwriting. This has to be < Siskiu >, an alternate spelling of the word < siskiyou > ‘bob-tailed horse’, which is the subject of much vexed arguing in CW history…

On July 4, Patterson notes having spent the day in various activities including “getting two < Comux > at Goodells”. (kʰámuksh ‘dog(s)’)

On page 264, footnote 10 quotes a book on Centralia history to tell us that Upper Chehalis elder Silas Heck remembered that it was his father Koolah (Koolah Yuanan) who fired the shot noted in 1856 by Patterson in a false alarm during the war scare: Koolah told Sidney Ford Sr. that an owl had been killing Ford’s chickens, and Ford told him to go ahead and “< Mamook pooh >“, translated here as ‘shoot him’. (mamuk-p’ú ‘to shoot’, perhaps with the CW “silent it”)

← ‘Berries’ and Salish, too?
A couple reasons for “kopa yawaa” in northern CW →