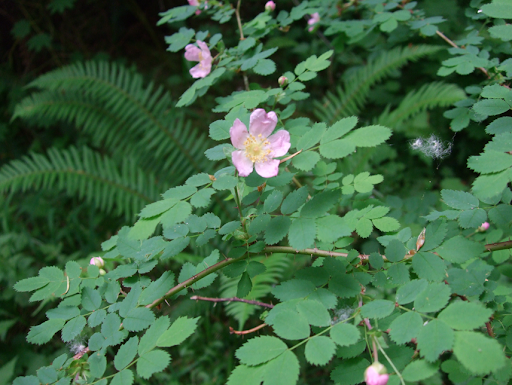 Here’s what I consider a probable Canadian French discovery in the Fort Vancouver region — and yes, I suspect it must be a Chinuk Wawa word new to us.

The following is from a paper I wrote recently; the full references are available on request.

Recorded by anthropologist Erna Gunther, who puzzlingly comments (1973:34), “Only the Chehalis have a name for this rose [Rosa gymnocarpa Nutt. Wild rose], “upsaynt”, and even they do not use it.” Her transcription habits are approximately Boasian, so the phonetics implied are [ʔʊpsaynt], phonemically /ʔəpsaynt/. (Stress unknown.)

I have not found a Salish cognate for this (cf. Kinkade 1991:280 and Proto-Interior-Salish *s-kʷəkʷaw̓ ‘rosehip’ Kuipers 2002), but if it is a loanword it may refer to flora from another bioregion.

Sahaptin (a language unrelated to the above) < pshxú > ‘sagebrush’ is a rough but poor match, but it raises a different promising parallel.

Note that herbe sainte, lit. ‘holy plant’, conceivably was indeed extended by the early francophone Métis colonists of the Puget Sound Agricultural Company in the Cowlitz-Nisqually area (Jackson 1995:126, 171) to the rose, associated in Catholic tradition with the Virgin Mary, Sainte Marie (cf. Warner 2013:102).

Compare the French phrase’s use for other North American herbs that, like sage, are prominent in medicinal use, including sweetgrass (Barkworth et al. 2007:762) and tobacco (Hodge 1912:768).

Sagebrush, as a native of the interior regions across the Cascade Mountains, is thus indeed foreign to Up territory (USGS 2018). Cf. its absence from Gunther (1973) and from Coast Salish dictionaries; Interior Salish words for ‘sagebrush’ are of different form and transparent etymology, e.g. Spokane q̓ʷl•q̓ʷl=mn=éłp, lit. ‘roast•REDUPLICATION=INSTRUMENT=plant’.

As virtually no direct French-to-Salish loans are known in regional tribal languages without being also known in Chinuk Wawa, this may be a previously unknown CW term and one of the few from multiword French phrases, cf. < tapahote > ‘shame’, perh. from < t’a pas honte > ‘you have no shame’ (Lang 2008:157).