Hey! I thought my name is 大卫! (Image source: chineame.com)

“Hybrid denizens”–! Why, that’s got Chinuk Wawa written all over it–!

So squarely in the frontier era, you can bet a Victoria paper managed its own hybrid of squeaky-clean Queen’s E with down ‘n’ dirty CW.

In just one paragraph, this article delivers quite a dose of untranslated Chinook Jargon and vivid intercultural contact: 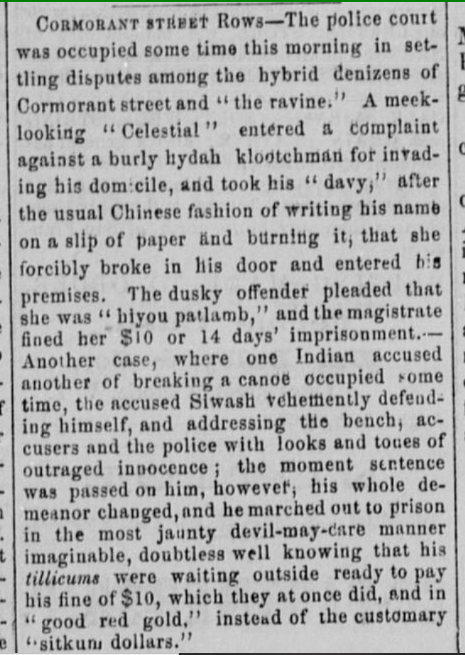 CORMORANT STREET ROWS — The police court was occupied some time this morning in settling disputes among the hybrid denizens of Cormorant street and “the ravine.” A meek-looking “Celestial” entered a complain against a burly hydah [Haida] klootchman [woman] for invading his domicile, and took his “davy,” [affidavit; swore under oath] after the usual Chinese fashion of writing his name on a slip of paper and burning it, that she forcibly broke in his door and entered his premises. The dusky offender pleaded that she was “hiyou patlamb,” [much drunk] and the magistrate fined her $10 or 14 days’ imprisonment. — Another case, where one Indian accused another of breaking a canoe occupied some time, the accused Siwash [Indian] vehemently defending himself, and addressing the bench, accusers and the police with looks and tones of outraged innocence; the moment sentence was passed on him, however, his whole demeanor changed, and he marched out to prison in the most jaunty devil-may-care manner imaginable, doubtless well knowing that his tillicums [friends] were waiting outside ready to pay his fine of $10, which they at once did, and in “good red gold,” instead of the customary “sitkum dollars.” [half-dollars]