A Lord’s Prayer that giveth, and taketh away!

This looks like the prayer as some central Washington late pioneer-era Settler learned it from Gill’s ultra-popular dictionary, perhaps as long as a quarter-century earlier — because it’s got some really weird additions. 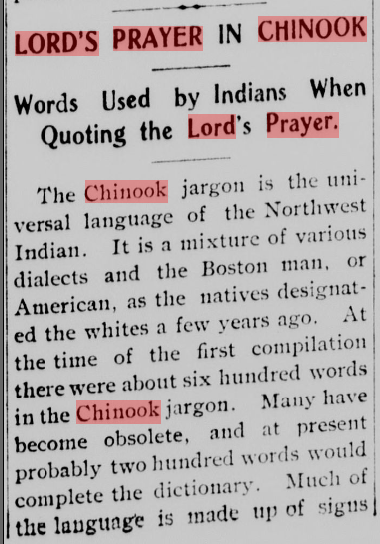 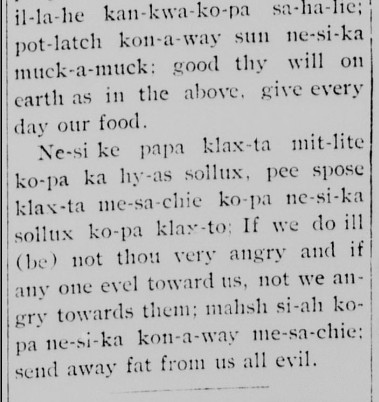 Words Used by Indians When Quoting the Lord’s Prayer.

The Chinook jargon is the universal language of the Northwest Indian. It is a mixture of various dialects and the Boston man, or American, as the natives designated the whites a few years ago. At the time of the first compilation there were about six hundred words in the Chinook jargon. Many have become obsolete, and at present probably two hundred words would complete the dictionary. Much of the language is made up of signs and without them the words alone often express nothing. The jargon has been of great service to pioneers and missionaries who were compelled to travel among the various tribes in early days. Now the Indians talk as ordinary white men, and manage to make themselves understood to all, whether they know the jargon, or the words of foreign tongues. One of the interesting relics of the jargon is the Lord’s Prayer, as given and interpreted with each paragraph or part of a sentence:

* A more literal translation of the informant’s differing (and sacrilegious?) text: ‘Our father who is in where (there is) great anger, and if someone (is) evil to our evil to someone.’

I see quite a number of indications here that some respected local elder of the Settler community provided this unique remembered version of the prayer to the newspaper’s editor.

It  looks like a very interesting bit of local Chinuk Wawa culture.