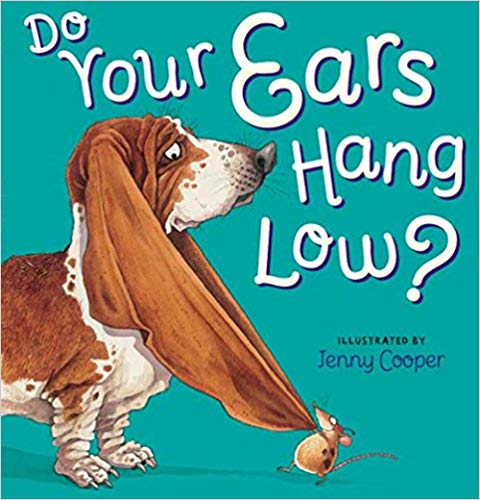 What I’m learning in working on this mini-series is, each song is requiring quite a bit of commentary…

…So today, here’s one more, with some fairly rich lessons drawn from it. 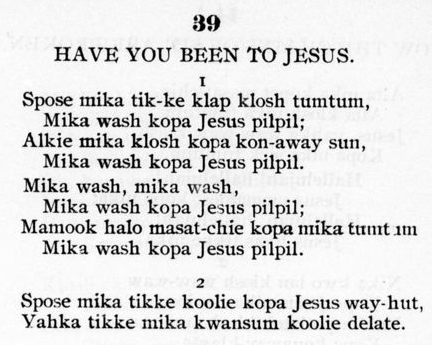 HAVE YOU BEEN TO JESUS.

Comments on the above:

t’łáp (t)łúsh-tə́mtəm, [1] is highly fluent BC Jargon. Expressions of entering into an emotional state, such as ‘getting happy / becoming happy’, are formed with t’łáp ‘get; find’ instead of chako ‘(be)come’.

mayka wásh kʰopa djísəs* pílpil; [2] is, on the other hand, kind of unclear when you consider the repetitive chorus and the original English lyrics below, which are yes/no questions, whereas this clause reads more like a declarative statement: ‘If you want to become happy, you’ll be washed by Jesus’s blood.’

djísəs pilpil [3] and djísəs úyx̣at [3] are still more examples of the unusual possessive construction without yaka ‘his’, which we find referring to very important people. When ‘Jesus’ is the possessor, I tend to suspect English-language influence, as formal registers of the language including those used in hymns tend to say the 2-syllable [djízəs], not a 3-syllable informal [djízəsəz].

mamuk hílu masáchi [4] can be mildly puzzling when it comes to analyzing its grammar. Are we looking at mámuk ‘make; commit’ + hílu masáchi ‘no sins’? Or is it mamuk-hílu-masáchi ‘make (it) sin-less’, where mamuk has developed into the “Causative” marker? In the latter case, we’d expect a direct object mayka tə́mtəm instead of this kʰopa mayka tə́mtəm. On the theory that these missionaries’ Jargon tends to be less complex than some others’, I suggest the former view, while pointing out that (A) we’d normally expect the negator to precede the entire verb complex, thus hílu mámuk masáchi ‘don’t sin’, and (B) this odd placement of hílu once again brings a whiff of English-language influence into these translators’ Chinuk Wawa.

yaka tíki mayka kwánsəm kúli dəléyt [5] strikes me as less than fluent Chinook Jargon, because it’s missing one tiny but important word, pus. That’s the “subjunctive” or “irrealis” clause introducer, normally used to express that some subject ‘wants’ somebody else to do something. So we’d expect yaka tíki pus mayka kwánsəm kúli dəléyt, ‘He wants you to always travel straight.’ Leaving out this little word is most typical of English speakers’s CJ use, in my experience, seemingly relating to the lack of a clear subjunctive mood in spoken English dialects. I’ve both taken and taught college-level English and other language courses, and it’s typical that folks who grew up talking English don’t easily grasp the idea of a subjunctive. CJ, like so many languages, has such a grammatical distinction nevertheless.

I see a significant degree of interference from the English language in this hymn lyric. It most frequently intrudes where the missionaries’ grasp of Chinuk Wawa grammar seems shaky. Nonetheless, they clearly had learned pretty decent Jargon, and their intended meaning is usually clear enough, thanks partly to the brevity and repetitive structure of the hymn texts.

This song was actually preserved for us in an audio recording made in the 1950s. It’s to a tune that I only knew as a silly kids’ song, “Do your ears hang low / Do they wobble to and fro…’ (And obscene variants.) The 1950s recording, like so many of folk songs, likewise has lyrics diverging from the above ones suggested by the missionaries. At some point in the future, I’ll write more about it.

Compare the above with the original English lyrics (as usual there are more, by the way, than the missionaries translated) :

Are you walking daily by the Savior’s side?
Are you washed in the blood of the Lamb?