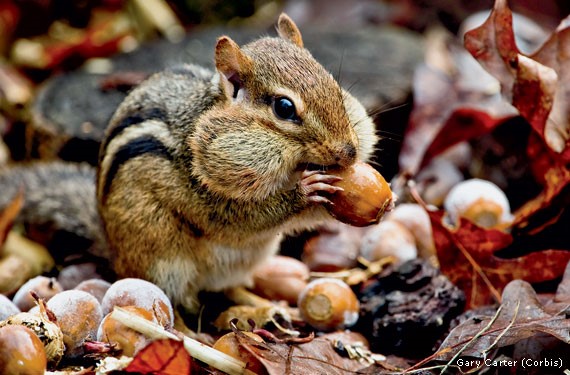 Let’s see how it goes… 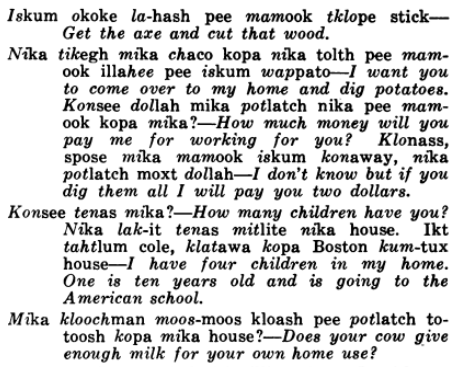 Comments on the above:

kʰə́ltəs [1] nayka tíki(x̣) nánich: Here, kʰə́ltəs is being used as the adverb ‘for no special purpose’, which helps you understand how — on the lower Columbia River and especially at Grand Ronde Reservation, Oregon — it became the word for ‘only; just’. If LBDB had intended the latter meaning, I’d expect her to have written < kopit >, which was the normal Settler and northern-dialect word. Having said that, it’s interesting to contemplate that LBDB’s childhood home, Steilacoom, was in fact more like an outpost of lower Columbia River settlement at the time than a part of the eventually separate, northern, identity of Washington.

mayka tíki(x̣) [2] nayka mamuk-wásh… : Where that [2] is sitting, I’d expect a fluent speaker to use the word pus ‘in order to; so that’, to introduce an essentially subjunctive clause. We can note that in today’s Jargon sample, LBDB never uses that word, whereas she consistently uses < spose > for ‘if’. SEE NOTE 4!!!

səmk’wí* lesəbéyshən* [3] : White folks do pronounce this then-prominent name as “Simco” due to its usual spelling “Simcoe”, but in Yakama Sahaptin it’s as I show here phonetically. The borrowed English word ‘reservation’ isn’t documented elsewhere in Jargon that I’ve experienced, but I fully believe that, being common in local spoken English, it’d find its way into people’s Chinuk Wawa.

dlét łúsh pi [4] mamuk-cháko háyú úlali-s: As we’ve seen previously with LBDB’s speech, she shares a trait with some other pioneers and with the normal usage in certain areas like north-central Washingon, of substituting pi for the old, expected subordinate-clause marker pus. SEE NOTE 2!!!

nayka ískam [Ø] [6]: And here’s the “null” 3rd-person inanimate / nonspecific pronoun, which is normal and fluent Jargon. It occurs again later in today’s text.

nayka t’úł* [7]: It’s important to advise folks not to use this word for ‘house’ in their own Jargon, I feel. It was never common and it’s never found in documented sentences, where háws is always used.

kə́mtəks-háws [9]: I’ve written about this ‘knowledge-house’ expression before; it was a genuine early-creolized Jargon term for ‘school’. It isn’t in the usual old Jargon dictionaries, but we have plenty of proof of it in people’s actual usage.

pátłach tutúsh kʰapa mayka háws [10]: This is an odd-sounding sentence to fluent Chinuk Wawa speakers, as pátłach tutúsh = ‘to nurse, to breastfeed’, and kʰapa mayka háws commonly denotes ‘to your house’. It requires doing a doubletake before you can imagine the meaning LBDB intends here, with the typical northern/Settler usage of < kopa > + noun as ‘for’. I feel it would’ve been more clear if she’d said something like < kopa mika tillikums > ‘for your people/family’, or indeed just < kopa mesika > ‘for you folks’.

mayka tə́mtəm háyú kʰúl úkuk kʰúl-ílihi? [11]: There’s a post-frontier era Chinuk Wawa genre of Settlers asking Indians to forecast the weather. All those cowboy-and-Indian movies seem to carry a kernel of accuracy here, as cringe-inducing as the trope can get.  A grammatical note — LBDB’s’ úkuk kʰúl-ílihi, not introduced by any < kopa > ‘in, during, etc.’, is perfectly fluent and normal. The big majority of time adverbs are used without a preposition, e.g. púlakʰli is normal for ‘at night’, sítkum-sán is normal for ‘at noon’, and so on.

kwískwis [12]: Old-school dictionaries have this as ‘squirrel’ and I don’t doubt LBDB knew this word in that sense from childhood. At Grand Ronde it’s specifically ‘chipmunk’. Your mileage may vary.

kʰapa yaka [13] háws: Here LBDB may, or may not, be using yaka (normally ‘his, her’) as ‘their’. It’s impossible to tell, except from her own English translation with ‘their’. Honestly, I lean toward thinking she really meant the singular in her Jargon, as the plural yaka is far more characteristic of later, northern dialects than of her earlier, more southerly one.

Mrs. Downey-Bartlett’s Chinook Jargon is again highly fluent, and generally a very fine model for readers to follow. There are a couple of caveats, as we’ve previously found, where she dredges up some dusty old “dictionary word” that pretty much nobody would understand. And those portions of today’s text suggest to me that this genuine early pioneer speaker was simply a bit rusty at talking Jargon when she wrote this stuff in her sixties. I’d like to emphasize that LBDB’s speech is historically interesting, showing many traits that typified early-creolized (Fort Vancouver) CJ; this makes eminent sense, as Fort V. was the launching point for most of the early newcomers headed north to settle.

Stick around for the next installment in this mini-series…