Taking part in a big post-frontier Pacific Northwest trend, Chemawa Indian School had a school cheer in Chinook Jargon. The twist is that this wasn’t a “yell” to urge a sports team on.

Rather, it was branching out into its own genre of poetry.

This was an elementary-school girls’ club expressing their group identity.

Among the several extracurricular activities available to the students (besides their debate club, which in the same issue of the school newspaper is reported as considering the resolution “Indian Schools should not be abolished”) was the Ramona literary society.

Here’s the whole article on them; I’ll just transcribe their yell. Read below for an analysis of it, and extra background.

Pretty cool to find one of the rare examples of rhyming Chinuk Wawa verse!

Beyond that, the fact that this was a female youth-oriented Native literature club triggered my spidey sense.

When I went researching the meaning that the name Ramona had for them, I found a strong candidate:

Ramona is an 1884 American novel written by Helen Hunt Jackson. Set in Southern California after the Mexican–American War, it portrays the life of a mixed-race Irish–Native American orphan girl, who suffers racial discrimination and hardship. Originally serialized in the Christian Union on a weekly basis, the novel became immensely popular. It has had more than 300 printings, and been adapted five times as a film. A play adaptation has been performed annually outdoors since 1923.

The author, Helen Hunt Jackson, was an influential (and lonesome!) voice agitating to the white mainstream culture in the USA on behalf of Indigenous people. 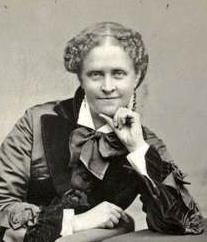 From another Wikipedia article, it seems “HH” may have been partly responsible for turning southern California into a tourist mecca:

Helen Hunt Jackson (pen name, H.H.; born Helen Maria Fiske; October 15, 1830 – August 12, 1885) was an American poet and writer who became an activist on behalf of improved treatment of Native Americans by the United States government. She described the adverse effects of government actions in her history A Century of Dishonor (1881). Her novel Ramona (1884) dramatized the federal government’s mistreatment of Native Americans in Southern California after the Mexican–American War and attracted considerable attention to her cause. Commercially popular, it was estimated to have been reprinted 300 times and most readers liked its romantic and picturesque qualities rather than its political content. The novel was so popular that it attracted many tourists to Southern California who wanted to see places from the book.

All of which I think goes to support the idea that the Chemawa Ramonas named themselves after her work.