Dregs of Chinook Jargon in a Nicola Valley court case

This article begins by referencing “three klootchmen” (note the plural form, influenced by English “women”) as well as the Settler defendants: 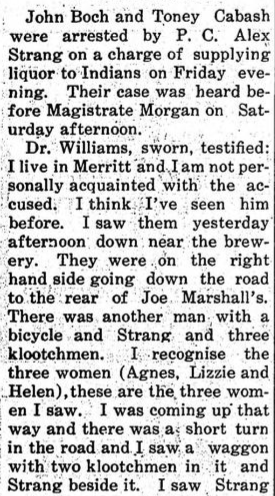 The ladies’ names, incidentally, are identifiable as some of the most commonly bestowed at baptism by local Catholic missionaries, such as Kamloops Wawa editor and Chinuk Pipa (“Chinook [Jargon] Writing” shorthand) inventor Father J.M.R. Le Jeune.

A quotation of a White witness follows, telling that he spoke with these women, almost certainly in Jargon because almost no Settlers spoke Salish and (as we’ll read below) not all of these ladies knew English:

One of them, Agnes, is called as a witness to testify through an interpreter via Chinuk Wawa, as we can infer from the court’s uncommented-upon instruction to her to “make straight wahwah“; that’s clearly mamuk drit wawa (in Chinuk Pipa spelling): 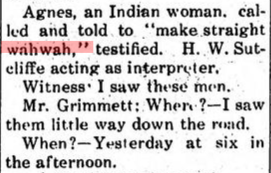 An interesting wrinkle has come in here; the Indigenous woman known as Helen speaks “excellent English” but one of the Settler defendants “does not speak English” (I wonder whether he had used Chinook Jargon to sell the beer to these ladies):

I found all of this of great interest for its concise illustration of a language landscape in rapid evolution.

It corresponds exactly with what I’ve claimed in my linguistics PhD dissertation on Kamloops-area Chinuk Wawa and the Chinuk Pipa literacy: that the Jargon was already losing some of its supremacy by the early 1910s in the BC southern interior, but remained a highly useful tool for communication between ethnic groups, including the most recently arrived Settlers.