Found: a Chinuk Wawa song we didn’t know of before.

I’m not sure who the translator must be.

The most obvious guess for me would be Laura Belle Downey-Bartlett, since she was a toddler pioneer of Steilacoom, Washington Territory before she was famously an Oregonian who published a 1914 selection of Jargon translations of popular songs.

And Downey-Bartlett used spellings and word choices highly similar to what we see below. The grammar of her Chinuk Wawa songs also resembles what you’re going to see below.

I Just don’t have independent evidence that she ever took on the 1868 hit “In the Sweet By and By“.

Are her papers in an archive somewhere, for us to go check?

As always, I’ll let you have a look at the original as clipped from an old publication, paired up with the English original lyrics.

Then, afterwards, I can say a few words reflecting on its Chinook Jargon. 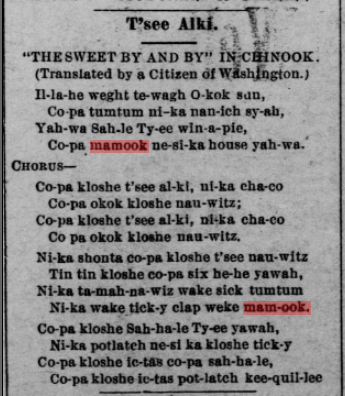 “THE SWEET BY AND BY” IN CHINOOK.

(Translated by a Citizen of Washington.)

I know some of my readers are big on singing and know their hymns. What do you think, is this a singable translation?

Looking at it from my special vantage point as a linguist — thinking of grammar, semantics, and so forth — my first reaction is that it’s unfortunately either a lazy or an unskilled job. One that doesn’t do justice to the power of the original.

It’s inadvertently a specimen of both doggerel and fictional Chinook Jargon.

If I break it down in detail, my reasoning will be easy enough to follow:

[1] wə́x̣t in wə́x̣t t’wáx̣ is evidently meant to form a comparative, ‘brighter’, but this word isn’t really known as a reliable way to do that; instead it reads like ‘again bright’ or ‘still bright’.

[2] úkuk in úkuk sán looks like a good translation — of a misreading of the original English lyric’s ‘than day’ as ‘that day’!

[3] Ø ‘third-person inanimate object’ is a charitable reading by me, which would match the original text’s ‘it’. In the rest of the song I see few signs, though, of the level of Jargon fluency that would be associated with the use of this “null” pronoun.

[4] wínapi* for a future-time adverb, instead of áłqi, is bookish. My asterisk at the end of it shows that we’re not even totally sure of its pronunciation. We have extremely little evidence of it actually being used after the 1850s or outside the lower Columbia River region.

[5] Ø for an existence/location copula (‘be (there)’) is a reasonable parse to make the Jargon version match the English model.

[6] kʰupa as an expression of purpose is normally limited to relative clauses (modifying a noun), as in ‘a hatchet for chopping wood’. So its use instead of pus in this song to form subordinate clauses (modifying a verbal phrase) is odd. Such clunky Chinook Jargon grammar is associated with Settlers, likely influenced by English patterns. See also note 12.

[7] t’sí áłqi attempts to express ‘the sweet by-and-by’ (i.e. ‘the sweet future’), a perfectly okay expression in English, but one that Chinuk Wawa grammar forces you to hear as ‘the candy of the future’!

(The irreverent side of me is hearing two earworms now, most especially Joe Hill’s Pacific Northwest-associated 1911 radical I.W.W. labor-union parody of this hymn, “The Preacher and the Slave” (a.k.a. “Pie in the Sky”; talk about street language!), but also the later hobo-folk/country tune “Big Rock Candy Mountain“! Someone please translate those into Jargon.)

[8] náwəts* for ‘shore’ (núch in the Grand Ronde Tribes 2012 dictionary) is quite a rare word. Again, it’s one that’s only typical of earlier times on the Lower Columbia, and a speaker in Mason County, WA could only have known it from books.

[9] náyka:  here and throughout the Jargon translation, the pronouns for ‘I/me/my’ and ‘we/us/our’ are freely jumbled. This sort of confusion is another disfluency typical of English-speaking Settlers.

[10] shánte*: I put an asterisk here to point out that we’re not totally sure how to pronounce the translator’s spelling < shonta >. Settlers whose first language and main literacy was English were known to use a word-final “A” to show the sound /e(y)/, which I believe is more likely than a schwa sound /ə/.

[11] The word-order of the adjectives in łúsh t’sí náwəts ‘good sweet shore’ strikes me as odd. Maybe that’s just a byproduct of how unusual it sounds to call a shore ‘sweet’! As I’ve observed for years, the first rule of Chinuk Wawa Club is “Don’t talk flowery“. Would *łúsh t’sí náwəts sound any better to you?

[12] tíntin ‘bell; clock’ frankly leaves me at a loss. I reckon it was intended by the translator as ‘music’? tíntin łúsh here means not ‘the melodious songs’ but ‘the bell is good’. Along with the words discussed in the next note, the result is again more hilarious than it should be.

[13] síks híhi is a howler. I don’t know any other way to understand it than ‘friend(‘s) laughter’. It’s supposed to mean ‘the blessed’, and I’m supposed to be piously imagining folks in heaven with halos. Instead I’m snorting!

[14] t’əmánəwas is a wild way to translate the Christian idea of ‘our spirits’ (souls). The Jargon word always held onto its Indigenous semantics of ‘a spirit power; shaman(ism)’! Granted, there were no universally acknowledge Chinuk Wawa words for the Christian concept, but some did exist (e.g. p’ís and, around Kamloops, sili), and would’ve been safer choices here.

[15] t’łáp wík(-)mámuk: I’m so sorry, but I’m dissolving into hilarity about hobos again. Because Jargon t’łáp has a sense of experiencing something you’re not in control of, this sounds like a try at saying ‘get no-work, get workless; lose your job’. The only problem there is that the Negative wík isn’t normally used on nouns, because hílu ‘none’ is so much clearer.

[16] nsáyka maintains the ongoing confusion between singular ‘I’ and plural ‘we’.

[17] łúsh tíki ‘good want’ is another phrase that stumps the ear. It’s meant to reflect the English original text’s noun ‘praise’, as in adoration or love. The issue with that is that tíki is unknown as a noun in Jargon, and even as a verb it only clearly means ‘love’ if you put hayas- ‘greatly’ before it.

[18] łúsh íkta-s pátlach: I’m guessing I’m supposed to read this as a relative clause, ‘good things (that are) given’. However, that wouldn’t reflect what this Jargon phrase actually means. (It’s pretty hard to express the passive voice in this language.) Instead this sounds to me a bit nonsensical: ‘good things that give’. The best I can do with it is to imagine that it’s a ‘good things potlatch’, and again, I’m mighty skeptical that the translator wanted to evoke Indigenous concepts here! By the way, the final adverb ‘below’ is mystifying as well, but that’s a gratuitous point.

The takeaway — today’s newly discovered Chinuk Wawa song is a valuable document of the ways some Settlers spoke (i.e. not terribly fluently), and of how they used the Jargon (it was almost exclusively Settlers who ever thought to turn this language to Christian song).