A hatchet man is at the hello 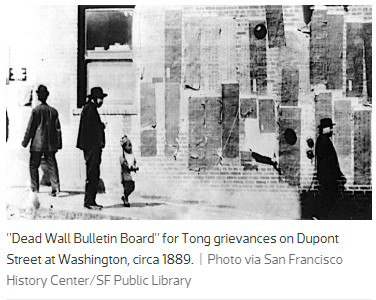 Because a cartoon is involved, brace yourself for even rougher stereotyping than the usual (sexist as well as racist), but there’s real information here about California Chinese Pidgin English.

First, the cartoon. Second, the article. Third, my comments on how this piece documents actual pidgin language use in the West.

(I’ve tried bolding everything that I think might be CPE.) 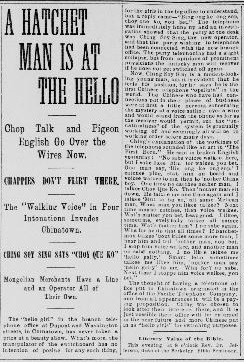 A HATCHET MAN IS AT THE HELLO

Chop Talk and Pigeon English Go Over the Wires Now.

Mongolian Merchants Have a Line and an Operator All of Their Own.

The “hello girl” in the branch telephone office at Dupont and Washington streets, in Chinatown, has never taken a prize at a beauty show. What’s more, the manipulator of the switchboard has no intention of posing for any such thing,

but is attending strictly to business. Honeyed words are not apt to flow over the circuit, nor are the wires in danger of overheating from passionate avowals of love.

When the girls in other offices find that the competing bundle of energy is no more nor less than an olive-skinned, well formed and hazel-eyed adjunct to the profession wailings will possibly outdo the irrepressible squeak, “Line busy; call again.” It has been attempted, however, to keep the identity of the operator a secret; for it is hoped that “chappies” will not discover that there is a newcomer in the telephone profession, and the company wishes it understood that all intruders upon the quietness of the operator will soon discover that tbe line is strictly “Choy Que Ko” so far as they are concerned.

The quotation looks rather unintelligible and apt to jumble on a wire, but the operator seems to know what will fit on that special line of the city’s system, and does not fear the consequences. It may be interesting to know that the operator has not as yet entered into the bonds of matrimony, but that will not change the views of the office, and those who are inclined to listen to the soft words of the newcomer will be compelled to do so in a business way.

A prettier little office could not be imagined, but business is depicted on every line of the face at the phone, and the sign on the door, “No admittance except on business,” looks just what it means — keep out. It is true there is a skilled man in the office to see that all starts off well, but the rapidity with which the operator “catches on” will soon dispense with his services.

There are thirty-four subscribers to the new system, all Chinese merchants or those of the professions. There is a hush in that district and the rapidity with which the electric messages are floating through the air has seemed to take away the desire of hatchet-men to look for prey, for all the Chinese who have telephones are anxious to try them out and the clang in the Central office is bewildering to say the least.

A first call on the wire resulted in the reply, “What’s maller him, Mut Ia Ho So?” It seemed as though some mistake had been made, but the party asked for Main 5950. Now that looked simple enough

for the girls in the big office to understand, but a reply came — “Bing ong ko ong sop, choy que ko, you bet.” The telephone was immediately hung up and an investigation showed that the party at the desk was Ching Soy Sing, the new operator, and that the party wishing to telephone had been connected with the new branch office. The party telephoning had a slight collapse, but from opinions of prominent physicians the unlucky man will recover if he does not get switched off again. 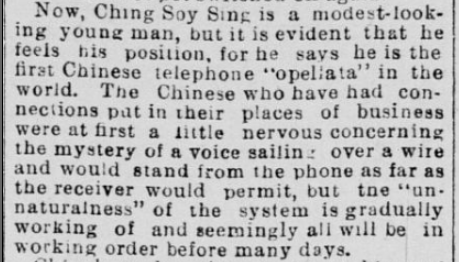 Now, Ching Soy Sing is a modest-looking young man, but it is evident that he feels his position, for he says he is the first Chinese telephone “opellata” in the world. The Chinese who have had connections put in their places of business were at first a little nervous concerning the mystery of a voice sailing over a wire and would stand from the phone as far as the receiver would permit, but the “unnaturalness” of the system is gradually working of[f] and seemingly all will be in working order before many days.

Ching’s explanation of the workings of the telephone sounded like an act in “The First Born.” He said in broken English yesterday: “No sabe voicee walkee here, but I sabe fixee him for walkee, you bet. One man say, ‘Bin ong ke ong sop.‘ I catchee plug, stab him on board and voicee walkee to me, then to ‘nother China boy. One time no catchee nother man, I talkee Choy Que Ko. Then ‘nother man sit down. He talkee me one time again and I talkee ‘Mut ia ho so,’ all same Melican man. What man you likee talkee? Next time maybe catchee, then voice walkee. Wat’s matter you bet, heap good. I likee, sometime, evelybody talkee all samee time. Wat’s matter him? I no sabe again. Wha for he do that all timee? If hatchet man talkee ’bout killee some more man, I hear him and tell ‘nother man, you bet. I stop him voice walkee, and another man no sabe nothing. I no like talkee me ‘hello gally.’ Smart fello sometimee talkee me likee him, ‘nother man say ‘hello gally’ to me. Wha for? no sabe. Next time I stoppe him voice walkee, you bet.“

The thought of having a telephone office put in Chinatown originated in the office of the Pacific Telephone Company, and from all appearances it will be a paying proposition. Ching was chosen to look after their interests there, and it is just possible their office will be enlarged in the near future and more Chinese put in as “hello girls” for switching purposes.

It would be interesting to find out which Chinese topolect (regional variety) is quoted above.

It’s already interesting that we’re given a picture of Chinese Pidgin English being spoken not just with non-Chinese, but among Chinese residents over the phone. I might wonder if the new technology was associated with “English”, just as Chinese immigrants in California, as we’ve noted on this website previously, sent telegrams to each other in CPE. (And paralleling how the new technology of writing and reading was inextricably bound up with Chinuk Wawa among Indigenous people of the Kamloops, BC region.)

The particular style of CPE quoted above matches right up with what’s known of the innovative California variety of that pidgin language. Features such as the pronoun “I” instead of “me”/”my”, the use of “heap/heep” to mean ‘very’, and so on are diagnostic. I suspect we’re seeing California neologisms here as well, relating to technological change; “voicee walkee” (a calque on a Chinese phrase, or just one of the editor’s jokes, punning on a Biblical concept?) and “stab him on board” are candidates.

One thought on “A hatchet man is at the hello”