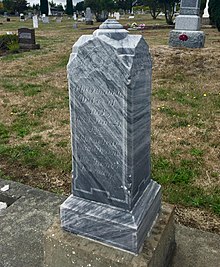 But what’s up with that “ch” sound at the start? (Represented by č.)

Chetzemoka, the man famously known as the “Duke of York” among the Whites, was born circa 1808.

Many, perhaps most, of the ships that would’ve visited S’Klallam Salish territory (on the northern side of the Olympic Peninsula and parts of Vancouver Island opposite) in the early to mid-1800s would have been British.

That’s the time period when Chetzemoka would have been given this nickname.

The British pronunciation of “Duke” would be [djuk], different from the American [duk].

And the closest thing to those King George sounds in the Native languages would be “chook” or “chookw”.

Somewhere in the process, the “k” (or “kw”) sound at the end of “Duke” got even further Nativized — it turned into a “popping k”. (That’s what the little apostrophe in the Nuuchahnulth form shows.)

So, linguistic archaeology once again brings us a neat little history lesson in one word!

← Solomon’s Sorrow: The cross-examination of Jimmy Sampson, Merritt, BC, 1911
About Jargon hymnody & prosody →