College yells in Chinook were all the rage

About the turn of the century, almost as soon as they were founded, Pacific Northwest colleges started chanting “football yells”, just as schools across the English-speaking world did.

The difference out here was that you didn’t just hear incitements to ritualized violence against the opposing team mixed with some Latin for class and faux-Indian nonsense syllables for oomph.

(Whole books have been written about settler society’s persistent equation of sporting teams with Native warriors…Football yells are just an integral part of that practice.)

At the University of British Columbia, there was a really elaborate cheer, certainly too racist (and complex) for 2018 use:

Kitsilano and Capilano are local Salish personal names. You can figure out most of the rest of UBC’s yell with a Chinook Jargon dictionary, but wah is indeterminate between Jargon wawa ʹspeakʹ (maybe meant as ʹshoutʹ) and conventional nonsense syllables.

Nearby, the University of Washington in Seattle fans were egging the Huskies on with this:

I imagine that siya here was intended both as the literal ‘far’ (running, passing the ball) and as a metaphorical exhortation ‘onward, keep at it’. Skookum is of course ‘strong, powerful’ and, as a loan into regional English, ‘excellent’. 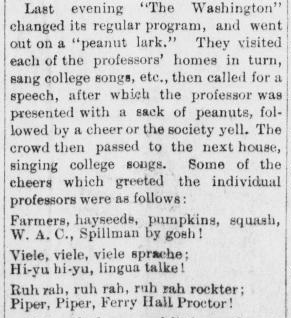 Last evening “The Washington” changed its regular program, and went out on a “peanut lark.” They visited each of the professors’ homes in turn, sang college songs, etc., then called for a speech, after which the professor was presented with a sack of peanuts, followed by a cheer or the society yell. The crowd then passed to the next house, singing college songs. Some of the cheers which greeted the individual professors were as follows:

Although the snow fell fast, all went home feeling that they had had a good time.

That middle cheer is a blend of German — since anyone studying sciences learned it in that era — meaning ‘many, many, many languages’, with Chinuk Wawa hi-yu ‘many’ and a smidgen of Latin and English.

From my memory of one of their yearbooks found at a garage sale years ago, Pullman’s “Wazzu” also had “Muck-e-i, muck-e-i, Washington-e-i!” I always wondered if that was meant to sound as Chinook Jargon-ish as it does to my ear. I think the existence of other Wawa yells confirms this to be likely!

I bet there are others in this genre. Readers, have you heard other college cheers that build in some Jargon?

One thought on “College yells in Chinook were all the rage”