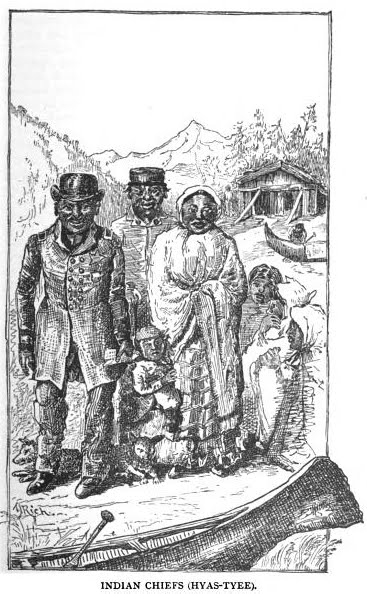 If I’m going to do a multi-part series on ‘rain’ in Chinook Jargon, I can do no better than to head to Southeast Alaska…

I found a travelogue that gets us there, with the requisite colorful anecdotes: “Our New Alaska, Or, The Seward Purchase Vindicated” by Charles Hallock and artist T.J. Richardson (Forest and Stream Publishing Company, 1886). Trivia: Hallock’s Forest & Stream magazine was acquired and merged into Field & Stream, which is still published.

I like how the authors give us more contemporary testimony about the status of Chinook Jargon dictionaries as mainstays of the Pacific Northwest tourism trade of those days. Here, they’re likely talking about T.N. Hibben’s dictionary, as we also saw in a post a few days ago:

Here in Victoria the tourist can pick up much information of Alaska, together with curios, photographs of scenery, maps of route and itineraries, not to omit a Chinook dictionary which will be useful to him at all times, and indispensable if he wishes to make the most of his opportunities to trade with the natives and learn the ways of the people; all of which he can buy cheaper for cash than up the coast. (pages 6-7)

It’s a lot of fun to find the ancestor of a hoary Northwest joke about cheechakos (I was first told it in the context of Klallam Indians of Washington):

Whenever a steamer comes to an anchor, no matter in however so sequestered a cove or fiord, a half dozen canoes appear as if by magic, where none were visible before, and surround the vessel, eager to dispose of curios to the passengers. “Sitkum tolla (half a dollar), sitkum tolla!” pipes the shrill treble of the klootchmen, using the common Chinook vernacular, as they hold up to view their baskets, mats, miniature canoes, and carved spoons made from the horn of the mountain goat. “Sitkum tolla!” chimes in the deeper voice of the stolid Siwash, who steadies the cranky craft with his paddle. And one of the smart Alecks among the passengers, who understands human nature better than Chinook, yells back: “Sixteen dollars be hanged, I’ll give you $2.50.” And so the trade is eagerly made, but the market is spoiled for the rest of the passengers, and Aleck enjoys a short lived triumph until he learns true wisdom by experience. (page 79)

Here’s one of the earlier occurrences of the Jargon word for ‘woman’ becoming truncated into an English loan:

A native will take off his own coat to wrap around the ornamental prow of his boat, which is as much as he would do for his “klootch.” (page 80)

And a discussion of Chinuk Wawa itself as one of the curiosities of Alaska (notice the authors have picked up on Pacific Northwest English of the time, where Siwash was taken as denoting males):

In the dry and sunny days of summer, when the salmon are running, and the climate is uniform perfection, the temperature scarcely varying ten degrees from sun to sun and month to month, the Siwash locks his winter cabin and takes his “klootch” and fishing outfit to some choice location where he can catch and cure a supply of fish for winter’s use; and as the natives incline to be gregarious and combine for mutual help in hauling nets and hunting, he usually has plenty of company. Very picturesque are their aggregations of canvas tents and shanties of bark and boards which skirt the shore of some landlocked cove under the shelter of some circumjacent forest and overshadowing mountain, with busy canoes plying to and fro with the seines, and the klootchmen spreading out the ruddy salmon on the adjacent rocks to dry. “Klootch,” or klootchman, is synonym for woman in the Chinook lingo, who may be wife, concubine, mistress, or actual slave, for partnership attachments are not always fixed by formulas of marriage in that lone country; and every sojourner has his “klootch” in wedlock or otherwise, who acts as constant housekeeper or handmaiden. In the same vernacular her liege is known as “Siwash,” which is a corruption of the French word sauvage, and is applied to the male sex generally.

A queer jargon is this Chinook. Once upon a time, when very many nations were represented by a very few people in that vast region dominated by the fur companies, embracing Oregon and Washington Territories and all the country lying to the northward (the French perhaps being numerically the strongest), a sort of congress of national representatives formulated this universal language to facilitate intercourse. The words in most common use were adopted, a few of them purely native dialect, but a very large proportion bastard French. The remainder are simply phonetic, expressing, when pronounced, the ideas conveyed by the sounds; for instance, amusement is “he-he,” rain “patter-chuck,” a crow “caw-caw,” a cough “hoh-hoh,” the heart “tum-tum,” a handkerchief “hak-at-chum,” etc. There are about five hundred and fifty words in all, and with this limited vocabulary and the use of signs, a man can travel the whole North-west over from Central Montana to Bering Sea. In fact, Chinook has almost superseded the native dialects, of which there are no less than ten upon the coast, and perhaps as many more in the interior. The different tribes seldom attempt to converse in each other’s language. There are a few words in which the letter “l” is substituted for “r,” Chinese fashion, indicating possibly an ancient Asiatic connection; for most of such words are appropriated from the native tongues, a fact which no doubt must be gratifying to those who claim to be able to prove that the Chinese were the earliest discoverers of America.

In the early days when the monotony of isolation was varied by reprisals among the tribes, slaves were habitually made by the victors, and I have heard it stated by white men who claim to have been residents at the time, and cognizant of the circumstances, that the Shimpshean Indians, near Dixon Channel, used to kill and eat certain parts of their prisoners, taking bites from the fleshy portions of the arm and breast and thigh to give them courage “skookum tum-tum.” (pages 81-82)

Amusing that the author seems to hear hak-at-chum as the sound of sneezing into a handkerchief! The general opinion is that the word came from English.

We should expect the above Jargon to be mostly based on a published source like T.N. Hibben, but at least one item looks new to my eyes. Wouldn’t you know, it’s ‘rain’! This patter-chuck I suppose is a phrase (páɬ tsə́qw, ‘full of water’; páɬ often being used to convey ‘a lot of’) that the authors actually picked up from local experience, which supports their stance that you’ve got to learn some Jargon to deal with local conditions. When I check the Hibben that I think they used, I just find the expected < snass > for ‘rain’; the same dictionary does give the same expression that I see here, but its < pahtl chuck > is glossed as ‘wet’.