“In the future, everyone will ride this kind of horse”

*Scroll to the bottom for my Mother’s Day note 🙂

Talk about steampunk!  The guy was a straight-up 1890s geek:

Father Le Jeune of the Kamloops Wawa showed his fancy for technology in many a way.  One was early adoption of the Edison mimeograph and a related device called the hektograph, to self-publish his Chinook Jargon newspaper.

“Parisa” also got a typewriter as soon as he could, at a time when writing on one was a high-tech specialized occupation.  Many of you will not have known that the last decade or so of Kamloops Wawa was typewritten–in English and French–and then mimeographed.

We can go on: Le Jeune delighted in gathering Aboriginal people from hundreds of miles around and regaling them with magic-lantern (slide-projector) shows, accompanied by his own and any visiting priests’ narration.  He reported with detectable enthusiasm about the installation of acetylene lights at an establishment across the river in Kamloops.  He went into great detail about the workings of metal-framed skyscrapers in Chicago, the burgeoning city of his era.

It’s in that spirit of embracing new technologies, combined with an obvious eagerness to see what further changes the future would bring (and not a little of Le Jeune’s trademark humor), that I’m sharing today how he introduces his readers to those newfangled two-wheelers… 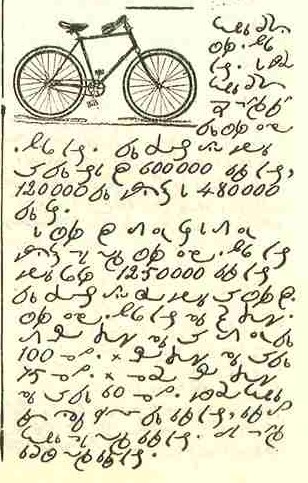 kopa ukuk aias
on this very

kopa Boston ilihi pus klaska sil ukuk wam.
in the USA to be sold this summer.

kwash chako kakshit kopa kakwa kyutan, kakwa ilo
are afraid of getting hit by this kind of horse, so

Today’s post is in honour of my mom Ann, who has always set me the great double example of an optimistic attitude and the enjoyment of a healthy active life — and in honour of my grandma Bonnie, whose anecdote of her grandma being startled and hurt by a newfangled automobile stays with me as part of our family lore.

Happy Mother’s Day to all of you!

← Otters
Silver bells we can do, but cockle shells? →