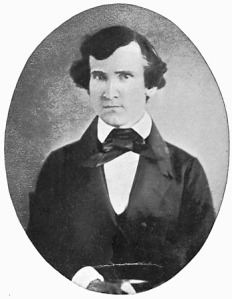 J.K. Townsend.  1839.  Narrative of a journey across the Rocky Mountains, to the Columbia River…  Philadelphia: Henry Perkins. 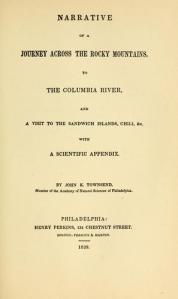 At least in the Chinook Jargon world, this book by an influential naturalist is an overlooked prize among early travelogues.  This voyage in the company of Nathaniel Wyeth and Rev. Jason Lee, among others, took place in 1834 and 1835.

Among its many engrossing points, it’s a neat document of Jargon as used in the early, less stable or crystallized period of its existence.  (Cf. Samuel V. Johnson’s 1978 dissertation, pointing out that era based on the evidence of the recorded vocabularies of CJ.)

Page 248: “the racine blanc [sic] of the Canadians” found near present-day Boise, ID, is biscuitroot, otherwise often known as cous/kouse.  I wonder if the French Canadian fur-trade employees Townsend was spending time with really unconventionally used the masculine adjective here?  Is that a Metis thing?  Google informs me that racine blanche (‘white root’) is the parsnip.  It’s always nice, anyhow, to get an indication of the actual use of folksy French words that wound up in CJ, where some sources have ~ lalasin for ‘root, roots’ (generic).

Page 300: “islanders–or Kanakas, as they are called” are noted as hardworking sailors.  Twelve, however, who accompany Captain Wyeth towards Fort Hall inland, desert him each on a horse.  Wappatoo Island is the largest in the vicinity.

Page 303: worth mentioning is the conversation Townsend has with a remarkably acculturated nearby Klikatat (Klickitat Sahaptian) chief who already speaks English.  I find the range of tribes that practice head-flattening, which this chief speaks agains in his tribe, pretty enlightening.  Considering that this practice has been so strongly associated with the Chinooks, this multiethnic list may surprise some:  Klickitats, Kalapuyas, Multnomahs, Chinooks, Clatsops, Clatskanies, Cowlitz, Cathlamets, Tillamooks, and Chehalis.

Page 306: “Indian rum“, two-thirds water and one-third rum: could this have been a CJ term as well?  (Perhaps ‘sawash lam‘?)

Page 307: the “short petticoat made of strands of pine bark or twisted hempen strings, tied around the loins like a marro” [? I haven’t found a definition of that word–DDR], worn by Chinook women, is called a kalaquarté.  A disease that must be the “cole sick waum sick” [known in other sources] is prevalent in the area, killing lots of Indians but none of the whites who come down with it.  Malaria?  Smallpox?

Page 309: George, a Kowalitsk (Cowlitz) Indian bearing a letter of recommendation [or skookum paper] from the HBC’s Captain McNeall, is engaged as a river pilot.  He indicates the desired landing place with CJ “ookook“, glossed in this book as “here” [usually ‘this/that/these/those’ in later CJ].  The burial place called Mount Coffin is described as if it were a promontory; so is this different from Memaloose Illahee/Memaloose Island?  (You can camp near it at Memaloose State Park, OR, if that’s your bag.)

Page 322: Chinook Indians’ shamanistic curing is ” ‘making medicine‘, to use their own term”–i.e. in CJ?

Page 334: Townsend also keeps company in the Oregon country with Dr. Gairdner and Thomas Nuttall, both of whom did important botanical and zoological work out here, and Reverend Samuel Parker, who later published his own Pacific Northwest narrative and early CJ document, Journal of an exploring tour beyond the Rocky Mountains….

Page 337: At or near Fort Vancouver, Townsend hosts an 80-year-old Native man, Maniquon, and has substantial conversation with him “in his own language”, therefore surely meaning Chinook Jargon. 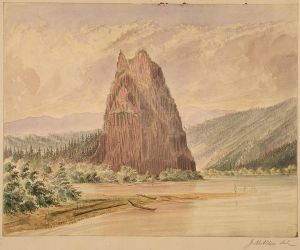 McLeod’s Castle or Castle Rock, at the Cascades of the Columbia River. Painted by James Madison Alden, 1857-1862.

Page 339: the tum-water is “the cascades” of the Columbia.

Page 341: some Chinook Jargon phrases and sentences.  March 1st, 1835: a short local Native man, Qualâskin (said to mean ‘muddy river’), is considered a busybody around Fort Vancouver.  He calls himself a tanas tie, glossed as “little chief” here.  He’s curious to know the English name of everything, always asking “ikata ookook? — ikata ookook?“, here translated as “what is this? — what is this?”, and “kahtah pasiooks yahhalle?“, here liberally “what is its English name?”  This latter is interesting, showing that at the time, nem / nim for ‘name’ wasn’t yet current, and that pasiooks must have meant generally ‘white people’; later CJ restricts it to ‘French [Canadian]’.  When Qualâskin is asked his own pasiooks yahhalle, he replies “mizzy moddy“–which looks like a Chinookan pronunciation of ‘busybody’.  Incidentally, Dr. William Fraser Tolmie is another later-to-be-well-remembered figure whom Townsend meets.  (Tolmie lived at Ft. Vancouver till 1841 and was superintendent of the Puget Sound Agricultural Company at Fort Nisqually from 1843-1859.)

Page 347: upstream from Ft. Vancouver in what seems Chinookan country, the “constant cry” of Native people as Townsend’s party approaches their villages is “pi-pi, pi-pi“, glossed as “tobacco, tobacco”.  Is this a native term or could it be from French “pipe”? 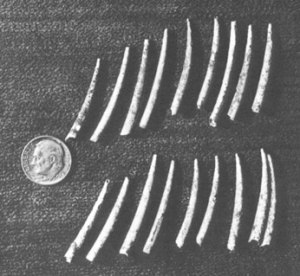 Page 360: a local Native leader, likely to be the successor to the late chief Tilki, is known by the CJ name Skookoom, “the strong”, largely for his feats of pain endurance.

Page 361: a locality near The Dalles is known as the Prairie de Thé (tea prairie)…hmm…why?

Page 364: another CJ sentence: “iskam kahmooks, iskam kahmooks, kalak’alah tie chahko“–translated here as “take up your dogs, take up your dogs, the bird chief is coming”.  This is the warning called out in the Indian village at Chinook [I presume modern Chinook, WA] after ornithologist Townsend (known by a CJ name kalak’alah tie) threatens to shoot any of the numerous local hounds that may threaten him.  (Not mentioned here but instantly springing to mind is botanical collector David Douglas’ 1820s Native-bestowed name, presumably also CJ, “Grass Man” or “Grass Chief“–perhaps Tipso Man or Tipso Tyee.)

One thought on “Townsend’s narrative: Bird Chief and the Indian dogs”