Looking through an antiquarian bookseller’s website, I spied a neat-sounding book that was new to me. 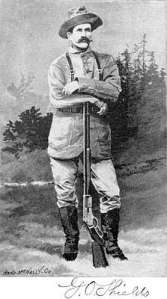 They wanted a shocking price, but Google Books had it as a free ebook 🙂 Turns out to be quite a good read: a travel narrative titled

A narrative of travel, exploration, amateur photography, hunting and fishing, with special chapters on hunting the grizzly bear, the buffalo, elk

by George O. Shields, published by Rand McNally & Co. in 1889. George spent time in 1887 around Chehalis–the Canadian Chehalis on the lower Fraser River–and elsewhere in Stó:lō Salish country.  He brought and used a “detective camera”.  He apparently was from Chicago.  Oh, and this book is like so old school that he keeps talking about “Mount Tacoma”, lol.  Plus he keeps writing “cañon” instead of canyon or whatever.

Reference is made to Indian dominance of the labor market for hop picking around Puget Sound; they come from near and far.  “[T]he good Lord sends the tyee (great) salmon to your very door….”  Passage is taken from Seattle to Victoria, thence across to New Westminster on the “Frazer” River.  Strong anti-American prejudice is met with from business owners.

Shields is recommended to engage and is introduced to Douglass Bill, a highly regarded Native hunting guide who lives on Douglass (Douglas) Lake and speaks fair English.  Scant sympathy is expressed for the three days’ delay caused by the death and funeral rites of a “kloochman”, Bill’s mother-in-law, on the “Chilukweyuk” (Chilliwack) River (page 57).  This word is glossed as “the Chinook word for squaw” (pages 61-62).

A Chinook Jargon conversation between trading post owner Mr. J. Barker (the only non-Native locally) and “Mary” at the village of Harrison River/”Skowlitz” (Scowlitz) is reported (page 62): “Mary, yah-kwa Boston man tik-eh moo-sum me-si-ka house po-lak-le.”  (Here is an American who would like to sleep in your house to-night.)[“]  To which she replied:
“Yak-ka hy-ak” (he can come),[“] and the bargain was closed.

There are elements of this and other CJ in “Cruising the Cascades” that forensically suggest they were written from memory and that author Shields was not very fluent, just as he claims in the book.  Later in this post you’ll see my reaction to his recording of pidgin English.  Before we move on, though, I want to point out the use of “moosum” (sleep) here–compare yesterday’s post in this blog!

The generic Aboriginal person, that is Shields’s appeal to a stereotype, is referred to by the name Lo (page 63).  This is a conventional insult; at least I’ve not seen it used favorably yet.  It traces back to a well-known 1734 poem “Essay on Man”, where Alexander Pope had originally portrayed Indians more or less as noble savages to be admired in many respects: “Lo, the poor Indian! whose untutor’d mind / Sees God in clouds, or hears him in the wind…”

Shields repeatedly shows he has a horror of getting lice from Native people.  He ignores his host’s properly solicitous offer, “hy-iu mit-lite pa-se-se” (“plenty of covering on the bed”) and uses his own blankets.  (Page 63.)  The house sounds much like any white Canadian’s dwelling.

This page has one of the earliest occurrences I’ve seen, incidentally, of the phrase “sleeping bag”.  Shields shows a diagram and describes its construction on page 110, if any of my fellow outdoors lovers are curious.

I wonder if Mary could be the “Mary Morgan” associated with Chehalis in the pages of the Kamloops Wawa Chinook Jargon newspaper in the 1890s.  Mary’s husband is George, not to be confused with the George mentioned below.

Shields is to meet Douglass Bill at Harrison Lake, where a hotsprings resort has recently been built.  He travels with a Native-operated freight canoe up the Harrison River, giving (page 67) a vivid description of the Indians’ numerous hogs feasting on the masses of dead salmon on the shoreline.  He happens to use the phrase “every stick of driftwood”, which I’ve mentioned previously in connection with the history of CJ “stick”.

One of the freight canoeists, Charlie, comments on Shields’s shot at a goose in “broken, laconic English” (pidgin English?): “Dat no good goose gun.  Shoot him too much away.”  (Page 69.)  On page 71, he jocularly explains that the jumping of salmon isn’t in alarm: “No…Play.  All same drunk–raise hell!”

The generic local Native person at Chehalis is referred to as “the Siwash” (page 85).  At this locale Shields is introduced (page 86) to a fiftyish guide named Pean–perhaps a Stó:lō pronunciation of Pierre?  That was a very common Christian name in the region, due to the activity of French-speaking Oblate Catholic missionaries.  Pean claims he can speak English, but is found to rely on “Chinook” and pidgin English (page 87). Shields asks another old Indian whether he can “wah-wah King George” (speak English), and he replies “Yes.”  In response to further questions, he too speaks what may be pidgin English: “Oh, yes…me chief here.  All dese house my house.  All dese people my people.  No other chief here.”  On being asked his name: “Captain George…me chief here.”  [This is probably the “Captain George”/”Chief George” of Skwa/Chilliwack/Chehalis whom Father J.M.R. Le Jeune later remembered in his Kamloops Wawa as hospitable and supportive upon his 1881 first missionary assignment (and as being literate after 1891 in shorthand “Chinook writing”).]  On whether Pean is a good hunter: “Yes, Pean good hunter; good man.  He kill plenty sheep, deer, bear.”

On page 89, Shields glosses “Siwash” as “coast Indian”.  He also says most of the “Puget Sound Indians” are of the “Flathead Nation”, another term in notoriously imprecise use at the time.  The word “cayuse” for an Indian horse is used but in reference to Plains people.

Native canoes and seamanship are admired (pages 90-92), as is the industriousness of “some” of them in canneries, canoe freighting, packing, lumbering and logging.  Passivity is stereotypically attributed to them; one of Shields’s guides, asked why he doesn’t use long-lasting rubber shoes in this climate, says in pidgin-like English, “O, I dunno.  De moxicans [moccasins] cheaper, mebbe.  I mek him myself.  Can’t mek de boots.”  (This is remarkably similar in structure to how one would express it in CJ or a Salish language.  From the internal evidence, I’d judge that Shields was recording pidgin English a bit more accurately than CJ.)  Buckskin is not much valued for clothing; traditional weaving of mountain goat wool is on the decline (page 94).  Indians are “strictly honest, toward each other at least.”

A Native man’s pidgin-like English is quoted: “I had plenty hooks, but I reckon Seemo he steal all my hooks.”  (Shields understands Seemo as “Seymour”, which is to this day a characteristic surname in Native communities, but I’m interested that this is also identical to “Simo” from the French pronunciation of “Simon”, bestowed by many Oblate missionaries among the BC Salish.)  “You bet.  He steal my hooks, too.”  (Pages 94-95.)

Local Native men tend to use highly prized old Hudsons Bay Company muskets, keeping them in cases made from locally killed seals’ skins, but they rarely if ever oil the guns (page 99).  Shields’ Winchester is a curiosity: “I didn’t know Winchester so big like dat.  Didn’t know he had stock like dat.“

Shields returns (page 100) to Pean’s linguistic repertoire and his own, as so many of these old narratives are wont to do: Pean is a far more fluent speaker than Shields of Chinook Jargon, and enjoys talking.  Shields has to use a commercially printed dictionary to try keeping up with his verbiage, cutting Pean off repeatedly with “Halo kumtucks” (I don’t understand).  As in many other aspects of his encounter with Pacific Northwest Native people, Shields shows a lot of respect for them here; the stereotypes he invokes in the book come across almost as obligatory formulations to hold the attention of a non-Native reading public.

Shields goes on at greater length about Chinook Jargon in Chapter XII (pages 102-103).  The old saw that the HBC invented Chinook Jargon is repeated, as is the claim that it contains Spanish words.  Greater powers of observation are seen in the specification that CJ contains “English, or rather pigeon-English [sic], words” and that Indians, whites and Chinese all learn it rapidly (page 102).  It’s said to have 1,500 words, an optimistic estimate in my view of most CJ dialects. Examples are provided: “Kah-tah si-ah ko-pa Frazer chuck?” (How far is it to the Frazer River?–page 102.)  Yutes kut klat-a-wa la-pe-a” (Only a short walk–pages 102-103.)  Several more cover familiar themes of hailing Indians and negotiating pay for their labour, and I imagine one could track down which dictionary Shields was using by comparing several with this material:

The local people’s language, Stó:lō Salish (Halq’eméylem), is described in the usual uncomprehending fashion as a fantastic mix of sputters and grunts (pages 114 on onward).  Usual too is the accusation that one of the guides, Seymour, knew English perfectly well but refused to speak it.

A further destination is Ski-ik-kul (Chehalis Creek) and Ski-ik-kul Lake (Willey’s Lake, its source) (pages 120ff).  There, Seymour leaves the party behind, and John says (page 121) “He try spear salmon.”  “What will he spear him with?” asks Shields, echoing or anticipating pidgin English grammar; “Sharp stick?”  “No.  He bring spear in him pocket.”  The construction of this implement, actually detachable barbed heads and cord, is a fascinating mix of traditional and modern materials, needing only a cedar pole to be lashed onto.  Once salmon are cooked, Shields asks if he can cut off a piece to eat; John replies, “Yes.  Cut off how much you can eat.”

More pidgin-like speech is in this conversation about John’s command of English: (Shields:) “Your language doesn’t seem to have as many words as ours.” [sic!]

(John:) “No; English too much.  Make awful tired learn him.”

“Where did you learn it?”

“O, I work in pack train for Hudson Bay one year, and work on boat one year.”

“Where did the boat run?”

“She run nort from Victoria.”

“What river?  What was the name of the town?”

Climbing a steep mountain trail, all three men take a tumble, and “groans, shouts, and imprecations, in English, Chinook, and Scowlitz, rent the air.”  (Page 133.)

On the following page is more conversation: “He say put him on stick by fire to cook in de night.  Then he go to sleep and stick burn off.  Grouse fall in de fire and burn.”

“That’s too thin.”  [Wonderful antique slang! — DDR]  “Seymour cooked that grouse and ate it whlie you and I were asleep.”

“I like him all time…I never git without butta for brade at home.”

On the homeward trip, Shields stops off in Spokane Falls, Washington Territory (present-day Spokane) and takes a hunting trip to Mount Carleton (Mt. Spokane) and northward on the Colville road (Chapter XIX).  Further chapters padding out the book nerdily (as we would say today) revel in the manly details of hunting individual big-game species: grizzly, elk and antelope, buffalo and mountain goat, as well as of trout fishing and deer.  Varied reminiscences and ruminations on “the cowboy life” (with lots of yet-unassimilated Spanish words) round things off.

One thought on “Cruisings in the Cascades”