Associated with long-ago football seasons at Washington State College, which is now “Wazzu” (WSU) in Pullman, I find fan cheers and songs that look, well, kind of Chinooky.

That association is reinforced by the title of the college’s yearbook, the “Chinook”. 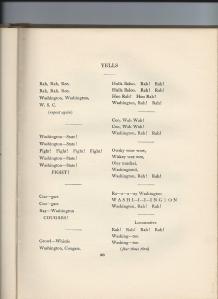 Are these faux Chinook for Indian war-whoop effect, faux Latin, or both?  I see Chinookiness in that “muckei”, similar to CJ “muckamuck” (eat)…with an image like “eat ’em alive, Washington!”

Strengthening the “both” argument, I find a highly similar “Our Cheer” elsewhere in Jargon country, at the University of Oregon in 1920.  (In The Phi Gamma Delta, volume 42, issue 5, page 685.)  It runs,

(Spellings are reproduced faithfully.  This cheer also appears in the 1927 Just Yells: A Guide for Cheerleaders by George M. York and Harry Hammer Clark, published by the Willis N. Bugbee Company.  A nearly identical 1918 version is found in The Rainbow of the Delta Tau Delta, volume 41, referencing “Washingtoniai”.)

A second Oregon spotting is in the Rogue Digger*, published by the Rogue Valley Genealogical Society.  Somewhere in volumes 35-37 and from an unspecified past time (sorry, this one’s from Google Books and doesn’t get more specific), I notice:

*(Surely not  a racist reference? In southern Oregon and northern California, “digger” was an old anti-Indian slur.)

In the same era but further south and just out of the historic Chinook Jargon region, the Berkeley Daily Gazette  of February 29 and March 1, 1924 ran an illustrated advertisement for the University Hill residential subdivision headlined, “Oski! Wow! Wow!” and including the admonishment, “You ‘Profs take a look at these. You can throw a stone inside the stadium from either one of them,” going on:

This doesn’t destroy the case for a Jargon tie-in.  But I’ll have to finish with a sighting that tips things heavily in the faux-Latin direction.  The Boston Daily Globe‘s Sunday Magazine of April 16, 1911 reports about the University of Maine [I think]:

Whisky wee-wee: Holy mucky-eye! [indecipherable]hooopeeee.
This is Yelled with throttles wide open and winds up in a whoop ad libitum.

While the Jargon theory gets weakened by this, that ‘whooping’ at least reinforces a guess that we’re looking at Indian or tribal yelling by football fans.  I can testify that in the mid-1980s, the Columbia University marching band’s repertoire of traditional yells included one that I always heard as faux-Pacific Islander or -African.  (With words like “watungga hey”.)

And it’s interesting that the only other occurrences of “muckei” cheers are in the greater Pacific Northwest.  Maybe this cheer was taken up with special enthusiasm out here because it sounded like CJ?  Maybe it even originated here and was taken up by Maine?  That’s not out of the question.  The earliest cite I’ve got is in the Delta Upsilon Quarterly, 1907, referencing U. Cal. Berkeley. (And that’s corroborated by a mention in Portland, Oregon writer Beverly Cleary’s memoir My Own Two Feet.)

But I’d say the jury’s out.  Anyone have more evidence?