We now know of a total of 4 letters in Chinuk Wawa written by William “Willie” McCluskey of the Swinomish Indian Reservation in northwestern Washington State.

In previous years I’ve published the two that we then knew of. Today I’ll show one of the two newly discovered thanks to the help of my reader (and professional researcher) Alex Code.

Like always, I’ll do a deep dive into the Chinook of this, after letting you read the source newspaper article for yourself. 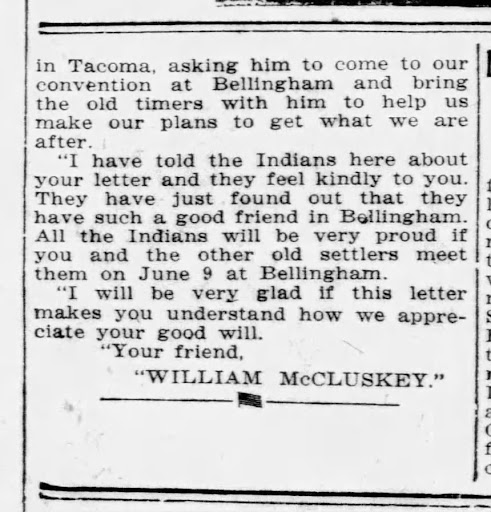 Hugh Eldridge postmaster, is in receipt of a letter written in Chinook by William McCluskey, of LaConner, commending him for interest shown in behalf of the Indians in their coming convention to be held in Bellingham, June 9.

“I saw in the Bellingham Herald your letter to the white chief Ed Benn in Tacoma, asking him to come to our convention at Bellingham and bring the old timers with him to help us make our plans to get what we are after.

“I have told the Indians here about your letter and they feel kindly to you. They have just found out that they have such a good friend in Bellingham. All the Indians will be very proud if you and the other old settlers meet them on June 9 at Bellingham.

“I will be very glad if this letter makes you understand how we appreciate your good will.

“HUGH HIYU TILLICUM” is average Settler Chinook for the post-frontier era. It’s out of practice. The literal meaning is ‘Hugh is a lot of people’, or ‘Hugh is a lot of friends’! Surely that wasn’t what was intended. Pacific Northwest Settlers took “hiyu” into their English, using it often in a new meaning ‘big’ due to confusion with another Jargon word, “hyas”. In today’s headline you see Settlers doing this Anglophone-literacy-influenced thing of further stretching the meaning of “hiyu” to the metaphorical ‘great’. (My sense of actual fluent Chinook Jargon is that folks instead said “kloshe tillicum“, a ‘good friend’, just as McCluskey does at the start of his letter.)

The word “klosha” in the sub-headline is a typesetter’s misspelling of “kloshe”, i.e. ‘well; good’.

Now for the letter, with my own interpretive information put up against the newspaper’s supplied translation; “DDR” indicates my own translation.

copa Paypa, pe klaska Oh! delate massee tumtum [7] copa mika. Chee klaska kumtux mitlite ikt
kʰupa pípa, pi ɬaska, ó!, dlét mási-tə́mtəm kʰupa mayka. chxí ɬaska kə́mtəks míɬayt íxt
in paper, and they, oh!, really thanks-heart to you. newly they know exist one
‘in the paper, and they, oh, they were really thankful to you. They’re finding out just now that there’s a certain’
‘feel kindly to you. They have just found out that they have such a good friend in Bellingham.’

Comments:
There’s a number of typical Northern dialect features in today’s reading that I feel I’ve already harped on enough in previous posts.
Here’s some other stuff:

…iktah mika delate klosh wawa…, pe spose [2] yaka mamook kumtux…: This right here is a little bit tricky to interpret. I don’t feel it’s the kind of thing we’d spontaneously say out loud in a Chinuk Wawa conversation. ‘…what you really said well, and (said) for him to inform…’ That’s just weird. Don’t try it at home. This particular part of the letter is evidence that Mr. McCluskey was familiar with letter-writing, and knew that letters (in English) use a different style of language from informal talk.

A related expression is copa yahkwa [5] , literally ‘at here’. This is another common northern-dialect expression, meaning generally ‘over here’.

Just plain Swinomish [6] is used here to mean ‘at Swinomish’. It’s a perfectly fluent example of Chinuk Wawa’s option to leave out preposition. More accurate is to say that you can leave out the generic preposition kopa. The few other prepositions, having more specific meanings (e.g. konamoxt ‘(together) with’), can’t easily be left out when you speak Jargon.

Somehow massee tumtum [7] evokes the Indian Shaker Church for me. That organization has a pretty strong historical presence around Puget Sound, including the Bellingham area. At any rate, it’s not a terribly common expression, and I believe I’ve only found it in the northern dialect of the Jargon.

The expression Boston-man copa illahe(,) delate tyee, [8] klosh tumtum… works best for me when I understand it as a noun phrase (‘American man in this place’) followed by two relative clauses (‘who is a real chief’ and ‘who is good-hearted’). Your mileage may vary.

Notice how McCluskey doesn’t bother expressing an acculturated calendar date (“June 9”) in Jargon. Instead, [9], he uses the common expression okok sun ‘(on) that day’ (in time-of-occurrence expressions, Chinuk Wawa often uses no preposition kopa). He specifies further with a plain relative clause, konaway tillicum mitlite ‘that everyone is here’. All of you who have been discussing the oddly hard task of expressing ‘when’ in northern CW, take note — here’s one more way, albeit a rare way, to do that.

Another phrase that obviously reflects Mr. McCluskey’s acquaintance with Settler letter-writing customs is spose okok nika paypa klap [10] mika delate skookum pe youlth tumtum: ‘if this letter of mine finds you really healthy and in good spirits’. There are a couple-three problems with that, from the standpoint of normal spoken Chinuk Wawa. (A) Inanimate things like letters don’t “find” people in CW, even though letters in English often phrase stuff that way. (B) We might charitably interpret klap in its other known sense of ‘to reach (a place)’, but that expression, too, needs a subject that acts more or less under its own volition/power (e.g. a person, a horse, an automobile). (C) The Jargon has no equivalent for the English idiom ‘find O Adj’, where O = the direct object and Adj = a predicate adjective being used in a more adverb-like sense, ‘in a state of Adj’.

My takeaway from this letter of Willie McCluskey’s is that it’s a treasure, it’s good Jargon, but it has features I wouldn’t advise anyone ever to imitate.

The majority of old letters in Chinook Jargon, many dozens of them, differ from today’s in that they just write as people spoke. And they’re easier to understand because of that. My vote is for us to avoid being influenced by foreign styles when expressing ourselves in CJ.

(That said, I’m looking forward to “Chinook Haiku” day in one of our next Saturday morning Snass Sessions. Contact me if you want to join that Zoom meeting!)