One of these days, and it won’t be long, I’m going to do a public reading drawing from the copious Northwest folk poetry we keep digging up here…

…I’ll just need to figure out some appropriate disclaimers for how insensitive a lot of it is.

(Which is ironic, for poetry.)

Anyhow, I really wanted to present this one to you because it brings at least one legitimate new discovery for most of you Jargon students. 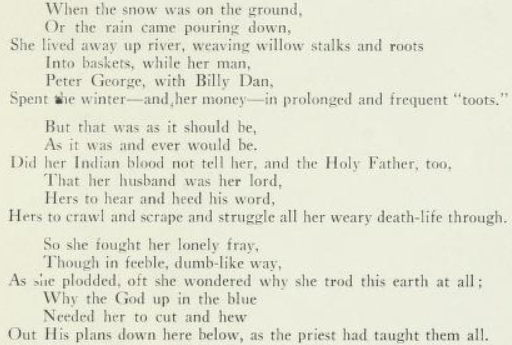 “Mika tiky basket?” [1]
Her face was like a mask ; it
Was so blank as she squatted on the back verandah floor.
She was Peter George’s “klootch” [2];
Toiled while he filled up on hootch [3];
Bartered basketwork to keep the hunger wolf outside the door.

Before the “sockeye” run
Every spring she came to town,
With the fruits of her labor through the winter on her back.
Trudged about from place to place,
Her old wizened, shrivelled face
Showing just as much expression as her big unwieldy pack.

When the snow was on the ground.
Or the rain came pouring down,
She lived away up river, weaving willow stalks and roots
Into baskets, while her man,
Peter George, with Billy Dan,
Spent the winter — and, her money — in prolonged and frequent “toots.”

But that was as it should be.
As it was and ever would be.
Did her Indian blood not tell her, and the Holy Father, too,
That her husband was her lord,
Hers to hear and heed his word,
Hers to crawl and scrape and struggle all her weary death-life through.

So she fought her lonely fray,
Though in feeble, dumb-like way.
As one plodded, oft she wondered why she trod this earth at all;
Why the God up in the blue
Needed her to cut and hew
Out His plans down here below, as the priest had taught them all.

But there came a spring one year,
And the fishing time drew near.
When old Peter had no money and he cooked his meals alone.
“Nika klootchman? [4] Oh, she die;
Not much good. Guess by’-m-by [5],
Catche [6] ‘nother ‘skookum klootchman,’ [7] take up river to my home.”

Ever thus it is. The woman
Lives her life, takes up her room and
Dies to let another labor where she’s toiled long years away;
While the man looks on and takes her
Love, her labor. Dead, forsakes her
Mem’ry for a living toiler who will last him through life’s day.

“Mika tiky basket?“ [1] ‘Do you want a basket?’ would be recognized by readers as a common sales pitch of Native people who sold their wares on the streets of Pacific Northwest cities. Take note, “basket” is known as a Chinuk Wawa word in BC, from Kamloops to the coast.

“klootch“ [2] ‘(Native) woman’ is technically more an English word than a Jargon one. It was invented by English speakers, who shortened Chinook Jargon “klootchman“, and we find it almost exclusively used in local English.

hootch [3] ‘hard alcohol’, shortened — also by English speakers — from the Lingít (Tlingit) village name Xóotsnoowú ‘Grizzly-Bear’s Fort’ (now Angoon on maps), was a new and popular word in Pacific NW English. It’s likely to have been heard in Chinuk Wawa sometimes, but mostly from White folks; there were already plenty of established words for hard liquor in CW, such as lám, (x)wíski, páya-wáta, etc.

by’-m-by [5], a classic Pacific Pidgin English word, appears in a few Chinook Jargon word lists from the 1800s. Here it could be taken either as English or as CJ.

Catche [6], possibly a misprint for < catchem >, seems to be another Pacific Pidgin English / Chinese Pidgin English-style word. It’s known definitely as < katshim > in Chinook Jargon up at Kamloops and possibly elsewhere in BC.

‘skookum klootchman,’ [7] ‘strong woman’ — or to the ears of local English speakers whose dialect included both words as Jargon loans that had shifted in meaning, ‘excellent Indian woman’.

All in all, classic regional doggerel from the early post-frontier era.