Catherine Isaac’s letter from Langley, BC 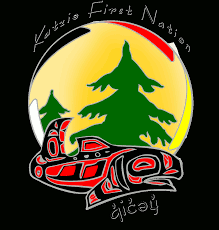 An Indigenous woman writes with news and a special request…

I infer that Catherine Isaac may have been of Stó:lô background, maybe specifically Katzie or Kwantlen. Those are First Nations in the Langley, BC area. Besides, she makes plenty of use of a couple of Coast Salish words that were known, but perhaps less frequent, in Kamloops Chinuk Wawa.

It’s possible her interest in writing Chinuk Pipa was abetted by Father Edmond Peytavin, “the Stó:lô priest” who promoted this literacy on the lower Fraser River.

Here are her words. I’ll hold comments for afterwards, addressing some points raised by ‘the Saturday Group’ of Jargon learners who I recently mentioned.

Náyka kwánsəm [1] sík ‘I’m still sick’ — this is one of the non-literal uses of kwánsəm, which normally means ‘always’. For another, see note [5].

máyka skúkum [2]: here is a non-literal but quite common use of skúkum, which normally means ‘strong’.

For ‘fifty cents’, speakers normally said sítkum-tála [3] (‘half-dollar’), which was also the usual thing to say in English at the time. Even though you could say ‘fifty’ in Jargon in a way that everyone would understand, in real life it was rare to verbally express a number bigger than ’10’ in Chinuk Wawa. Even saying ‘ten cents’ was rare, if you think about it…CW has a special word for that quantity, can you remember what it is?

For a nice example of Chinook Jargon’s love of compound nouns, check out úkuk (t)ɬús(h)-syə́tsəm [4] Kémlups Wáwa pipa (‘this good-news Kamloops Wawa paper’)! This word syə́tsəm came from Coast Salish, I believe specifically a Canadian Lower Mainland language like Squamish. The Oblate missionaries started from the coast and worked their way gradually up the Fraser River to the inland tribes, such as those around Kamloops.

St’íwiʔəɬ-tílikəm[6](‘praying-people’) was a standard expression in BC Chinuk Wawa for ‘Christians’. Note that anqati is put before this phrase to specify ‘the long-ago Christians, the original Christians’.

…míməlus pus [7] Shisyu-Krí yaka st’íwiʔəł ‘die for Jesus Christ’s religion…’ has an unusual use of pus for BC Jargon, where that word normally meant ‘if; when; in order to’ but not this use as ‘for something’.

While we’re looking at that sentence, take note, st’íwiʔəł [8] (literally ‘prayer’) is the usual word for ‘religion’ in Kamloops Jargon.

Twénti* [9] Djénweri is another instance of the rarity of higher numbers in Chinuk Wawa; here, the spoken English word is more normal to use.

…yaka t’łáp pi [10] yáka míməlus: it’s quite common in BC Jargon for pi (literally ‘and; or’) to be used as a connector giving the sense of ‘when’ some consequence happened.

Yaka píktyur [12](‘its picture’) is the usual way of saying ‘a picture of it’. This is a little different from how my readers’ main language, English, works, isn’t it? We say ‘I took her picture’ but we don’t typically say ‘I took its picture’.

← hayáaas, kʰə́əəltəs, íiinatay, & Webster on a bridge: Of new languages there are many
Interesting argument — I know Salish as well as any White man, so no big deal that the 1855 treaty was made via Chinuk Wawa →

One thought on “Catherine Isaac’s letter from Langley, BC”