Introduced very early (Kamloops Wawa issue #13, in 1892), the “Indian Calendar” was a less well-known feature of the Chinuk Pipa literacy…

The format of it is pretty bare-bones.

You can see that the main idea was to help people in Catholic missionary territory to follow the expected observances of fasting, Sunday mass, etc. 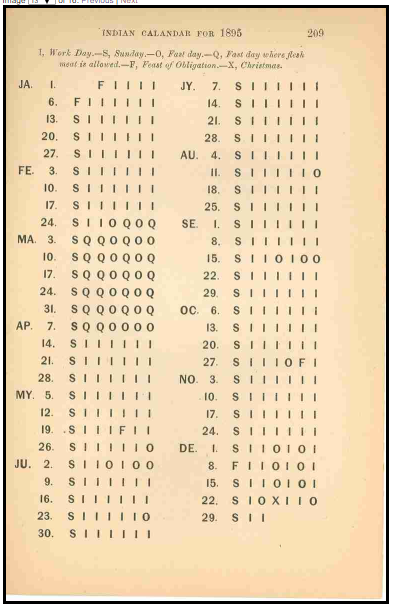 I’m sure some of you are asking, “If this is part of the Kamloops Chinook Jargon literacy, why isn’t it written in Chinuk Pipa shorthand?”

The short answer to that is, I don’t entirely know.

But a large number of issues of Kamloops Wawa do include short calendars for a few weeks or a month, done in Chinuk Pipa.

Some issues even have an Indian Calendar for a full year, a month per page, done up in “the shorthand”.

So it seems like Indigenous readers quickly learned how to use a calendar, which then could be presented in any style of writing.

In the National Archives of Canada, I once found a copy of the Indian Calendar with old pencil marks showing that an 1890s subscriber had indeed made active use of it.

One related detail: everybody who wrote in Chinuk Pipa called the months by their English names, Shanwari, Fibrwari, March, etc. (Not Jargon ones that I’ve seen suggested, like *ilip mun ‘first month’ for January, *mokst mun ‘second month’ for February, and so on.)

All evidence indicates that the day and year numbers in Kamloops Chinuk Wawa also were from English.

Likewise for the names of the days, Mondi, Tyusdi, Winisdi, and so on.

In the “linguistic archaeology” approach that I bring to my research, clusters of heavily English vocabulary typically signal recently borrowed concepts in the Jargon, and the language of calendar dates shows us how very new the Western calendar was in Chinuk Pipa-writing communities.

I’ll leave you with the observation that there’s plenty more calendar-related material in the hundreds of issues of Kamloops Wawa and Father Le Jeune’s associated books. You might enjoy, for instance, his tally of traditional Indian month names in the Jargon.

And here’s some more calendar-related stuff previously published on my website.