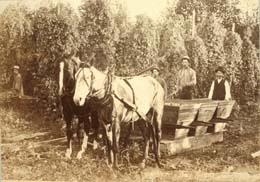 Long letters to the editor used to provide a big chunk of the material in newspapers…..and today’s from the Puyallup Valley of Washington Territory, signed “Sapphire”, tells us even more than we’ve already learned about the connection between Chinuk Wawa and hops-picking. (Link to read about pioneer Ezra Meeker’s role in establishing hops farming there.)

These are the workers that make two boxes a day and are anxious to improve every moment; they are generally “klutchmen.”

Pickers operate in tribal groups, and are hired with special consideration for their Chinuk Wawa skills: 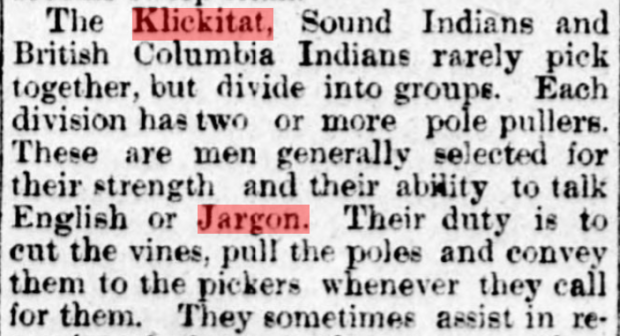 The Klickitat, [Puget] Sound Indians and British Columbia Indians rarely pick together, but divide into groups. Each division has two or more pole pullers. These are men generally selected for their strength and their ability to talk English or Jargon. Their duty is to cut the vines, pull the poles and convey them to the pickers whenever they call for them.

As we often see in the later 1800s, “Jargon” is equated with not just Chinuk Wawa but jokey US English slang:

Generally, two or more go “cahoot,” (to use the Jargon), and pick together as it is necessary to fill the boxes as fast as possible to avoid the hops sinking, the boxes are paid for by size and not by weight.

Some of the Chinook Jargon heard in the fields is quoted, with an observation that many Native people’s command of English resembles mine of the languages I studied in school: 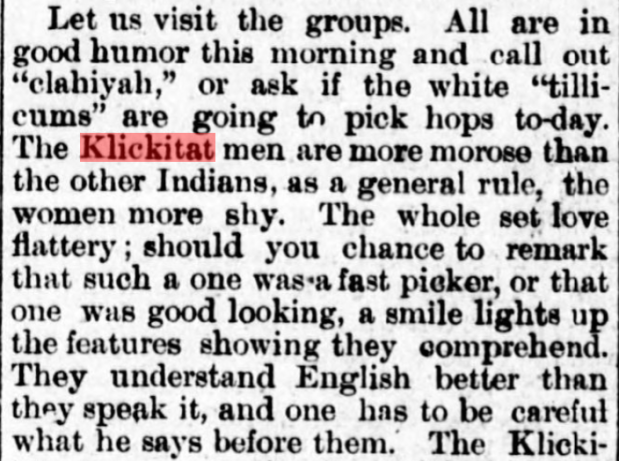 Let us visit the groups. All are in good humor this morning and call out “clahiyah,” or ask if the white “tillicums” are going to pick hops to-day. The Klickitat men are more morose than the other Indians, as a general rule, the women more shy. The whole set love flattery; should you chance to remark that such a one was a fast picker, or that one was good looking, a smile lights up the feature showing they comprehend. They understand English better than they speak it, and one has to be careful what he says before them.

At least one Native picker seems to have a Chinuk Wawa personal name (there were plenty such in the same era); more hopfield Jargon is quoted: 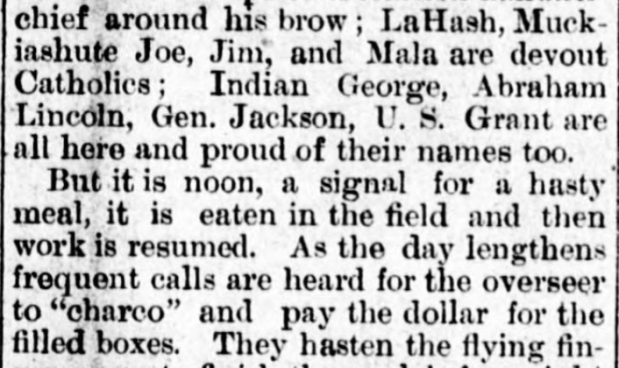 But it is noon, a signal for a hasty meal, it is eaten in the field and then work is resumed. As the day lengthens frequent calls are heard for the overseer to “charco” and pay the dollar for the filled boxes.

Kind of a neat little snapshot into the use of Chinuk Wawa at work, eh?