Packhorses to the Pacific

As a Depression-Era honeymoon trip, a young couple rode horses across BC, retracing Alexander Mackenzie’s trailblazing 1793 steps at a time when Chinuk Wawa was still spoken in many locales.

Their not infrequently hair-raising 1933 experiences are retold in “Packhorses to the Pacific: A Wilderness Honeymoon” by groom (pun intended) Cliff Kopas (1911-1978), who turns out to be an admirable narrator. 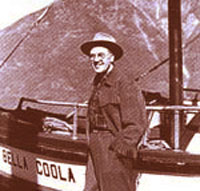 In a section titled “Quesnel to Bella Coola”, Kopas observes without judgment:

Indians, we found, greatly outnumbered white men in the eastern part of this basin and composed its entire population in the western half. 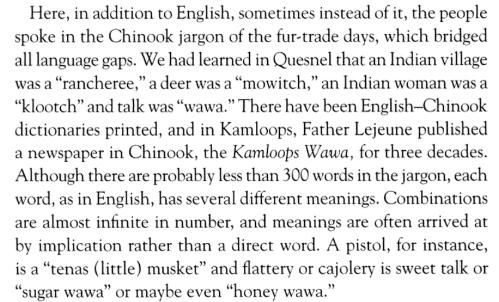 Here, in addition to English, sometimes instead of it, the people spoke in the Chinook jargon of the fur-trade days, which bridged all language gaps. We had learned in Quesnel that an Indian village was a “rancheree,” a deer was a “mowitch,” an Indian woman was a “klootch” and talk was “wawa.” There have been English-Chinook dictionaries printed, and in Kamloops, Father Lejeune published a newspaper in Chinook, the Kamloops Wawa, for three decades. Although there are probably less than 300 words in the jargon, each word, as in English, has several different meanings. Combinations are almost infinite in number, and meanings are often arrived at by implication rather than a direct word.  A pistol, for instance, is a “tenas (little) musket” and flattery or cajolery is sweet talk or “sugar wawa” or maybe even “honey wawa.”

“Kah mika klatawa?” a stranger asked on meeting us, and we could not answer until his companion, a small boy, interpreted “Where are you going?”

Then there was the Indian tongue itself, the Carrier [Dakelh Dene/Athabaskan] tongue, a soft language of vowels and ‘t’s and ‘z’s, with the sound of running water and the wind laughing through the lodgepole pines, a true language of the kla-hannie (outdoors). Some of it had got onto maps and such delightful mouthfuls as Tahuntesko Lake, Punkutlaenkut Lakes and Taiateaze River were frequently mulled over.

There were now permanent Indian villages of log and sometimes frame structure, with the ever-present church rising above, where before there had been Kekuli [‘underneath’] holes for the winter and portable shelters of skin during the summer.

Kopas doesn’t claim to be a great Chinook Jargon expert; here he takes an English-language interpretation of what’s really the Jargon word for “forest”:

Coastal peoples have simplified it by calling them “Stick Indians” or “Sticks” because the trees surrounding them are small compared with the towering ones around coastal villages.

“Oh, yes,” she said. “Delate kloshe muck-a-muck (very good food)” and laughed, maybe at her Chinook, maybe at me for asking so many questions.

A final note, in the “Small World” Department, in Bella Coola later, Cliff Kopas apparently was acquainted with Chinuk Wawa speaker and longtime BC Coast resident Filip Jacobsen, who was the brother of the Johan Adrian Jacobsen who had taught the Jargon to founder of modern anthropology and linguistics Franz Boas!

Honestly, Chinook is the least of the charms of this fine item of regional literature. Cliff and Ruth have quite a story to tell.

2 thoughts on “Packhorses to the Pacific”