How Mourning Dove was right: The Tee-hee-hee Stone

That book of hers has appeared in several editions, with various editors’ touch applied.

One of those editions that I hadn’t registered previously is the anthology “Masterpieces of American Indian Literature” edited by Willis Goth Regier (Lincoln: University of Nebraska Press, 1993). What might attract a pretty broad audience to this volume is that it includes the work of several writers from other tribal backgrounds and regions of North America.

I’m going to limit myself to a very narrow topic from within the book today.

On page 410 there appears this footnote (it’s identical to those in other editions):

En-am-tues is known to the whites as the Tee-hee-hee stone. Tee-hee-hee, which is not an Okanogan word, may be a comparatively modern corruption of the verb meaning “to wish” in the Chinook jargon, the old-time trade language of the Northwest. Derived from the pure Chinook tikekh, “to wish” in the jargon is given variously as: t’keh, te-ke, tik-eh, tik-eigh, tak-eigh, tick-ey, tikky, and so forth…

The large stone in question (eventually destroyed by whites) was a site where passers-by customarily would leave a small offering and make a wish. That makes Mourning Dove’s Chinook Jargon etymology as plausible as it can be. 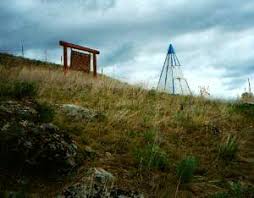 However, I’m unaware of any documented variant of the Chinuk Wawa verb ‘to wish, to want’ (tíki) having three syllables.

Nor is there a known clear example of an “H”-type fricative sound for the second consonant in that word. (Father Le Jeune’s 1924 “Chinook Rudiments” does observe a Stó:lō / Lower Fraser River Salish pronunciation he writes approximately < treh > but the final “H” there reflects a third consonant /x̣/ that was present in most early variants of the verb — thus ~ tq’íx̣.)

Needless to say, I find no indication of a version of tiki that would display both of these features. So even though other evidence confirms Mourning Dove knew some Chinuk Wawa (and knew to identify it with whites as opposed to speakers of her Salish language), and I’ve got no reason to doubt that she knew the site as the “Tee-Hee-Hee Stone”, I respectfully dispute her ingenious etymology.

Because she was on the right track.

First of all, < stone > (stún) is most definitely a Chinook Jargon word.

When we consider the other variants of the name that this famous landmark was known by, like those in the above interpretive sign, we can see how.

Because the boulder was also widely called the < Hee-Hee Stone >, and was associated with a woman’s laughter. Of course híhi is Chinuk Wawa for ‘laugh; fun’, etc.

And a variant of that which is well-documented in the Jargon is < tee-hee >, presumably tíhi. It may have have been characteristic of southwest Washington usage in pioneer times, since we know it first from James G. Swan’s 1857 memoir of Shoalwater Bay and from George Gibbs’s 1863 dictionary that mainly reflects the world of Fort Vancouver.

The latter book wound up exerting a lot of influence on successive Chinuk Wawa publications, as it essentially became the “Hibben line” which produced many popular dictionaries, per Samuel V. Johnson’s 1978 dissertation.

People who used the Jargon were pretty well aware of this word < tee-hee >.  Here on this website, my readers have seen it freely used in the Chinook Jargon operetta “Keel-A-Pie”.

Strengthening our case further still, we know of at least one genuine use of a three-syllable variant of this latter word, also from the general lower Columbia River region. I’ve shown you a 1905 newspaper article that quotes some of Grand Ronde Indian John Casino’s words in Jargon, one of them being < te he hee > for ‘laugh’.  That word isn’t (yet) found in the Grand Ronde tribes’ dictionary — I found it after they published it — but I take it as genuine.

So really, all I’m saying today is, that brilliant author put in hard work on a serious etymology for the “Tee-Hee-Hee Stone”, and it’s my honor if I’m able to contribute to making it as accurate as possible.

I’d like to dedicate this article to the memory of Charlie Quintasket, who was kind enough to chat with me about eighteen years ago in his East Omak kitchen about his sister Christine and about Chinook Jargon. límlmt!

One thought on “How Mourning Dove was right: The Tee-hee-hee Stone”