We have a small sample of the Chinuk Wawa of a major figure in British Columbia history:

The journal that cites him looks to have “corrected” his spelling of his own name, maybe taking a dim view of his intelligence from the following opinions 🙂 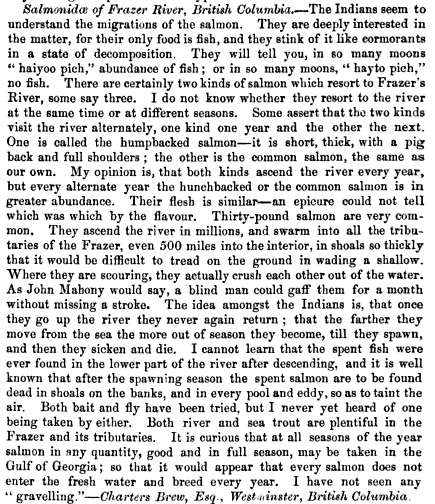 Salmonidae of Frazer River, British Columbia.-— The Indians seem to understand the migrations of the salmon. They are deeply interested in the matter, for their only food is fish, and they stink of it like cormorants in a state of decomposition. They will tell you, in so many moons “haiyoo pich,” abundance of fish; or in so many moons, “haylo pich,” no fish. There are certainly two kinds of salmon which resort to Frazer’s River, some say three. I do not know whether they resort to the river at the same time or at different seasons. Some assert that the two kinds visit the river alternately, one kind one year and the other the next. One is called the humpbacked salmon—it is short, thick, with a pig back and full shoulders; the other is the common salmon, the same as our own. My opinion is, that both kinds ascend the river every year, but every alternate year the hunchbacked or the common salmon is in greater abundance. Their flesh is similar—an epicure could not tell which was which by the flavour. Thirty-pound salmon are very common. They ascend the river in millions, and swarm into all the tributaries of the Frazer, even 500 miles into the interior, in shoals so thickly that it would be difficult to tread on the ground in wading a shallow. Where they are scouring, they actually crush each other out of the water. As John Mahony would say, a blind man could gaff them for a month without missing a stroke. The idea amongst the Indians is, that once they go up the river they never again return; that the farther they move from the sea the more out of season they become, till they spawn, and then they sicken and die. I cannot learn that the spent fish were ever found in the lower part of the river after descending, and it is well known that after the spawning season the spent salmon are to be found dead in shoals on the banks, and in every pool and eddy, so as to taint the air. Both bait and fly have been tried, but I never yet heard of one being taken by either. Both river and sea trout are plentiful in the Frazer and its tributaries. It is curious that at all seasons of the year salmon in any quantity, good and in full season, may be taken in the Gulf of Georgia; so that it would appear that every salmon does not enter the fresh water and breed every year. I have not seen any “gravelling.” —Charters [Chartres] Brew, Esq., Westminster, British Columbia

It’s unclear whether the above came via Sir John Richardson, but that looks to be the likeliest attribution since he also forwarded other Northwest correspondents’ information that’s quoted above Chartres Brew’s words.

Irish military veteran Chartres Brew (1815-1870) would indeed have been out and about talking with regular people including Native ones.

His position as Gold Commissioner during the big Fraser River gold rush of 1858 put him smack dab in the middle of the most intense spasm of intercultural contact in our region’s history.

Thus he witnessed the sudden importation of Chinook Jargon from its previous center around the lower Columbia River of Oregon-Washington, to a new arena where it proved an invaluable tool for all the ethnic groups meeting each other for the first time.

Brew’s “haiyoo pich” and “haylo pich” are no goldmine of new information for us, but their unique spellings and his consistently informal tone suggest that he was providing them from his actual experience.

Today’s find is among the few eyewitness accounts of the Jargon from the early days of mainland BC, and the only documentation that I know about for Brew’s use of Chinuk Wawa.