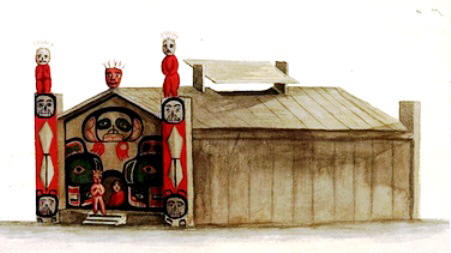 This little new discovery is one of the earliest substantial Chinook Jargon texts ever published.

It’s doggerel, self-proclaimed.  The eye-dialect spellings (Costigan’s Irish accent?) in the English parts are a giveaway about that anyhow.

The colloquial English and the Chinook Jargon portions mostly replicate each other.

My *asterisks* indicate blurry spots in the image I was working off of.  [Brackets contain explanatory glosses of the CJ.]

This poem is a response to journalist Charles Nordhoff‘s (author of “Nordhoff’s Communistic Societies of the United States” and grandfather of the Charles Nordhoff who co-authored “Mutiny on the Bounty”!) ideas on Alaska as a possible penal colony, which had been widely disseminated also in Harper’s.

The poem’s voice is that of an enlisted soldier who’s been at his foreign post too long, going partway native and bored out of his mind.  He’d pay to be anywhere south of Alaska.  This wish would probably be granted, in the event, because as the US Army Alaska website tells (with my emphases):

The U.S. Army’s important history in the Great Land began at the very moment Alaska became American soil on October 18, 1867. Elements of the 9th Infantry were on hand as the Russian Golden Eagle was lowered and the Stars and Stripes were raised in Sitka, which then became headquarters for the Alaska Military District.

Charged with maintaining law and order in the new territory, Soldiers helped quell uprisings and built new forts at Wrangell, St. Paul Canal, Kodiak Island, and on the Kenai Peninsula. They also enforced regulations regarding the killing of fur seals, whose population had been severely depleted during the Russian reign.

The Army relinquished control of Alaska to the U.S. Treasury Department in 1877, but did not entirely leave the territory. The Signal Corps operated weather stations, and a number of officers led small geographic explorations to learn more about the territory.

It’s not trivial to point out that our poem makes the rare effort and achievement of rhyming in the Jargon.  If you see enough verse in this pidgin you’ll realize that that’s hardly ever done, and if you consider how few words are in CJ’s vocabulary you might grasp how hard it is to find rhymes.  However, today’s doggerel accomplishes this partly by some slavish literal translations from English expressions, and partly by purchasing poetry at the expense of proper CJ grammar, for example saying mika copa kolan iscum (“you by the ear are holding”) instead of the more intelligible street-Jargon mika iscum copa kolan (“you’re holding [it] by the ear”).  (An American expression in that era was “to have/get/catch the wrong pig by the ear“.)

All things being equal, I would take “Costigan” as a humorous pseudonym that, together with accented pronunciations like “thim”, “ating”, and “divil”, reflects the large numbers of Irish immigrants in the American military at the time.   The sources seem to agree that 150,000 recent immigrants from Ireland served in the Union Army, and perhaps 20,000 with the Confederacy, in our Civil War.

But alternatively, let me guess that “Costigan” is to be understood as a Scots-Irish name, common in and characteristic of North Carolina and Appalachia.  Evidently the KKK was heavily “Scotch-Irish” in origin.  This would help explain the fond references to the recently suppressed first-wave Ku Klux Klan, which strike the modern eye as so bizarre.

That reference to merchants demanding payment “in coin” for the luxury item of potatoes may have resonated strongly for contemporary readers experiencing the devastated post-Civil War US economy.

Quite a time capsule we have here with today’s poem…