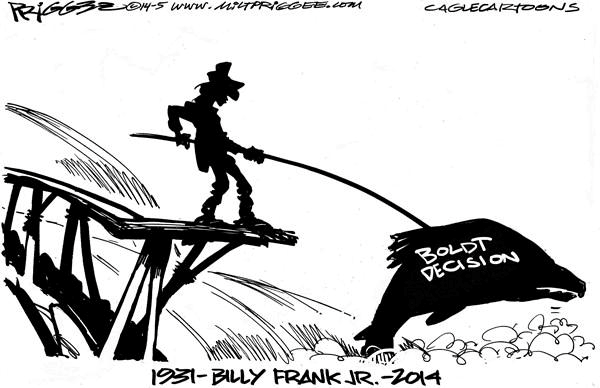 Today’s treaty Article language later got litigated in the momentous Boldt Decision of 1974. That’s how important questions of translation can be…

lands. Provided, however, That they shall not take shell-fish from any beds
pi wík-ɬúsh pus úkuk s(h)áwásh-tílixam ɬáska t’ɬáp kʰánawi-íkta ləkwəchi pi sáltsəqw-
and not-good if these Indian-people they get any-kind clam and saltwater-
‘But it will not be all right for these Indian people to get any kind of clams or sea-‘

Here again you can see, even in such a brief Article, enormous differences between languages in domains such as:

To a lifelong speaker of English within an anglophone cultural context, asking what the meanings of any of these expressions are may seem the height of absurdity — they’re self-evident to us, aren’t they?

But to a translator, let alone to a non-speaker of English such as approximately 99% of the Native people at the Point No Point treaty council, every word has to be considered, as must its relation to those around it, and its history. Far from all languages possess expressions equivalent to ‘the right of’, or even ‘or’. Those languages that share with Chinook Jargon a lack of such terms must find alternative ways of conveying a comparable meaning, such as adjusting the complex balance among syntax, semantics, and grammar in ways that establish a joint understanding of reality.

Do you think the result of translating the US government’s English into Chinuk Wawa for people who only spoke the latter as a foreign language would have been an ironclad mutual understanding?