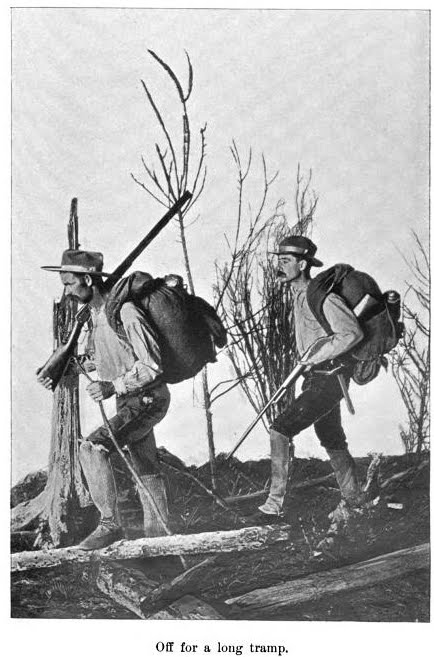 “You’d better go and cut some wood for your clutchman [squaw]. As I came by I saw her chopping and splitting that old log in front of the house,” replied Maurice.

This book’s title page bills it as derived “from the field notes of Lewis Lindsay Dyche“.  Dyche was a scholar well-known for his fieldwork, in this instance somewhere in the Kettle River boundary country near Rock Creek, BC.

You won’t find tons of material that tells much about language on the Inland Northwest frontier in this volume, but the word clutchman, addressed to “the ranchman Armstrong”,  is among its surest traces of Chinook Jargon use in this particular section circa 1890.  There’s also a mention of horses as cayuses on page 210.  And this:

On the first day out from Thorp’s ranch thirty-seven deer were seen. There was a camp of Indians near old Camp Victoria, and here Dyche stopped for a few minutes’ talk with the redskins. Dozens of dogs greeted him as he approached the camp, and about a dozen bucks came out and stretched themselves on the ground near the naturalist, with the exclamation “How!”

As the red men could talk a little broken English, the hunter endeavoured to get information from them regarding game. The spokesman held up five fingers and said, “Mowwich,” indicating that he had killed five deer. Then pointing to each of his companions in turn, he held up the number of fingers suitable to their achievements and repeated the word. Dyche asked about sheep and the Indian pointed to the mountains far to the west. He then asked about goats, or “white sheep.” The Indians consulted a little and then pointed to the crags in the northwest and said, “White sheep high up.” One Indian supplemented this information with the remark, “Me no hunt him,” whereat the others laughed boisterously. Dyche declined the invitation to “come down,” and rode on until a suitable camping-place was found.

I kind of think the “broken English” here is a typical mix for the time and place: some English blended with Chinook Jargon.

Circumstantially viewing things, more than one rancher (e.g. Thorp too) is noted as married to a “squaw”, and with that degree of close cultural contact, Jargon has often been documented as a common language of this upper Columbia country.

As a Northwest linguist I was also interested to find the notoriously hard-to-define word rancheree (sometimes you see it spelled rancherie).  Sometimes people use it to mean a Native community, an Indian Reserve, but here it’s a structure, and it’s clearly contrasted with a ranch:

Next day Armstrong’s ranch was reached in a blinding snow-storm. An abundance of grass gave the horses good food and they were turned loose to shift for themselves. The first day was spent in building a tent made of poles and spruce boughs, called in that country a rancheree. A few days were now spent in prospecting in every direction. Many deer were seen daily near the rancheree, but there were no signs of caribou. Each night Armstrong came over from his ranch, about a hundred yards away, and the mountaineers told stories of their life while Dyche cleaned and prepared his specimens.

I have little else to report.  Honestly, this book isn’t one of the more colorful or engagingly written memoirs from our region; maybe you’ll get the most out of it if you’re a hunter too.  If so, go get it, it’s on Google Books.

← The Thunder Bird Tootooch Legends
The Heroine of ’49, by Mary P. Sawtelle, MD →