If you have heard of the Chinook Jargon trade language, a.k.a. Chinuk Wawa, you are doubtless aware of the outsized importance attaching to the Hudsons Bay Company in our Pacific Northwest history.

One of the longest-lived rumors in this part of the world is that the HBC “invented” Chinook Jargon.

It’s stereotypically reported that The Company used The Jargon throughout its vast North American holdings, leading to straight-out fictional portrayals like the Chinook-talking Indians in “Across the Wide Missouri“.

The truth is more like this: the HBC did extensively use the Jargon around Fort Vancouver on the Columbia River, back in the earlier documented days of this pidgin language, and also spread its use as far abroad as was useful.  (See perhaps Alexander C. Anderson’s  1858 lexicon, later plagiarized as “Fac Simile of Chinook Jargon” by “Old Employee of the HBC”–although his disavowal of it has been found in an archive; that is material for a later post!)  The extent of usefulness turned out to be some ways up the Columbia, some ways south in Oregon to northern California, and eventually quite a ways northward along the BC coast. A neat document of the latter is an 1840s HBC ship’s vocabulary of Chinuk Wawa found in their archives.  (A ship that, devastatingly, is reported to be the likely vector of smallpox northward on the coast…though it was almost bound to happen one way or another.)

Other, more inland, areas generally came to use the Jargon (as far as I can find positive evidence) only later, when non-Indigenous people finally flooded in — usually in connection with gold rushes.  I believe that is how the Kamloops region eventually became the greatest hotspot of Chinookology, and because the Jargon became a useful tool for interethnic communication up there, the HBC got on board and spoke to its Native patrons in it.

That’s the back story, then, on a second fur-buying ad in Kamloops Wawa.  Not long ago, I shared a shorthand Chinuk Wawa ad from a Minnesota buyer headlined “Raw Furs — Read This!“.  Now, in a commercial retaliatory move, we have what I believe is the first advertisement ever found in Chinook by the HBC: 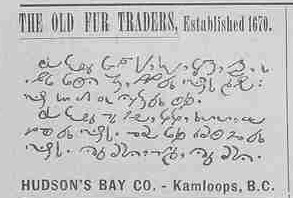 Aspects of this ad are interesting to think about.

Linguistically, this is the first documented reference to the HBC in Chinook Jargon that I’m aware of.  We see a couple of variants: the entity is called both “Hudson Bay” and “Hudson”.  As is usual, the Jargon reflects street English, not official use, so we don’t see the formal “Hudsons Bay Company” spoken of here.

Who wrote this ad?  My money — or my stash of furs — is on Father Le Jeune, the editor of Kamloops Wawa.  It’s got his typical phrasing, it closely echoes the wording of the “Raw Furs–Read This!” ad, and other reasons back me up here.

What I’d like to point your attention to, though, is the irony involved here.  Le Jeune accepted ad money from the local HBC store, and therefore in good faith (no pun intended there) urged his readers to visit that establishment. Yet the “pass system” was in effect, illegally but with the force of the federal government behind it, preventing Canadian Indians from freely traveling where they liked.  I’m not sure if Le Jeune would’ve been among those Whites empowered to sign those passes, but he sure was using that system for his church’s own purposes, as we’ve seen in the Chinook “temperance pledges” published in Kamloops Wawa.  More than one of those pledges expressly forbade what the wording called kaltash mitlait, or hanging around, at stores.

So it makes you marvel.

One thought on “The Old Fur Traders, Established 1670”