From Bulmer’s Preliminary geographical notes on the US

This blog’s reader Sam Sullivan sent in a draft translation of some really compelling material — a unique early attempt at education in Chinook Jargon:

“From Bulmer’s Chinook, Vol. 5: Preliminary Geographical notes on the U.S.” in the Kamloops Wawa newspaper.  (See my recent posts on an article on the same mimeographed page, and on Bulmer, for background.)

Incidentally, I’m always amused that Father Le Jeune saw fit to teach his Aboriginal readership about US rather than Canadian geography!  I can imagine their confusion.

Sam did a nice job extracting the gist from the shorthand Chinook Jargon.  His quick progress at reading it shows that you can indeed get yourself direct access to that treasure trove of firsthand material. 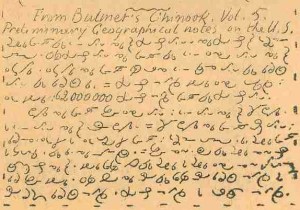 With Sam’s blessing, I’m reproducing his translation, which you can compare with my rendition of the Chinuk Wawa and its meaning.  I’ll remind you that “=” is not an equals sign but a section-dividing punctuation mark in the Chinuk pipa shorthand.  I’m putting asterisks next to a couple of notable points that I’ll discuss at the end. My suggested translation is in quotation marks.

From Bulmer’s Chinook Volume 5.
Preliminary geographical notes on the US.

Kanada, ayu kol pi ayu snas kol*[5] mitlait: Yunaitid Stits, kah nsaika mitlait
Canada many call and much rain, United States and we are
“Canada, [where] there’s a lot of cold and snow: the United States, where we are,”

Washington iaka nim.  Klaska mamuk lo kopa nsaika pi nsaika aias taii Prisidint
Washington is the name. They make law for us and our elesetant
“which is called Washington.  They make laws for us, and our great chief the President”

kanamokst klaska.  Ukuk los*[7] iaka*[8] tlus kopa mamuk tlus kanawi tilikom pi
together they this loss. This is good for every person,
“[does so] together with them.  These laws are good for making everyone behave and”

Overall, there are internal clues in this short text that show Bulmer’s distinct authorial voice in Jargon, as well as those that indicate Le Jeune acting as not only his copyist but his editor.

This late 1800s text provides a fascinating little study in that time’s approaches to Western-style education of Aboriginal people.  It definitely demonstrates that Bulmer and Le Jeune shared the notion that Chinook Jargon wasn’t a mere useless trade lingo, but instead a tool for conveying real and valuable information.