A visit to the Roslyn, WA museum

On our way back to Spokane from a visit to the coast, we stopped in at Roslyn, Washington, one of my mom’s and late dad’s favorite little towns.

This town was founded in the 1880s by the Northern Pacific Railway Company (NPRR) and made its fortune from coal mining till the 1960s.

It remains exceptionally well preserved, making this a superbly rewarding stop off the main highway.  (Thanks to the kind local lady who spotted us a dollar at the cafe that only takes cash!)

The Roslyn Museum‘s organizers and supporters have done such a great job with this place.  I enjoyed taking up the volunteer staff’s challenge to ask them anything, finding that they did indeed have information on the onetime Slovenian community of Roslyn, viz. this vintage SNPJ pennant:

(SNPJ = Slovenska Narodna Podporna Jednota, the Slovenian National [Mutual] Benefit Society, remarkably still in existence and with a website.  I know, Jednota is such a quaint way to say it!)

The Chinook Jargon tie-in that I inevitably found was a front-page Cascade Miner newspaper headline about a disaster at the Skookum Mine:

Notice too the ad for a “Servian drama, ‘War at Kosovo’ “, with a dance after the performance!

The volunteers on hand, between the three of them, were also able to give me more information than I’ve ever chased down about the long-gone town of Tunnel City, WA.  Apparently it was at the west end of the Stampede [Pass] railway tunnel, and only Easton at the east end has survived.  (There’s a Highway 90 exit for Easton if you’d like to see another historic town, as well as one for nearby Hyak, WA, named with the Chinook Jargon word for “fast, quick”.)

My kids enjoyed this mini trolley used to shuttle cash and change between a store’s or bank’s front desk and back room:

And this 1896-vintage telephone switchboard brought to life some of the meaning of a classic American kids’ song that they know:

(“Hello operator / Give me number 9 [it’s being pointed at in the photo] / And if you disconnect me / I’ll kick you in your…Behind the refrigerator / There was a piece of glass” etc. etc.)

One book in the museum collection, “History of Central Washington (Illustrated)”, looked particularly promising, so I’ll have to see if I can chase it down to read:

Another book of local interest is the circa 1930 high-school yearbook, the Klailax.

(Is that an Indian name?  Looks Salish.  Maybe Sahaptian.)

There’s also a real old mimeograph, something like what Father Le Jeune would’ve used to publish his CJ newspaper “Kamloops Wawa” in BC: 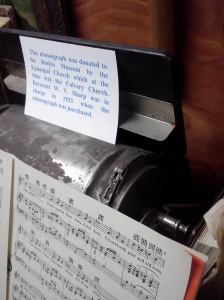 Much less literary is the display of homemade knives, circa 1860, made from old saw blades: 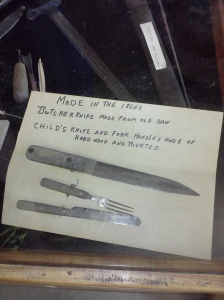 One last item to share, not from Roslyn but from our trip: our Chinook Indian friends on the coast gave the kids a couple beautiful gifts.  Nayka tiki wawa hayu masi khapa msayka! 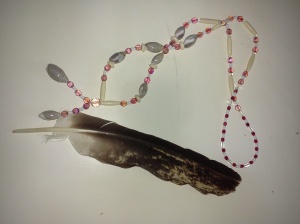 ← The Land of the Muskeg
Skookum Mine mystery →

One thought on “A visit to the Roslyn, WA museum”