1793-1825: Why Métis speech dominated the PNW Interior before Chinook Jargon did

First, maps from the Hudson’s Bay Company Archives. I’m going to show the dates of founding of those that pre-date Fort Vancouver and the creolization of Chinook Jargon into a Métis family language (1825): 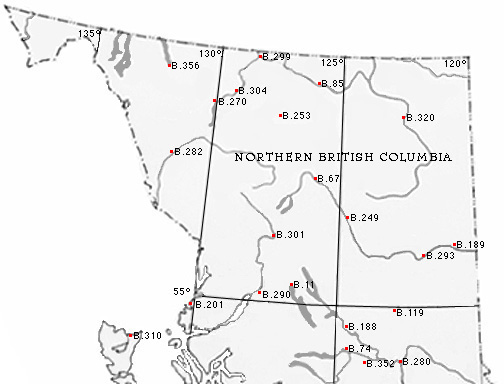 Here’s another nice site listing fur-trade forts in BC (including the NW Co.), with a page each for the north, southern BC, and Vancouver Island. This adds to our list:

There’s also, on the US side of the modern border,

The obvious pattern here is, the great majority of the pre-Fort Vancouver fur establishments (13 of the 17) were in interior British Columbia, with 8 in the northern half & 5 in the southern half.

This arbitrary division by the HBC Archives coincides pretty closely with the historic extent of Chinook Jargon-speaking territory. CJ came to be used quite a lot, as far north as the Barkerville & Quesnel area in the Cariboo.

But that’s a chance coincidence only.

More relevant is that the list of pre-Fort Vancouver forts amounts to a map of where male Métis fur-trade workers from Red River (etc.) were living and raising families with wives who prominently included BC First Nations women.

That early “Pacific NW Métis nation” somewhat thinned out southwards toward Spokane’s region. But this was certainly the dominant ethnic group in the fur trade era’s speech environment. The largest, most commented-on example of their society is the Fort Vancouver world, but that community was really just the culmination of decades of Métis society out here on the edge of the continent.

These folks’ ways of speaking, primarily their distinct Métis French and their Plains Cree, were the main languages of the fur trade; BC Indigenous people are documented as having spoken these languages with them.

There are also tantalizing clues that the mixed Cree-French language of the Métis, Michif, may have been spoken in this area! However, seeing as how there are exceedingly few definite mentions of Michif anywhere before my lifetime (even though it appears to have existed by about 1800), this remains a speculation for now.

I feel like I’ve successfully brought you my simple point. Métis people have been of enormous importance in the interior of what’s now British Columbia from essentially the first moment of contact between BC First Nations and the Newcomers.

Therefore it’s no surprise that we find many, many traces of Métis speech in Chinuk Wawa, and in documents of things like interior BC (and nearby WA, ID, and MT) history and tribal languages.

Northern BC, the zone where we find the most traces of fur-trade era Métis occupation, is also where we tend to find enduring post-fur trade Métis communities that are clearly recognized in local oral tradition. As a non-British Columbian, I’m fascinated that it’s been such a hard battle to establish in Canadian courts that these communities exist.

Kosay ti pens?
Kata maika tomtom?
What do you think?