From more than one source, I’d like to present you with some Chinook Jargon-related dirt on the notorious Seattle house of prostitution, the “Illahee“, famed in song and story.

Famed in Northwest song and verse from frontier times, this establishment deserves an entry of its own on my website.

From the following piece I learn that the famous “Seattle Illahee” or Illeah was also known as the Mad House (or “Pennell’s [sic] mad-house”), and the Sawdust Pile.

From newspaper coverage such as I show afterward, we have confirmation of these names. Mr. Pinnell was considered a synonym for trouble, and a corrupting influence on local politics. It appeared to many that when he finally sold some adjoining land to the city for $2,000 as long as he promised to close the Mad House down, he was extorting the municipal government, who had often been accused of being under his sway.

(Even more colorful is the slang name of Seattle red-light district, the Lava Bed. But I strongly suspect that’s an anachronism…it surely has to have come after the famous 1873 Modoc War.)

Pinnell’s establishment flourished circa 1861-1874, in peak frontier times, which along with its employment of Native women helps explain its strong connection with Chinuk Wawa. Coll Thrush’s very fine history, “Native Seattle“, which includes a chapter titled “Seattle Illahee”, specifies that many of the employees were from British Columbia tribes. Spending as much time as they would’ve with White customers, at a time when Euro-Americas were still very much a cheechako minority, these women almost certainly spoke CW, as well as picking up some English.

I’d be interested to find Pinnell’s published advertisements! Apparently they ran in the Intelligencer, today known as the P-I (Post-Intelligencer). But there seem to be no online archives of that early paper.

Here’s deeper background on the Illahee:

The interesting figure of John W. Pinell looms in the history of Seattle and the earliest history of the county medical system. Pinell arrived in Seattle in 1861, when it had six hundred inhabitants, five hundred of them young, unmarried, and masculine. Even the newspapers lamented the rather sorrowful state of the men of the village: if they any libido at all, they were faced with a problem. The town was too small for adultery and there were few unattached white women. The only feminine companionship available was Salish Indian girls, whose cultural background made them easily available, but whose hygienic and cosmetic practices made them less than appealing to the young men of Seattle, who were hardly models of personal hygiene themselves, but thought they smelled better.

Pinell, fresh from San Francisco’s Barbary Coast, was astute enough to recognize the profitable possibilities in this little town by Elliott Bay, and within a month after his arrival, there arose on the sawdust fill immediately south of Mill Road, now Yesler Way, a frame building named the Illeah and offering music, dancing, drinking, and well-scrubbed Indian girls. In sight of the Mill and the ships anchored in the Sound, the Illeah soon resounded with the stomps of hobnail boots and caulks, and Maynard’s claim was on its way to becoming Skid Road, or, as it was more widely known in the 1860s, the Lava Bed, truly rivaling in debauchery and reputation the Barbary Coast.

A few years after opening the Illeah, which Seattlites called either the Mad House or the Sawdust Pile, Pinell secured a lease on the county farm in Georgetown, and he was apparently such a model tenant the lease was renewed for a three-year period in 1872. Two years later, however, the more bourgeoise members of the city of Seattle were obsessed with stopping the spread of vice in and from the Lava Bed, and there was a call for a moral clean-up. The county wasn’t too interested in keeping the Duwamish farm, but it was interested in securing a new location for the county building. Moreover, it was concerned about the way in which Pinell’s tract near the Mill had become the center of an increasing number of what were known as squaw dance halls. Thus, in a strategem intended to accomplish all its goals, it was ordered that the county buy Pinell’s land “for the purpose of building thereon a court house and jail . . said John Pinell agreeing to enter into bonds conditioned that he, the said Pinell, his heirs or assigns will not sell or dispose of any spiritous or malt liquors or carry on any disreputable business in the premises now occupied by him or in any other buildings that may hereafter be erected on any portion of blocks nineteen and twenty-eight of said Maynard’s plat.”

The exchange of deeds was effected; Pinell cleared $2,000 in gold coin, and the county owned a whorehouse. The commissioners and Pinell were happy with the deal, but the courts weren’t. A judge decided that the county had no right to make such a trade, and the deal was called off. A new order resulted in the county regaining the farm and Pinell his land, along with a retail liquor license. While in possession of the Illahee, the commissioners had thoughtfully torn the house down. But the moral uplift of Seattle was short-lived indeed. Other establishments, bigger if not better, soon took its place, for once born. Skid Road would not die. No longer a corporate madame, but with the county farm back on their hands, the county conmissioners attempted to make it less a liability, and decided finally that it should be placed into the service of the indigent and sick. Thus in 1877, they advertised in the “Weekly Intelligencer” for bids for “a lease of the county farm for one year, conditioned that the leasee will board, nurse and care for the county poor at a stated price per day for each person — said leasee to have the labor of said poor when in the opinion of the attending physician they are able to work — the county to furnish medical, medicinal and surgical aid and suitable buildings, beds and clothing for said poor.” Bids were received, the Bagleys were awarded the contract for medical and surgical attendance of the county poor, including medicines for one year for $300.

— from “The Emergence of Hospitals in Washington State and King County“, Address presented at Harborview Medical Center Centennial Banquet, 18 May 1977, Seattle, Washington by Charles W. Bodemer 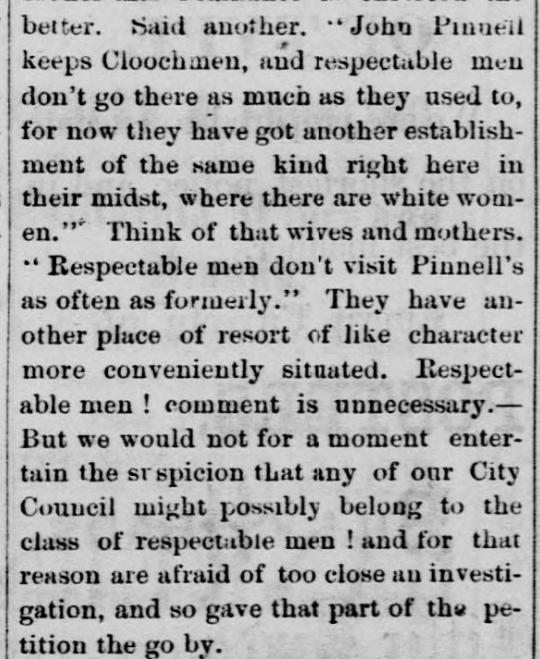 Said another, “John Pinnell
keeps Cloochmen, and respectable men
don’t go there as much as they used to,
for now they have got another establish-
ment of the same kind right here in
their midst, where there are white wom-
en.” Think of that wives and mothers.
“Respectable men don’t visit Pinnell‘s
as often as formerly.” They have an-
other place of resort of like character
more conveniently situated. Respect-
able men! comment is unnecessary. —
But we would not for a moment enter-
tain the suspicion that any of our City
Council might possibly belong to the
class of respectable men! and for that
reason are afraid of too close an investi-
gation, and so gave that part of the pe-
tition the go by.

kahta mika tumtum?
What do you think?

← 1827-1830: The Fort Langley Journals and BC Métis
Distinguishing “Métis” from “métis” in the Chinook Jargon world →