I sure wish I could’ve met and talked with this remarkable Syilx (Okanagan) man.

Known to his Settler neighbors by a baptismal name of Dominick or Dominee, the person pictured here is remembered as speaking genuine BC Chinook Jargon (i.e. it has Chinese Pidgin English-like features!), mixed with some English.

That was a common way of talking in interior BC in the 1890s and onwards.

Read on for a few colorful anecdotes of someone remembered fondly. 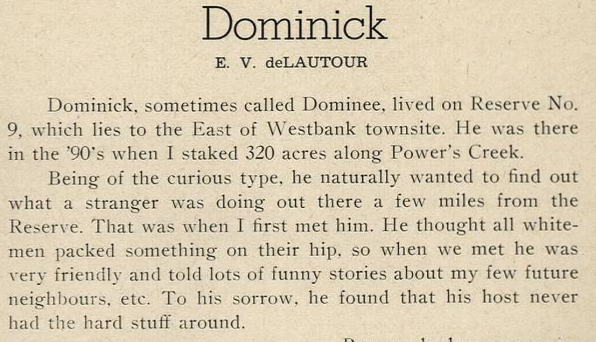 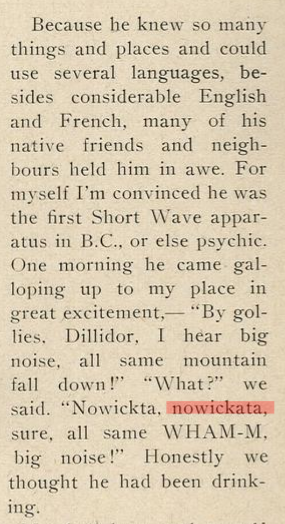 Dominick, sometimes called Dominee, lived on Reserve No. 9, which lies to the East of Westbank townsite. He was there in the ’90’s when I staked 320 acres along Power’s Creek.

Being of the curious type, he naturally wanted to find out what a stranger was doing out there a few miles from the Reserve. That was when I first met him. He thought all white-men packed something on their hip, so when we met he was very friendly and told lots of funny stories about my few future neighbours, etc. To his sorrow, he found that his host never had the hard stuff around.

Because he knew so many things and places and could use several languages, besides considerable English and French, many of his native friends and neighbours held him in awe. For myself I’m convinced he was the first Short Wave apparatus in B.C., or else psychic. One morning he came galloping up to my place in great excitement,— “By gollies, Dillidor, I hear big noise, all same mountain fall down!” “What?” we said. “Nowickta, nowickata, sure, all same WHAM-M, big noise!” Honestly we thought he had been drinking.

But, that same afternoon the Marshall boys and myself rowed over to Kelowna for our mail and when the “Aberdeen” pulled in, the first thing Purser McDonald told everybody on the wharf was: “That town of Frank is wiped out, the mountain fell on them!”

Again, a few years later, exactly the same thing happened, but this time Dominick was more excited about a “big long time noise!” and when we got to where (by this time) there was a phone connection, it was the San Francisco earthquake and fire!

I have always wanted to put these on record, and to Dominick’s credit. Whether a stranger will believe these strange facts or not, they are true statements, nevertheless.