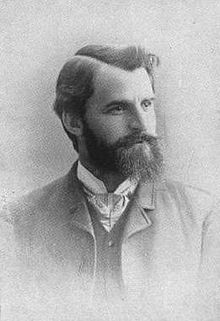 A Klondike gold rusher, and later a Pulitzer Prize recipient, today’s author is an attention-getter.

This autobiographical account tells how Garland took the less-used “Ashcroft” overland route north in 1898 (he references contemporary news of “the Spanish war”), so we hear some Chinuk Wawa along the way as his group traverses British Columbia’s Cariboo region and heads to the coast.

I’m glad I’ve given Garland’s book more than one look.

At first glance I had thought he just didn’t know Jargon well, which indeed is his claim.

But I’ve come to realize he was actually quite a keen observer — one giveaway being that he shows some care and sympathy in decribing the Indigenous people he meets.

His notes about various encounters are well worth our attention.

On page 48, north of Quesnel at the confluence of the Blackwater (West Road) and Fraser Rivers, there’s a funny folk etymology in some Jargon addressed to their string of packhorses — file this under our ongoing category of “non-humans who understand Chinook“:

With a last look at the camping ground to see that nothing of value was left, we called [to the packhorses] in exactly the same way each time, “Hike, boys, hike, hike.” (Hy-ak: Chinook for “hurry up.”)

On page 55, among the descriptions of Garland’s fellow adventurers:

” Siwash [Indian] Charley ” was a Montana miner who spoke
Chinook fluently, and swore in splendid rhythms on occa
sion. He was small, alert, seasoned to the trail, and
capable of any hardship.

On page 57, discussing a tragic smallpox epidemic, Dakelh (Carrier Dene) people speak the region’s characteristic mix of pidginlike English with Chinuk Wawa that we’ve seen in many other sources from the later 1800s onward for about a century:

I seized the opportunity to talk with them,
and secured from them the tragic story of the death of
the Blackwater Indians. “Siwash, he die hy-u (great
many). Hy-u die, chilens, klootchmans (women), all
die. White man no help. No send doctor. Siwash
all die, white man no care belly much.”

In this simple account of the wiping out of a vil-
lage of harmless people by “the white man s disease ”
(small-pox), unaided by the white man s wonderful skill,
there lies one of the great tragedies of savage life. Very
few were left on the Blackwater or on the Muddy,
though a considerable village had once made the valley
cheerful with its primitive pursuits.

They were profoundly impressed by our tent and gun,
and sat on their haunches clicking their tongues again
and again in admiration, saying of the tent, “All the
same lilly (little) house.” 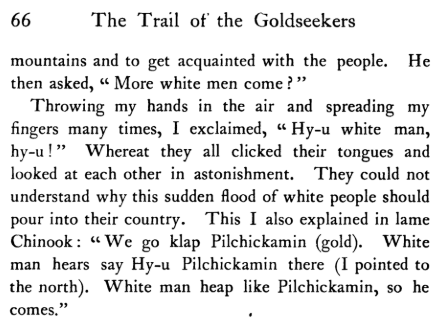 We were visited by all the Indians from Old Fort
Fraser, which was only a mile away. They sat about
our blazing fire laughing and chattering like a group of
girls, discussing our characters minutely, and trying to
get at our reasons for going on such a journey.

One of them who spoke a little English said, after
looking over my traps : “You boss, you ty-ee, you belly
rich man. Why you come?”

This being interpreted meant, “You have a great
many splendid things, you are rich. Now, why do you
come away out here in this poor Siwash country?”

66 The Trail of the Goldseekers

mountains and to get acquainted with the people. He
then asked, “More white men come?”

Throwing my hands in the air and spreading my
fingers many times, I exclaimed, “Hy-u white man,
hy-u!” Whereat they all clicked their tongues and
looked at each other in astonishment. They could not
understand why this sudden flood of white people should
pour into their country. This I also explained in lame
Chinook: “We go klap Pilchickamin (gold). White
man hears say Hy-u Pilchickamin there (I pointed to
the north). White man heap like Pilchickamin, so he
comes.”

All the afternoon and early evening little boys came
and went on the swift river in their canoes, singing wild,
hauntingly musical boating songs. They had no horses,
but assembled in their canoes, racing and betting pre-
cisely as the Cheyenne lads run horses at sunset in the
valley of the Lamedeer. All about the village the grass
was rich and sweet, uncropped by any animal, for these
poor fishermen do not aspire to the wonderful wealth of
owning a horse. They had heard that cattle were com-
ing over the trail and all inquired, “Spose when Moos-
Moos come?” They knew that milk and butter were
good things, and some of them had hopes of owning a
cow sometime.

On pages 81-82, perhaps it’s a Wit’suwit’en (Babine Dene) young man who uses such a linguistic blend to engage in conversation with the travelers in the Bulkley Valley and kindly shows them how to slake their thirst with pine cambium (we’ve seen a word for it in Jargon from nearby Tsilhqot’in / Chilcotin Dene people): 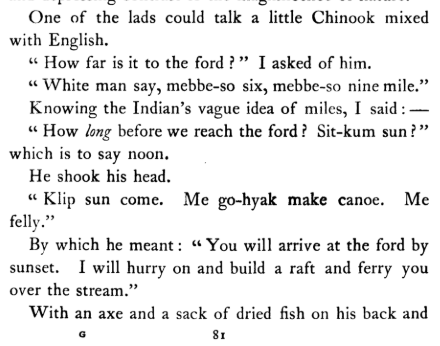 One of the lads could talk a little Chinook mixed
with English.

Knowing the Indian s vague idea of miles, I said :

“How long before we reach the ford ? Sit-kum sun ? ”
which is to say noon.

He shook his head.

By which he meant : ” You will arrive at the ford by
sunset. I will hurry on and build a raft and ferry you
over the stream.”

82 The Trail of the Goldseekers

a poor old shot-gun in his arm, he led the way down
the trail at a slapping pace. He kept with us till dinner
time, however, in order to get some bread and coffee.

Like the Jlcarilla Apaches, these people have discov-
ered the virtues of the inner bark of the black pine. All
along the trail were trees from which wayfarers had
lunched, leaving a great strip of the white inner wood
exposed.

“Man heap dry this muck-a-muck heap good,”
said the young fellow, as he handed me a long strip to
taste. It was cool and sweet to the tongue, and on a
hot day would undoubtedly quench thirst. The boy
took it from the tree by means of a chisel-shaped iron
after the heavy outer bark has been hewed away by the
axe.

On pages 92-93, in the vicinity of Moricetown in Wit’suwit’en territory, the same Chinook-English blend is also the way to communicate with local people about retrieving a lost packhorse:

Calling the men of the village around me, I explained
in Pigeon-English and worse Chinook that I had lost a
horse, and that I would give five dollars to the man who
would bring him to me. They all listened attentively,
filled with joy at a chance to earn so much money. At
last the chief man of the village, a very good-looking
fellow of twenty-five or thirty, said to me : ” All light,
me go, me fetch urn. You stop here. Mebbe-so,
klip-sun, I come bling horse.”

Long before sunset an Indian came up to us and
smilingly said, “You hoss come.” And a few min-
utes later the young ty-ee came riding into town leading
” Major Grunt,” well as ever, but a little sullen. He
had taken the back trail till he came to a narrow and
insecure bridge. There he had turned up the stream,
going deeper and deeper into the “stick,” as the Siwash
called the forest. I paid the reward gladly, and Major
took his place among the other horses with no sign of
joy.

Page 109 has the group reaching the Kispiox area in Gitxsan territory, and true to some generalizations we’ve been building up through the years, here the Jargon was of less use:

We unpacked near an Indian ranch belonging to an
old man and his wife, who came up at once to see us.
They were good-looking, rugged old souls, like powerful
Japanese. They could not speak Chinook, and we
could not get much out of them.

On page 112 — heading down the Skeena River? — the group encounters a man who speaks some Jargon; is it any coincidence that he’s active in the fur trade?

During the day we met an old man so loaded down
I could not tell whether he was man, woman, or
beast. A sort of cap or wide cloth band went across
his head, concealing his forehead. His huge pack
loomed over his shoulders, and as he walked, using two
paddles as canes, he seemed some anomalous four-footed
beast of burden.

As he saw us he threw off his pack to rest and stood
erect, a sturdy man of sixty, with short bristling hair
framing a kindly resolute face. He was very light-
hearted. He shook hands with me, saying, ” Kla-how-
ya,” in answer to my, ” Kla-how-ya six,” which is
to say, ” How are you, friend ? ” He smiled, pointed
to his pack, and said, ” Hy-u skin.” His season had been
successful and he was going now to sell his catch.

And on page 113, another Tsimshian family who are said to have little acquaintance with the Jargon, but who use a sign-language-type gesture with exactly the CJ word we so often find associated with that strategy:

A few miles farther on we met another family, two
men, a woman, a boy, and six dogs, all laden in propor-
tion. They were all handsomer than the Siwashes of
the Fraser River. They came from the head-waters
of the Nasse, they said. They could speak but little
Chinook and no English at all. When I asked in Chi-
nook, ” How far is it to feed for our horses ? ” the
woman looked first at our thin animals, then at us,
and shook her head sorrowfully ; then lifting her hands
in the most dramatic gesture she half whispered, ” Si-ah,
si-ah ! ” That is to say, ” Far, very far ! “

On page 122, even farther down the Skeena at the Native village of “Kuldo”, the people again are unfamiliar with Jargon as well as with whatever conventionalized hand gestures the prospectors are trying to use:

Here they dwell by this rushing river in the midst of
a gloomy and trackless forest, far removed from any
other people of any sort. They were but a handful of
human souls. As they spoke little Chinook and almost
no English, it was difficult to converse with them.
They had lost the sign language or seemed not to use it.

On page 166, not in quoted Jargon but meant as scene-appropriate, describes one of Garland’s fellow travelers who, having “stripped to the undershirt, sat in the bow to pull at the paddle ‘all same Siwash.’ ” [like an Indian]

Page 199, at Wrangell, Alaska — a presumably Lingít (Tlingit) woman advises the author of where to get feed for his horse:

As I watched Ladrone at his feed an old Indian
woman came along and smiled with amiable interest.
At last she said, pointing to the other side of the village,
” Over there muck-a-muck, hy-u muck-a-muck.” She
wished to see the horse eating the best grass there was
to be had on the island.

The overall picture painted by Garland of his experience of Chinuk Wawa use — pretty vibrant in interior BC, and merging with pidgin English as you go north, becoming scarce in Tsimshian country, then again in currency in southeast Alaska — matches really well with everything I’ve found in years of research.

← Another ad in Chinook Jargon, 1902! And its connection with “Klondyke”…
Voyageur French things that made me think of Chinuk Wawa, and think again →