Picking up a trail I’ve merely pointed at before…

What’s the deal with the minor folklore that English “hike” is from Chinuk Wawa (h)áyáq ‘fast; soon; hurry’?

I’m always excited, of course, when someone mentions Chinook (Jargon) in public, so I dug a little further.

What I found was exactly one earlier, but titanically influential, author having proposed the CJ connection with “hike”:

Dickson, then, is uncritically repeating Mencken’s speculation, minus the Sage of Baltimore‘s sober bet-hedging.

It seems the earliest occurrence of this etymological idea, and thus the source for Mencken’s careful hypothesis, was an author I’ve blogged about before. Here it’s horses, of all things, being talked to in Jargon:

But Mencken doesn’t cite this book, thus causing a bump in the trail. However, he does mention two other books (including “Rose of Dutcher’s Coolly“) by Hamlin Garland. The latter work definitely doesn’t produce any references to Chinook Jargon, but it’s clear Mencken was familiar with this author’s works.

So I believe we can credit Garland with originating the idea that “hike” is from hyak. His use of it in Jargon-speaking British Columbia, telling horses to get a move on, makes that connection understandable and to some extent plausible.

Besides, “hiking” in nature is such an integral feature of life in the modern West that we could easily assume it’s always been this way.

But I can’t resist spoiling the fun of all this — there’s a surprise twist in this story.

As a responsible linguist, the spoiler I’m laying on you is this: the verb “hike” (and earlier “yike”) goes slightly farther back in documented history than we’ve known of Chinuk Wawa. And it originated in England, with no connection to the Pacific Northwest, except that Garland’s Canadian horses were British subjects.

In fairness, “hike” had a slangy and/or contemptuous sense (like “get the hell out of here”) for its first decades. Chinook Jargon, too, was often linked in the popular imagination with slang, cussing, and general low life. I can imagine how people could associate the two.

When I went searching, it appeared impossible to find “hike” or “hiking” in American newspapers and books before 1900. My earliest find was in a 1912 Chicago newspaper, and maybe it’s no coincidence that it’s used in a way that jokily references Indians: 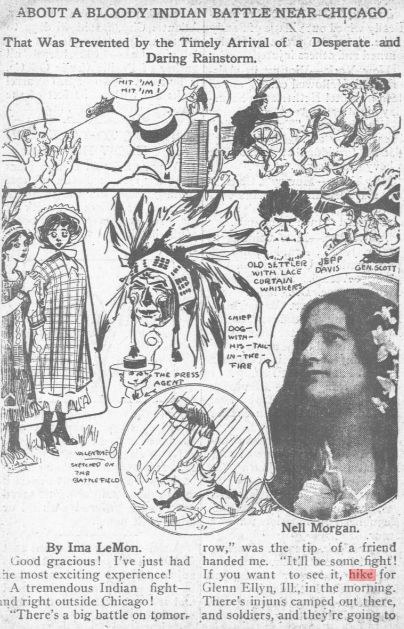 Interestingly, this Day Book newspaper looks like the publication that popularized “hike”. So, it’s Illinois and not the Pacific NW that accounts for something like the first dozen printed occurrences of the word in America that I’ve found. Someone at that paper really liked the sound of this word! (Yes, it’s sometimes put in quotation marks at first, to show it’s an unusual expression.)

Anyway, I can see how “hike” might have felt kind of foreign-and-maybe-Chinook-y in Garland’s and Mencken’s times…

But for the word to have any genuine Chinuk Wawa basis, Hamlin Garland’s book of BC memories would have to have been much more influential than the evidence shows.

So we can credit Garland with the idea, but bust his myth at the same time.

(And I haven’t even bothered pointing out that “hike” and < hyak > / < hyack > / (h)áyáq sound very different. Nowhere in the Chinuk Wawa documentation is there a hint of a pronunciation like “hike”.)

← 1882: Trying to argue in Jargon for assimilation, with Indians you’re interviewing
Johnny Skuzzy, Catholic outcast in Lytton, BC →

One thought on “Crazy etymology claim: “hike” is from Chinook Jargon!”