There’s a rule of thumb we use when documenting a language: get the speaker to talk about a near-death experience.  The reason for doing this is that you get the least filtered, most natural speech when you can get someone emotionally involved in what they’re discussing.

In the Kamloops Wawa newspaper, I see Father Le Jeune’s particular style of Chinook Jargon as a bit of a literary register-in-the-making.  He writes plenty of stuff that differs in its grammar from the “street Chinook” that his Indian friends were putting into the letters they wrote, and sometimes he uses words that are really known only in the Jargon of other regions.   In this way, the Aboriginal people succeeded wildly at exactly what the shorthand alphabet was made for — writing just as you hear and say things.  That purpose is discussed in issue #69 of 12 March 1893, pages 41-42 under a heading “Chronique Sténographique” (Le Jeune could’ve titled the article in cuneiform for all it would’ve been intelligible to his readers).

The padre was sometimes equally successful, though, at writing what he felt.  We know from people who spent time around him, and from the historical record, that he had a touchy stomach and often was unable to eat much.  So when he throws in an article titled “Dyspepsia” (same issue, pages 43 and 44), we can expect some juicy Chinook, and he doesn’t disappoint.

Take a gander at the vivid expressions (like “sick heavy”), colloquial pronunciations (“boil soman”), and the nonstandard Chinuk Wawa word choices that exemplify his street Chinook at its best — as people really spoke (and thought!) around Kamloops in 1893.  This was a rapidly evolving language, a microcosm of the sociolinguistic truth that every language is constantly experiencing change. 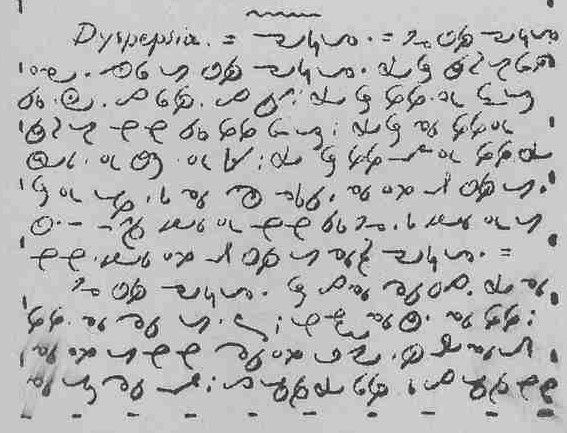 = Dyspepsia. = What is this dyspepsia?
Dyspepsia is a very strange illness.  If a person stays
at home, doesn’t eat, doesn’t go anywhere: if a person takes a lot of medicines,
always thinks about taking medicine: if a person drinks a lot
of whiskey, a lot of wine, a lot of beer: if a person eats a great deal of food[,] if
a person smokes a lot, and he chews tobacco, he will soon get this sickness.
Also people who think too much about things, and who are often un-
happy, will soon get this disease called dyspepsia.  =

What is this dyspepsia like?  A person can’t work up an appetite.  If he
eats, he gets sick heavy: sometimes he throws up his food:
he easily gets upset [and] is easily angered.  He doesn’t sleep well[.]
His skin gets dry: [He’s] not strong [enough] to work and not strong of mind.

That’s what this dyspepsia is like.  Maybe not very many people
are sick with it, but I think a lot of women get
this kind of sickness.

It’s not by taking a lot of medicine that a person recovers from this disease[,]
it’s only if he pays attention to his food and his work.  If
a person is sick with this illness, his stomach isn’t strong, so
he can’t eat any old thing.  He can’t eat
fresh-baked bread, pork, cakes, a variety of meats, salt meat,
fried fish, boiled salmon, salad, lettuce[,] nuts[,] radishes.
All of these foods make his sickness get more acute.

If he eats rice, oatmeal, barley, warm milk[,]
soft-cooked eggs, mutton, well-cooked apples[,]
he will be fine. = Also if traveling, travel by foot, travel on
horseback.  Work[:] cut wood, do whatever tasks are mildly strenuous
work.  All of this is like medicine for an illness like this.

Better yet if a person is sick with this disease, [to]
wash his body, his shirt and all his undergarments[,]
to keep changing the clothes that touch
his body.  If he does so, [he] won’t readily get sick.
Doing all of these things is the same as medicine.

← Delirium tremens in the Okanagan
Public service announcement: “alki” is not the future tense →