A document of Grand Ronde’s past that I thought was just a rumour, or was lost, has turned up, thanks to Prof. Peter Bakker.

One of the archival items described in it is a manuscript Chinuk Wawa dictionary and religious texts by the Oblate Catholic missionary Honoré-Timothée Lempfrit or Lampfrit (1803-1862), dated 1849 by him.

I had earlier read the published “Oregon Trail Journal” of Lempfrit (ed. Patricia White; Fairfield, WA: Ye Galleon, 1985), but had found no solid clues there to the existence of organized notes he might have made on the Jargon.

Prévost’s paper, though, specified the archival record number to look for, and it was then a matter of minutes’ work on the BNF website to find and download Lempfrit’s frontier-era Oregon Country and BC document.

Coming from that time and place, this is a find that has the potential to bring us new insights into fur-trade era CW, and into the speech that was current when the important Grand Ronde reservation community was founded.

Lempfrit arrived at his initial Pacific Northwest destination near Olympia in late 1848, and in mid-1849 accompanied Sir James Douglas to the new colony of Vancouver Island.

He remained at the latter place just two years, being then posted to California for a year before (it’s rumored) some of his misbehavior on Vancouver Island led to his being dismissed and going home to France.

So we understand that Lempfrit wasn’t in the PNW for terribly long. He was put in charge of ministering to many and varied Indigenous tribes, though, so it seems he must have learned fairly good Chinuk Wawa. In addition, he worked with known superb CW users including Fathers Demers, Blanchet, and Lionnet.

Today I begin a mini-series looking at this newly “discovered” Jargon treasure. Here’s the title page of it: 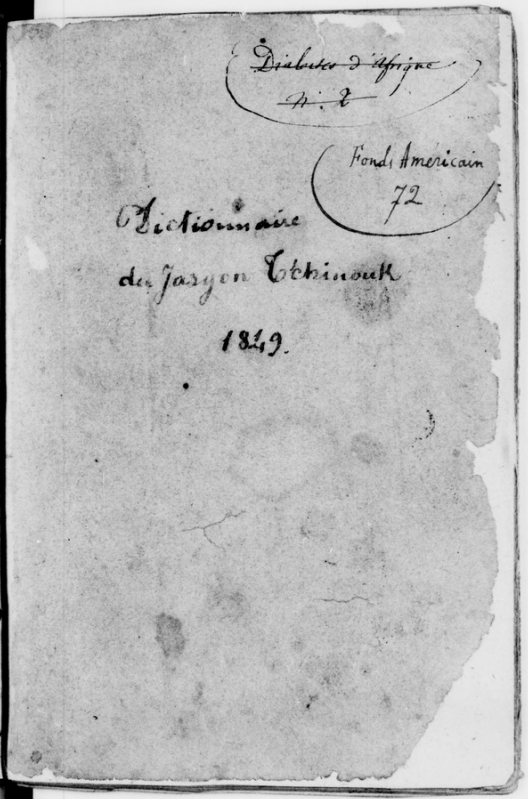 We’ll be seeing some definite influence from those earlier-arrived Oblate documentors in the following pages.

It’s going to be a fascinating question to figure out how much of Lempfrit’s own new and original observations will emerge…so stay tuned!