Why ípsət is NOT from Salish

An etymological idea that we can shoot down… 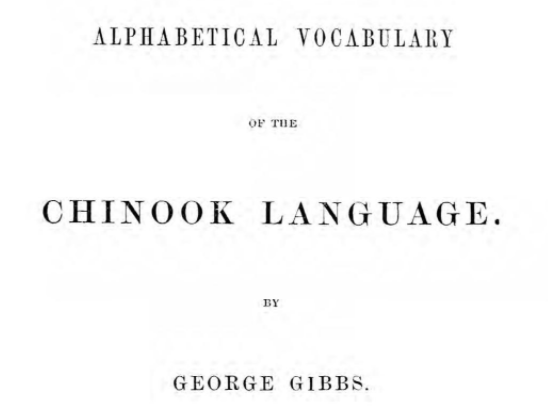 …And mind you, I’m the only person who ever suggested it in the first place 🙂

This is reported in excellent detail by the 2012 Grand Ronde Tribes dictionary. The word as we know it in CW is “apparently, a simple imperative with i- (transitive third-person masculine object) + [-]pšut ‘hide’ “.

That seems convincing to me. In Shoalwater-Clatsop Lower Chinookan, for instance, imperative verb forms are like English — they have no expressed subject (Franz Boas, “Chinook: An Illustrative Sketch”, 1910:590, 650, 672). On the other hand, no source is indicated for the above form or analysis in Chinookan, so I did go looking for forms translated as ‘hid’, ‘hidden’, ‘hide’, or ‘hiding’.

For SCLC, I found Boas’s view that the root is actually (putting it in the same phonetic alphabet as the above) -pš, as in a-g-a-x-ú-pš-am ‘she hid her own’ (1910:587). This implies that his listed stem for ‘to hide’ on page 660 of the same publication should be segmented with an additional dash, which I here put in brackets: -ú-pš[-]ut. But Boas doesn’t show us any example words using this form!

So I turned to Boas’s “Chinook Texts” (1894) in the same language. That study does in fact show us more words having the longer [-ut] form…

…than of the shorter form…

…and maybe those two are underlyingly [-]pšút[-]lit for all I know. In any event, the longer root shape seems to be the more common in SCLC.

But nowhere in the documentation of this Chinookan language do I find a form as simple as ípsət. Nor do I find it in Boas’s “Kathlamet Texts” (1901). All that I could establish from that study is that Kathlamet Lower Chinookan always seems to use just the [-]pšut form of the stem.

In Upper Chinookan, Clackamas appears to use a different root, something like -q’wayt; I found no other roots being used for the concept. And Kiksht (“Wishram”) uses still other roots, including -x̣utk (although I found just a couple of occurrences of the root -psut, which I’m guessing could be due to Chinuk Wawa or Lower Chinookan influence). I still don’t find anything like ípsət, in Upper Chinookan.

What I take away from all this is that:

(A) the root -psut/-pšut is specifically a Lower Chinookan morpheme, as are most CW items from Chinookan languages, and

Unless of course you remember to look at George Gibbs’s often overlooked published “Alphabetical Vocabulary of the Chinook Language” (not Jargon; 1863).

Because it’s there and only there that I’m finding < ip-sut > for ‘to hide’ (alongside the related < al-húp-so >.) Gibbs specifies that the words he shows are from “the Chinook proper and the Clatsop, and probably also of the Wa[h]kiakum” (page [iii]).

As an authority on Chinuk Wawa, I assume Gibbs would leave out any words that Lower Chinookans provided to him in his research, if he felt the speakers were lapsing into CW. On the other hand, there are several pretty clear exceptions to this generalization, and it’s possible his < ip-sut > fails to resolve our quest for a documented source form within Chinookan for the CW term.

I’ll have to write a separate post about Gibbs’s Chinookan dictionary.

So far, we’ve found the one possible Chinookan authority to cite for the specific inflected form ípsət.

The form of the CW word ípsət is fairly reminiscent of general Salish “reflexive” verb forms. Across almost all of Salish, a suffix looking like -cut or -sət creates these forms.

But I feel we can easily disprove any idea of this word being from Salish, based on a couple of points:

There, that was easy. I hope we’ve all learned a little something today…