Salish ‘mind’ as a discovery in Chinuk Wawa

Every so often, my digging in the mountains of BC Chinuk Pipa (or “shorthand”) Chinuk Wawa writing turns up a new word. 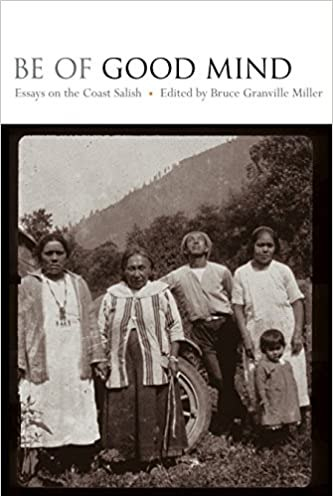 Here, for your curiosity and mental exercise, is one such.

I’ve transcribed this Jargon passage into an English-style Roman alphabet, since I haven’t yet taught you all how to read Chinuk Pipa…

klaska chako wawa kopa ShK: iht kopa klaska, iaka aias
‘they came to talk to Jesus: one among them, who really’

pi iaka wawa: “Taii, klaksta ilip wawa kopa kanawi wawa
‘and he asked: “Lord, who [SIC] is the first saying among all sayings’

mitlait kopa lo?” Pi ShK wawa kopa iaka: “Pus maika tiki
‘that are in the law?” And Jesus replied to him: “That you love’

maika silli, pi kopa kanawi maika skulkwiliol … ” ‘
‘your spirit, and with all your mind…” ‘

For me, that < skulkwiliol > looked at first glance like two Chinook Jargon words, < skul > ‘school; to study’ and < kuli > ‘to travel, wander’, plus either CJ < ol > ‘old’ or a seeming recent borrowing of English ‘go‘.

But it’s actually a Salish word < skulkwiliol >, /sqʷəlqʷéləwəl/. This is literally ‘words/talk in the inside, words/talk inside the head’, according to Brent Galloway’s elder-speaker-informed Stó:lõ dictionary. It’s the commonly used word that corresponds to Chinuk Wawa tə́mtəm, < tomtom > in Chinuk Pipa spelling; I infer that the writer, here Father JMR Le Jeune of Kamloops, is reaching for a suitably dignified-sounding expression of Jesus’ idea. Because the Kamloops Wawa newspaper was read by speakers of at least 8 Salish languages, he may have figured that his audience would easily grasp what was meant.

For the meaning of this word as used in Chinuk Wawa, compare the final word in an English-language version of Matthew 22:37: “He replied, “You must love the Lord your God with all your heart, with all your being, and with all your mind.”

Interestingly, the word occurs with its root reduplicated (that’s the < kul > part), showing that it’s a pidgin singular use of what I take as a Salish plural ‘minds’! We know it’s singular in CW because Jesus is telling the Pharisee about ‘your heart and your spirit’, etc., using the singular ‘you’, < maika >.

The final consonant, being apparently /l/, shows the Stó:lõ (Upriver Halkomelem) source, spelled sqwelqwálewel, because other Salish languages would have /n/ here.

I should specify that, even after a good deal of searching, I haven’t yet found this inflected form of the noun for ‘mind’ in Galloway’s dictionary, so this may be a minor Stó:lõ linguistic discovery as well.

You can certainly add this word to the substantial pattern of inland BC’s Kamloops Chinuk Wawa using Coast Salish spiritual terminology. Commonly occurring examples include < silli > ‘soul’ in the above paragraph, < styuil > ‘pray(er)’, < piyusim > ‘(make) the sign of the cross’, and < haha milalam > ‘confession’.

The reason for this remarkable subset of the vocabulary coming from the coast is that the Oblate Catholic missionary priests’ headquarters were on the lower Fraser River. Their earliest sustained work among tribes occurred in that vicinity (I include Tulalip, Washington in this view), where several Coast Salish languages are traditionally spoken. And new priests, like Father Le Jeune, were typically first trained among those tribes before being sent inland.

One thought on “Salish ‘mind’ as a discovery in Chinuk Wawa”