Spokane Romance in New Novel: A pair of discoveries! 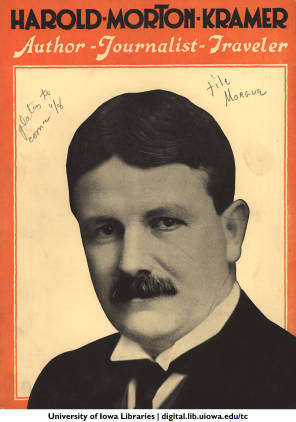 It all started when I came across this in an old issue of a local paper:

That the Inland Empire is as rich in that delightful something, generally referred to as “the atmosphere of romance,” as is the sunny south or any other part of the country, is demonstrated in a novel, called “The Chrysalis,” by Harold Morton Kramer [1873-1930], one of the galaxy of Indiana novelists, to be issued in April. While the principal scenes are laid in Spokane, the Palouse and Big Bend districts and the northeastern parts of Washington and Idaho receive much attention. The publishers believe it will be dramatized and played by metropolitan and road companies.

Mr. Kramer wrote this story from personal knowledge of Spokane and the Inland Empire, haing spent several years here in newspaper work and in “roughing it” in the early ’90s, and he has injected red blood and warm life into every page of this stirring narrative of the northwest. This acquaintance he foreshadows in his foreword, or “Tenas Wauwau,” which the old guard of the Palouse will recognize as a bit of Chinook jargon, meaning “a little talk.”

Spokane is the first city in the northwest to be given special recognition by a novelist, and if the book meets with the sale the publishers predict for it, the city and country will profit by the resultant widespread advertising.

If the book goes to the stage, the entire country will be given a glimpse of life as it really exists today in the Spokane country —hospitable, warm hearted, intelligent, progressive, healthful —a stage picture of a rich district no longer given over to the cowboy and the free and easy rancher, though retaining the picturesqueness of these hardy conquerors, and showing true to life that warm tinge of romance which is one of the charms of this region, and which appeals to the heart of every American, no matter where his lot may be cast.

When I went looking for more information about this onetime late-frontier Northwesterner, I found something even more interesting:

He Wanted to Trade, Not Kill

How many are there interested in languages who know that the first “universal language” ever brought into existence was originated on the Northwestern frontier? Harold Morton Kramer, the novelist and lecturer, who is an I. L. A. enthusiast, by the way, tells something of this language, or, rather, jargon, in his novel, “The Chrysalis.” He knows the jargon and its history, and there is something of interest in the story of how he chanced to become so well versed in it.

Mr. Kramer spent some years in the Northwest, where he roughed it at times with the cowboys and others who made up what was the frontier twenty years ago, and there he first heard of the “Chinook jargon.” This jargon was devised by the old Hudson Bay Company many years ago for use as a trade language at their posts on the far frontier. There were so many different nationalities and so many different tribes of Indians, each speaking a different tongue that some sort of a universal language was necessary, and the “Chinook jargon” was the outcome of this necessity. The Indians of the Northwest still use it.

One day not many months after Kramer had arrived in the “Big Bend Country” in Washington he was making a long ride across the plains, unaccompanied. While far out into this uninhabited region he suddenly came face to face with an Indian. The Indian was mounted on a jaded looking cayuse pony and was armed with a Winchester rifle, while Kramer had a six shooter swung at his hip. The Indian was a villainous looking scamp, and halted Kramer and began to grunt out short sentences in the Chinook. All the novelist could make out was that the redskin was saying something about the white man’s horse, and from the way the Indian fingered the lock of his Winchester, Kramer had serious misgivings as to what the result of the meeting would be.

Kramer tried to end the confab by riding on, but the Indian managed seemingly without touching his reins, to place his horse squarely in front of the white man each time an effort was made to end the discussion. This occurred several times, and finally Kramer jerked out his six shooter and spoke the only two Chinook words he knew:

The Indian looked surprised, then scowled, and finally with a grin wheeled his horse and dashed away. Kramer says he dashed the other direction faster than the Indian was traveling.

When he reached a settlement and told of his experience and repeated as best as he could some of the Indian’s jargon words the ranchers laughed and stated that it was evident that the Indian was only wanting to trade horses, and probably would have given his rifle to boot. Kramer vowed that day that he would master the Chinook jargon so he would know whether to expect a fight or a frolic the next time he met an Indian. He applied himself and soon could speak the jargon fluently.

If you would gather a faint idea of this peculiar jargon perhaps you will be interested in seeing the Lord’s prayer given in it. Here it is as frequently recited by Mr. Kramer for the benefit of those who take an interest in these linguistic oddities:

It will be observed that a jargon word may mean a great variety of things, depending entirely upon its relation to other words and the sentence in which it is used. Note, for instance, the word “kopa” in this prayer. One of the oddest letters Mr. Kramer ever received came to him from Mr. George C. Shaw, 115 Thirty-second Avenue, Seattle, soon after the publication of Mr. Kramer’s novel of the Northwest, “The Chrysalis.” Just read this letter, some of you lyceumists:

“How do you do, friend? How are you? Where do you live? The “Chrysalis” is magnificent. You understand the Northwest.”

The letter was addressed to Mr. Kramer in care of his publishers, who forwarded it to him.

In his platform work Mr. Kramer is frequently called upon to recite bits of jargon for the amusement of those who know something of his experiences in the Northwest.

I’m surprised. Shaw’s letter (aside from the < nika > misprint for < mika > ) is not terribly fluent nor clear.

Mind you, it was written the same year Shaw’s well-known dictionary was published, so it’s unlikely he was simply rusty at speaking the lingo. Yet there are real problems:

I still hold out hope that Shaw did a fair job of documenting Chinuk Wawa, even if he himself couldn’t speak it wonderfully.

So much for Shaw, I guess. Now, we’ve seen virtually nothing of Kramer’s own Jargon; it’s unclear just how fluent he was. If he was on the Palouse in the 1890’s, he could’ve indeed had some exposure to Chinuk Wawa, as it was still known by some older Native people and early pioneers, although the rapid transition to a heavily White majority meant English was steadily crowding out CW.

Luckily we can read “The Chrysalis” for free online, so I went skimming through it to get a sense of the author’s acquaintance with the lingo, albeit in fictional utterances.

As noted in the newspaper article above, the introduction briefly discusses the Jargon, but it doesn’t really show any evidence of K’s skill with it.

Page 50, while good fun, is not revealing either. A cowboy character (I think), named Dan, slyly works a well-known naughty Pacific Northwest folk song (see “Chinook Jargon Songs, Part 1“) into a barroom conversation about his plans to find a wife sometime soon. This might, by the way, be a previously unknown version of the song, but it’s pretty certainly one that was heard, not concocted, by Kramer, and therefore really valuable to us:

The thing is, even though Dan’s been cautious about anybody near him hearing the song (which is about a famous whorehouse), on the following page his diffidence goes unexplained as he merely says it means he’s going to sleep well at the end of the work day! So I’m supposing Kramer didn’t quite grasp the meaning of the ditty, even if he realized that it wasn’t sung in mixed company.

Pages 93-98 and following feature a Settler character attempting to understand the Jargon of an Indigenous man he’s caught trying to steal his horse:

None of the preceding passage is complicated enough to be called fluent. Most of it could’ve been constructed by just looking into a Chinook Jargon dictionary. Since < Wake kiuatan > isn’t even grammatical, I strongly lean towards this guess. For gosh sakes, the white guy is more familiar with football cheers (which in the PNW often used bits of Chinuk Wawa) than with the actual language…

By pages 217-218, my sense that Kramer didn’t really speak Jargon is solidifying. He’s got a frontiersman telling an anecdote of a conversation that led to a shooting, but there’s no substance to the couple of words that are quoted — and worse, Kramer takes up some common mispronunciations by English-speakers of Jargon greetings:

That’s about all the clues we get. Page 419 is a very short Glossary that adds no depth to the picture of the author’s grasp of Chinook.

So my conclusion is that Kramer didn’t speak (or at least remember) Chinuk Wawa very well. I’ll cap that thought off with a note that his spellings of Jargon are conventional, straight out of other people’s publications.

But the letter he received from George Shaw does indeed tell us something new, and kind of surprising. It looks as if if Shaw, although the author of a popular Jargon dictionary, wasn’t a very good speaker of it either!

And we can give Kramer a hearty thanks for evidently documenting a previously not-written-down oral variant of one of the most famous of the (few) distinctly PNW folk songs!