The Passing of a Race 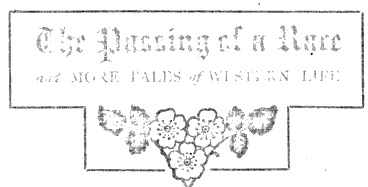 “The Passing of a Race: And More Tales of Western Life”

This is a collection of stories based on the author’s actual experiences on “the Pacific Coast forty or fifty years ago” (page [6]). Those were colonial days when a guy like this would spell “jail” as “gaol”. My summary sense of the book is that the race that was passing was the entire frontier-era society, rather than the ever-popular vanishing Indians. Whew.

I’ll only excerpt these tales, of course, for their Chinook-related value. Higgins’ command of Jargon may never have been stellar, and old memories can be elusive things. The result is maybe a coffeecup’s worth of blog for today 🙂

“Captain John”, the “King of the Hydahs” (Haida Indians),

always claimed to have been born in Alaska. He could read and write English a little, and his language was a puzzling maze of Russian, English, Chinook and Indian. With the aid of pantomimic gestures and broken words he managed to make himself understood.  (page 11)

In the following quote, do you think a word for liquor has been accidentally dropped? Or was hiyou (‘a lot’) a local word–maybe just as a borrowing into English–for a drunken bash? (Recall that hi(-)yu is still the name of a couple of Pacific Northwest public festivals.)

On one occasion, in the summer of 1860, the Hydah youths became very restless. They had imbibed “hiyou” (whiskey) and wanted to fight the whites. (page 12)

This picture sets the stage for what comes after: 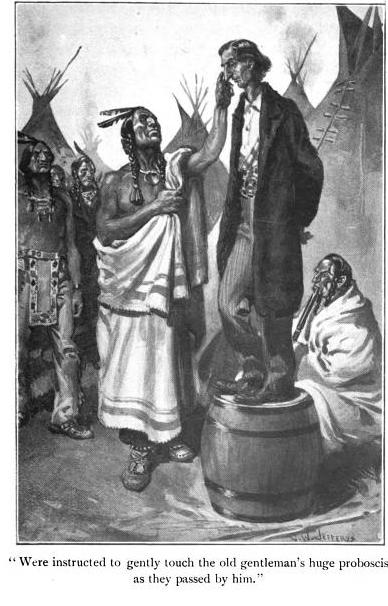 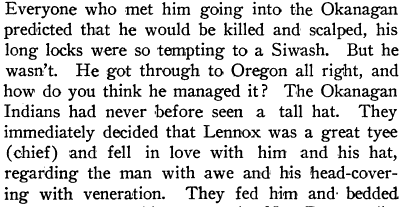 Everyone who met him [Dennis E. Lennox] going into the Okanagan predicted that he would be killed and scalped, his long locks were so tempting to a Siwash [Indian]. But he wasn’t. He got through to Oregon all right, and how do you think he managed it? The Okanagan Indians had never before seen a tall hat. They immediately decided that Lennox was a great tyee (chief) and fell in love with him and his hat, regarding the man with awe and his head-covering with veneration. (page 56)

This next bit, for its police humor (familiar to me from my late dad’s book of Alaska bush-cop tales), just happens to also document human rights violations: 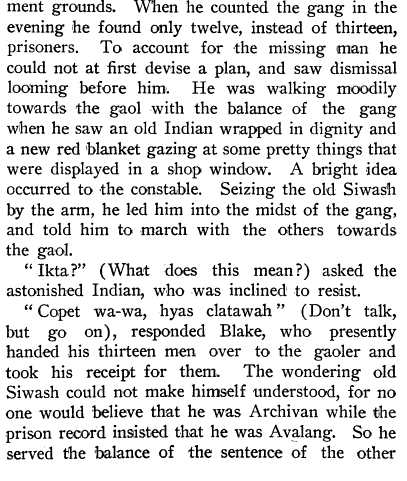 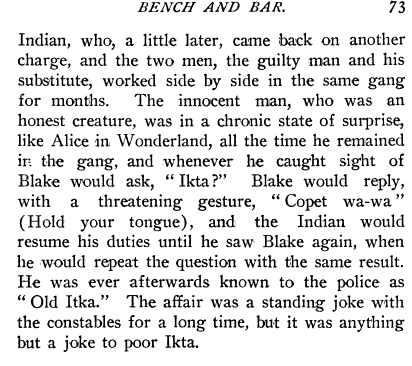 When he counted the gang in the evening he found only twelve, instead of thirteen, prisoners. To account for the missing man he could not at first devise a plan, and saw dismissal looming before him. He was walking moodily towards the gaol with the balance of the gang when he saw an old Indian wrapped in dignity and a new red blanket gazing at some pretty things that were displayed in a shop window. A bright idea occurred to the constable. Seizing the old Siwash by the arm, he led him into the midst of the gang, and told him to march with the others towards the gaol.

“Ikta?” (What does this mean?) [literally ‘What?’] asked the astonished Indian, who was inclined to resist.

“Copet wa-wa, hyas clatawah” (Don’t talk, but go on) [literally ‘stop talking, big go’, but what was intended was hyak ‘fast, hurry’], responded Blake, who presently handed his thirteen men over to the gaoler and took his receipt for them. The wondering old Siwash could not make himself understood, for no one would believe that he was Archivan while the prison record insisted that he was Avalang. So he served the balance of the sentence of the other Indian, who, a little later, came back on another charge, and the two men, the guilty man and his substitute, worked side by side in the same gang for months. The innocent man, who was an honest creature, was in a chronic state of surprise, like Alice in Wonderland, all the time he remained in the gang, and whenever he caught sight of Blake would ask, “Ikta?” Blake would reply, with a threatening gesture, “Copet wa-wa” (Hold your tongue), and the Indian would resume his duties until he saw Blake again, when he would repeat the question with the same result. He was ever afterwards known to the police as “Old Itka” [sic, actually Chinuk Wawa]. The affair was a standing joke with the constables for a long time, but it was anything but a joke to poor Ikta.  (pages 72-73; this occurred in 1861)

Here’s another indication of Jargon osmosing into local English, whether the Indian hostler actually said it this way or Higgins is just going for local color: 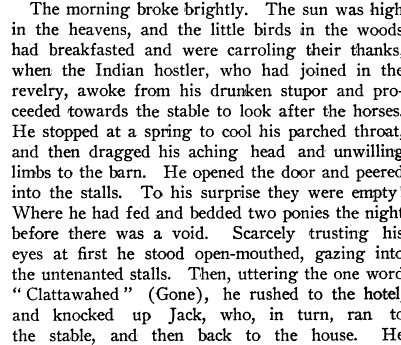 The sun was high in the heavens, and the little birds in the woods had breakfasted and were carroling [sic] their thanks, when the Indian hostler, who had joined in the revelry, awoke from his drunken stupor and proceeded towards the stable to look after the horses. He stopped at a spring to cool his parched throat, and then dragged his aching head and unwilling limbs to the barn. He opened the door and peered into the stalls. To his surprise they were empty! Where he had fed and bedded two ponies the night before there was a void. Scarcely trusting his eyes at first he stood open-mouthed, gazing into the untenanted stalls. Then, uttering the one word “Clattawahed” (Gone), he rushed to the hotel, and knocked up Jack*, who, in turn, ran to the stable, and then back to the house. (page 99)

*Jack is the famous Gassy Jack Deighton, for whom this book elsewhere tells Gasstown/Gastown (which I’ve been told is the old Chinook Jargon name of Vancouver, BC) was named.

The most interesting thing about this next scrap…aside from sharing an unusual spelling with an Edmonds, Washington swim & tennis club…

…is that it suggests Jargon, a quintessentially colloquial language, as pidgins are, was useful in drinking establishments (as it was in stores, viz. “halo jawbone“): 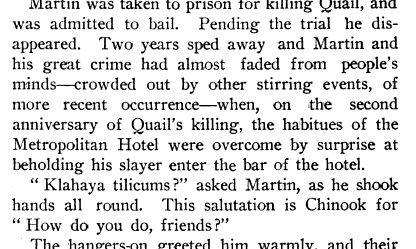 Martin was taken to prison for killing Quail, and was admitted to bail. Pending the trial he disappeared. Two years sped away and Martin and his great crime had almost faded from people’s minds—crowded out by other stirring events, of more recent occurrence—when, on the second anniversary of Quail’s killing, the habitues of the Metropolitan Hotel were overcome by surprise at beholding his slayer enter the bar of the hotel.

“Klahaya tilicums?” asked Martin, as he shook hands all round. This salutation is Chinook for “How do you do, friends?” [hello friends] (page 252)

← Honey, a latecomer in the Northwest
Carmack of the Klondike →