Impressions of a Tenderfoot: During a Journey in Search of Sport in the Far West

“Impressions of a Tenderfoot: During a Journey in Search of Sport in the Far West” by Mrs. Algernon St. Maur (London: John Murray, 1890).  It’s said that this was quite a popular book in its day. 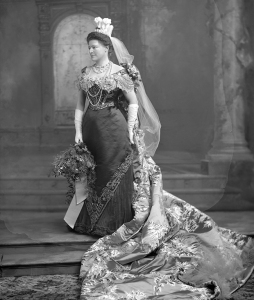 This is yet another publication where we find the Kootenays portrayed as a place where — you’d hardly realize it from the better-known literature on the language — Chinook Jargon was really useful.

That linguistic picture is really consistent in the books and newspaper stories that I’ve found.  (Some of which involve Mr. Baillie-Grohmann, who plays a role also in the book I’m writing about today.)  For one of the most extensive and focused treatments, I’m duty-bound to refer you to an overlooked gem, if you can find a copy: Alexander Chamberlain’s old paper, “Notes on the Chinook Jargon as Spoken in the Kootenay District”.

Easier but less illuminating is to surf to a copy of the Duchess of Somerset’s book, where you’ll find a few tidbits.

From the start of her Far West sojourn, on Vancouver Island, Cowichan area:

Our Indians came in their dug-out canoes a long way
up-stream to join us here…Only two of them spoke English, and of that
only a few words.  All of them, however, chatter Chinook, a sort of jargon
originally used in trading with the Hudson’s Bay Com-
pany. Most Indians on the Pacific side of the Selkirk
Mountains speak this jargon (of which there are only
three hundred words) as well as their own language.

But the Duchess seems to have found it easier to communicate with these folks using English and by gesturing (page 87).  Across from Vancouver, presumably at the Skwxwú7mesh reserve, she and her husband rely on the help of a young boy who has some English (page 136).

On reaching the shore at 7 A.M.
yesterday, we saw the Indian’s canoe anchored on the other
side of the creek ; after much calling and whistling, our
Indian (William by name) came out of his house, and
through Algernon’s stalking-glass we saw him packing in all
haste, with the assistance of his “clootchman” (Chinook for
woman) ; at last he came, and we started.

— page 139 (the Duchess also refers to the lighthouse “on the other side of the entrance to Buzzards Inlet”, which I take as Burrard Inlet!)

William the guide is depicted as speaking a rather pidgin English:

…William tells us he is a Roman Catholic, but in his
simplicity thinks all belong to that Church. He says,
” Me no able to read, but my boy he learn ; he be able to
do all that.”

Same locale: an expression that’s new to me:

We started with what the Indian called a “siwash” wind.
Our canoe sailed beautifully. The wind, however, soon
dropped, and so Algernon and the Indian had to do a long
day’s paddling.

In the Kootenays, a bilingual Chinook Jargon-English message:

Last night we were all awakened by the barking of
one of the dogs, but as he was always giving false alarms,
we shouted to him to keep quiet. Soon, however, we
heard some one outside saying, “Paper! letter! ” Alger-
non called Tom C , and they found an Indian who
had ridden up thirty-five miles during the night with a
letter. After an hour or two he took the answer back,
making seventy-five miles in all, in the dark, over a bad
trail part of the way — a good night’s work !

We find that one of the “cayeuses”
we bought is well known as a beast that always strays and
take others away with him. An unpleasant discovery !

— page 181 (the better-known spelling is cayuse)

And on page 185 the placename “Skookum-chuck (‘quick water’)” is mentioned.  It’s around this stage in the narrative that the Duchess lets on she has learned some Jargon:

We called the Indians, as I wanted to buy some of
their ornaments, and when they rode up to the house, we
gave them each some tobacco, and I purchased from
them an embroidered fire-bag, with a fringe of mink tails,
and a bead necklace strung on leather. The Indians
spoke to each other all the time, and I heard one of them
say in Chinook “that there were a lot of Clootchmans
(women) about.”

That’s about all the Chinooky stuff in this book.

You might appreciate knowing, when you read it, that Mrs St Maur seems to have illustrated it herself, and the landscape images are really top-notch.  I’ll leave you with one: 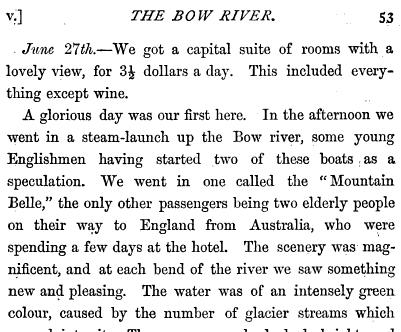 ← The Trottings of a Tenderfoot
Typos & Indian reserves in Chinook Jargon →

One thought on “Impressions of a Tenderfoot: During a Journey in Search of Sport in the Far West”