The Trottings of a Tenderfoot

“Trottings of a Tenderfoot: Or, a Visit to the Columbian Fiords” by Clive Phillipps Wolley (London: Richard Bentley and Son, 1884).

From the evidence, P-W was no master of the Jargon, but he recounts some of it in bright enough detail to add to our comprehension of the time and place.

Locals have a greater or lesser itch for various duck species (this is not be confused with the good ol’ Cultus Lake duck itch):

The ‘cultus‘ ducks, so called because they are unfit for food (‘cultus‘ in Chinook means worthless)… 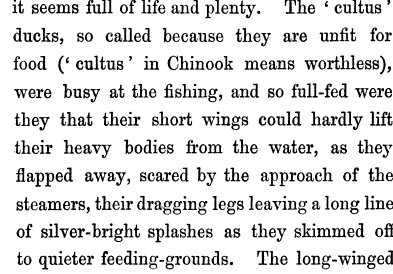 The cops on Vancouver Island are equipped with standard-issue Chinook Jargon:

At Comox…the policeman, ‘Joe Rodello,’…who speaks English, French, Chinook, and other varieties of the human tongue… 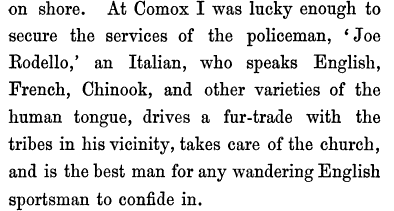 Some of his Jargon is overtly attributed to a published dictionary, but P-W’s notion that saiwash (‘Indian’) means ‘man’ is a howler of his own:

…semi-European garb…forming the costume of the filthy ‘saiwash‘ (man)…All spoke Chinook, a mongrel language, formerly introduced by the Hudson Bay traders, compounded of English and French grafted on some Indian stock. 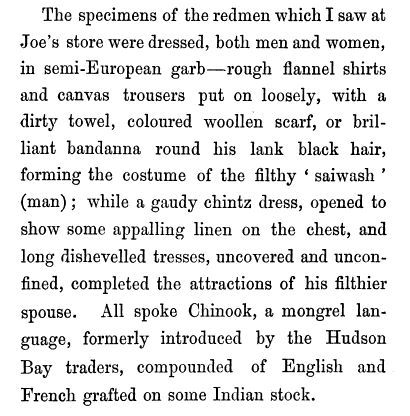 Paralleling, and probably kinda calquing, on white people’s disdainful use of siwash, P-W has Chinook  as a generic for Indigenous people:

…the filthiness of a Chinook… 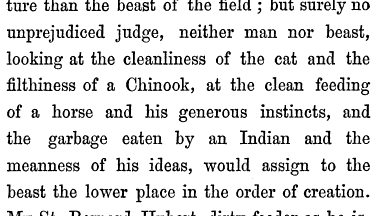 P-W makes a stronger argument than the usual that Chinook Jargon is a hotch-potch of onomatopoeia-squonomatopoeia, when it’s not the poetic jabbering & gesticulating of your average foreigner.  In the process he repeats his misunderstanding that siwash means ‘man’:

These are smoked clams for winter use, and make, I believe, excellent soup–‘skookum tumtum muckamuck,’ as my hosts called it in their queer jumble of different languages, which is called Chinook, was taught to these men by the Hudson Bay Company’s Indians, and is now in common use among all the coast tribes.  I did not much wonder at a ‘King-George’s-man‘ (Chinook for ‘white man’) calling any Indian food ‘muckamuck.’  It sounded right in my ears, at any rate.

Most of the Chinook words are slightly mispronounced English or French words, but I fancy that the original groundwork of the language is an Indian dialect.  Most of the names which the Chinook Indians use for things have, however, a very full share of descriptive power in them; as, for instance, ‘fever,’ which they call ‘cole sick, waum sick,’ and a seal, which is ‘siwash cosho,’ the man-pig [SIC!].  The names of birds seem borrowed from the notes of the birds themselves, at all events such as I have heard used amongst the men I met.  For instance, a mallard they called ‘kweh-kweh;’ and, on referring to a Chinook dictionary, I find that this and the names of geese and swans, at any rate, are the proper Chinook terms, and not mere sounds used to convey a meaning to my ears, untaught in Indian language. 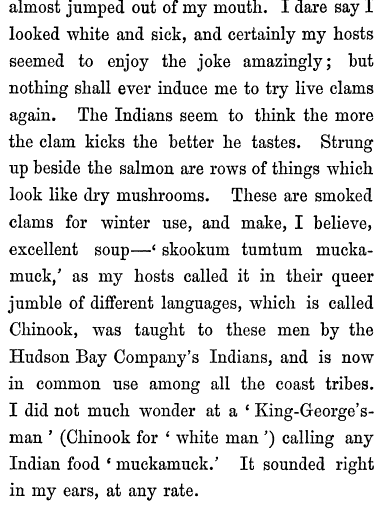 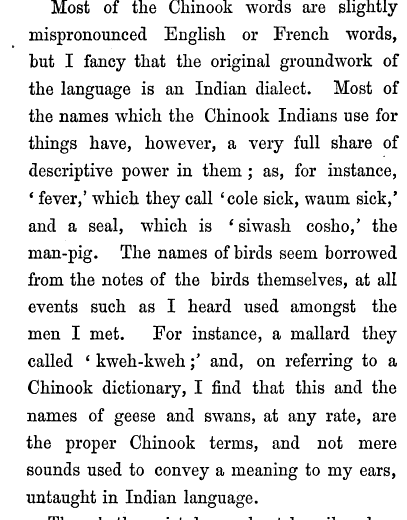 So, in a sober light, not a ton of new linguistic information is to be gathered from this fella’s book, but we can learn considerably here about people’s attitudes toward the Jargon and towards Indigenous people.

I part from you today with the tip that P-W used some Chinook Jargon in other published works, such as “The Chicamon Stone” (1900), “a novel that includes a heroic Tahltan named Siyah Joe who knows the secret location of gold on McDame Creek. (Chicamon means gold.)”  (Siyah = ‘far; long way’.)

← The Heroine of ’49, by Mary P. Sawtelle, MD
Impressions of a Tenderfoot: During a Journey in Search of Sport in the Far West →