Canoe “together”, an ancient Indigenous metaphor? 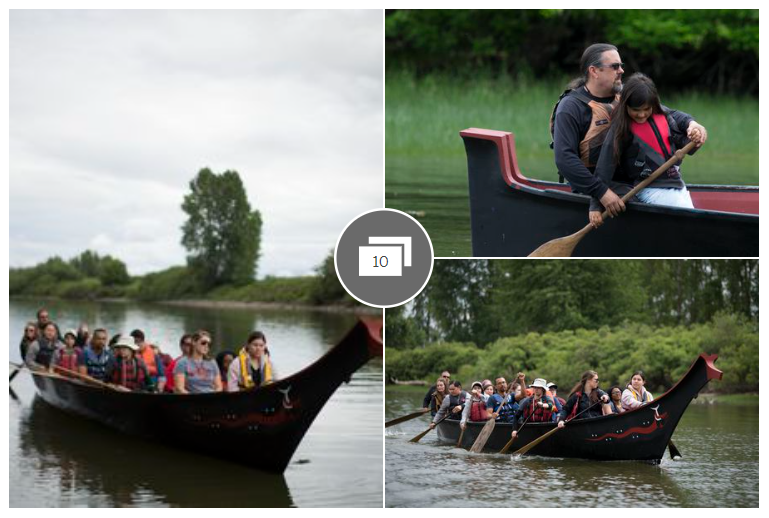 And incidentally, similar in form to Chinookan => CW kana[-]makst, we find Lower Chinookan kanəm[-]qwanəm ‘five together’:

I should specify that I represent the Chinookan root vocalism as schwas for a reason. I’m thinking of the known Shoalwater Bay Salish & Chinookan shift ə́ > í that’s used for expressive effect, thus kənə́m > kəním. Other examples of the same shift include CW kə́mtəks ‘to know; to remember’ > kímtəks ‘to miss someone’ (to remember them longingly).

You could go sideways if you investigated all the other Lower Chinookan roots for ‘together’, at least one of which resembles Lower Chehalis Salish:

Here you see instances of a root x̣uqč́ ~ x̣aqč́, closely resembling the frequent verb root in Lower Chehalis (which was often spoken by Lower Chinookans) x̣ʷúqʷ ‘gather; come together’ + perhaps the Lo.Ch. Reflexive verb suffix -cəš ~ č (this would be a perfectly grammatical Lo.Ch. verb, if we can infer that the suffix then underwent Chinookan Diminutive consonant mutation to  -č́).

Speaking of Salish, it’s interesting to me that Lower Chehalis ‘canoe’ wíɬ (Aert Kuipers 2002 reconstructs Proto-Salish root *wil and lexical suffix *-wil, both ‘canoe’) could be associated with Salish forms having perhaps related meanings. I’m thinking here of forms such as Proto-Salish *ʔuɬ-(t)xʷ ‘to enter’ (seemingly ‘together-Inchoative’, ‘(be)come together (with)’. The expected shapes in modern Lushootseed, a Coast Salish language, are two proclitics, gʷəɬ+ ‘of, belonging to’ and gʷəl+ ‘and’. Modern Thompson Salish, an Interior Salish language, has a root in the expected shape, ʔuy- ‘gather (together)’. And if memory serves, some modern Salish languages have a prefix ~ ʔuɬ- denoting groups of entities, i.e. ‘together’.

The evidence looks good to me for the proposed connection in Salish between ‘canoe’ and ‘together’.

And I think that this, in turn, lends support to an idea that Chinookan ‘canoe’ is from one and the same root as ‘together’. The implication is of a fairly sizable vessel requiring multiple rowers.

PS: Whether or not I’m on the right track in thinking of ‘canoe’ as an ancient Indigenous metaphor of people traveling together, it’s certain that each of the Native languages has multiple words reflecting types of canoes. These correlate with sizes, styles, geographic origins, and functions of various canoes.

For instance, a widespread Quileute (Washington coast) loanword ʔalotq in the Pacific Northwest denotes a very big oceangoing canoe. (I can’t help pointing out the resemblance to the ethnonym Alutiiq — the people of Kodiak island, Alaska — and the known historical ranging of “Aleut” (including Alutiiq) fur hunters during the Russian America era.)

Another word that got loaned around is q́ʷíʔ ‘shovelnose canoe’ from Southwest Washington Salish, found as far away as Alsea (Oregon coast) kʷíʔ ‘canoe’ … As I understand things, this would be a small, perhaps single-person, canoe.