Recalling 1854, an Anglican shows that Father Le Jeune of Kamloops wasn’t the only one who learned Chinuk Wawa in a hurry while traveling to North America:

Monday October 9 began to learn Chinook the patois employed in communication with the Indians in Vancouver Island by Captain [William Alexander] Mouat. He has an immense flow of natural humor.

This is possibly our first connection of Capt. Mouat — who served from 1844 to 1871 on many Hudsons Bay Company vessels, such as the Vancouver, the Cadboro, the Mary Dare, the Otter, the Labouchere — with Chinuk Wawa.

For me, at least, it’s a new realization that nautical captains played a significant role in increasing the number of Jargon speakers. But it makes sense. We know about Capt. Johan Jacobsen, who taught the illustrious Franz Boas. And those in charge of sailing vessels in the frontier Pacific Northwest certainly got around to many places where Native-Newcomer contact was so new that a pidgin language was the most effective way of communicating.

Because 1917 was still in the midst of World War 1, there’s also a letter in the same newspaper issue from a Winnipegger held as prisoner of war in Germany. This correspondent is trying to talk the local BC lingo but being censored by the Germans, who must’ve thought it was code, much as we’ve seen in a U.S. Civil War context: 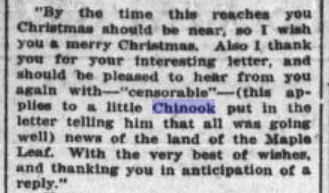 By the time this reaches you Christmas should be near, so I wish you a merry Christmas. Also I thank you for your interesting letter, and should be pleased to hear from you again with — “censorable” — (this applies to a little Chinook put in the letter telling him that all was going well) news of the land of the Maple Leaf. With the very best of wishes, and thanking you in anticipation of a reply.

More Chinook code talk, not in the US Civil War for once!