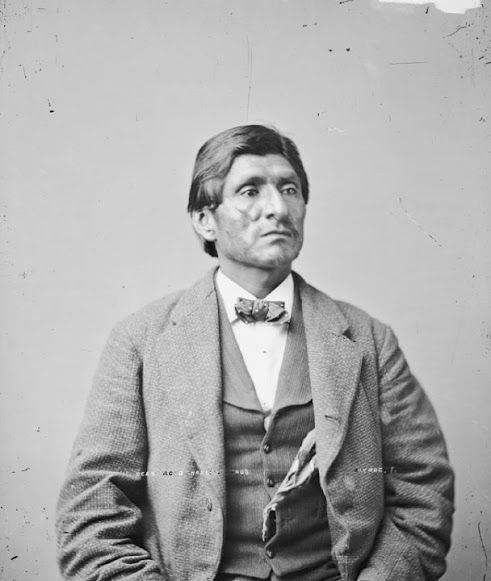 Hey, lots of folks in the frontier West had colorful handles…

One well-known personage whose Western name I hadn’t realized was actually Chinook Jargon? —

Scarface Charley, a multilingual Modoc tribal leader from the Oregon-California borderlands who played a role in what we remember as the Modoc War(s).

When I wandered into reading a book titled “The Klamath Indians of Southwestern Oregon“, I found some fairly amazing “Biographic Notices” texts in Klamath language that brought me this unexpected realization.

I won’t fully transcribe that, but do you recognize the Chinook word that starts that paragraph? The “gloss” underneath, showing the meanings of words, helps. Tchígtchiggam contains a suffix -am that’s like English possessive “-s”. Which leaves you with the Klamath pronunciation of chick-chick / t’síkt’sik ‘wagon’. (Now also ‘car’.)

There’s a story behind that.

By his people, he was known as Chǐkclǐkam-Lupalkuelátko [sic], meaning “wagon scar-faced,” from having been run over by a mail stage when a child, hence the name by which he was known to the whites.

Do you see the other Chinuk Wawa loan word in the text snippet above?

← Native metaphors for disabilities
Nostalgia: Song in Chinook Jargon brings down the house →